The ultimate guide to understanding The Emperor card in any reading 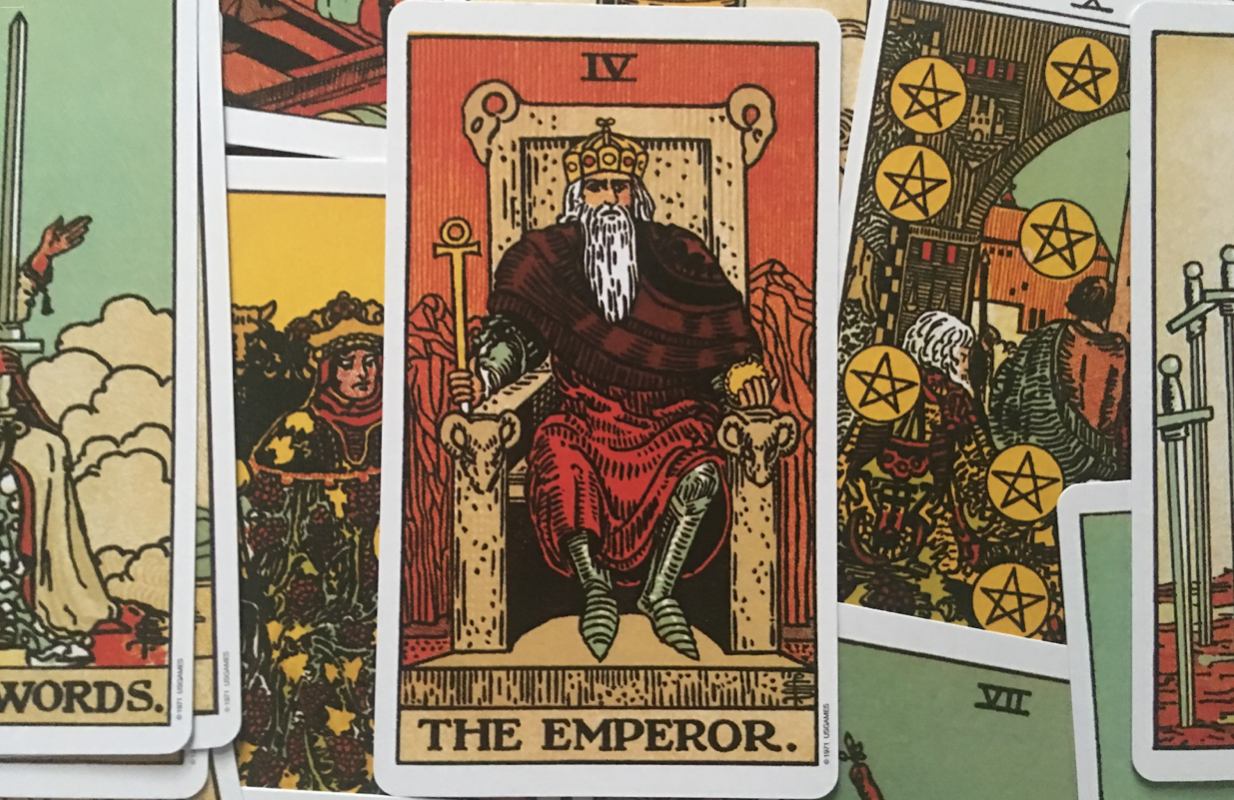 When we think of the word and concept of an “emperor,” we think regal, possibly Asiatic or Arabic, and ancient world. There’s a sense of royalty and power invoked by the word-- an old place where hierarchy and tradition rule. There was a place for everyone and everyone knew their place, and none questioned it.

In the tarot journey, The Emperor card cannot escape these associations, and in fact, they provide keys to understanding its symbolism and meaning.

In this article, we’ll take you through:

The meaning and message of The Emperor

In ancient worlds, emperors ruled by divine right. Their word was absolute law and to cross them was to betray the Gods’ will, risking utter destruction. If the Emperor was usurped, chaos reigned, and the order by which folk lived their lives and said their prayers was destroyed. In many cultures, he was a living God.

So it’s no surprise that this tarot card is associated with rules, authority, control, and issues of power. Sometimes this card even refers specifically to someone with masculine energy who is in a position of power, often someone with either traditional values or sits at the top of a traditional (even patriarchal) power structure.

In tarot, we see The Emperor card as the embodiment of all things archetypically father-oriented, traditional, and hierarchical. He is the opposing and balancing Divine Masculine to The Empress’s Divine Feminine. Where she is creation incarnate, he is order incarnate. She is Mother, he is Father.

Because of both the masculine energy and the “I’m in charge” attitude, it’s probably no surprise that The Emperor is also associated with rules. After all, rules are the type of law. But it’s not just laws and rules in the legal sense-- it’s also in a science or academic sense. The Empress is very artsy and creative, while The Emperor is math, science, and logic.

When The Emperor appears reversed, you have two choices, and it’s up to your personal feelings about reading reversals. Some readers feel that it affects the reading, and others don’t-- some switch, depending upon what their intuition tells them.

Reversals are often thought of as “opposites” of their upright meanings. This is an oversimplification in our books. We tend to think of reversals as blockages or a message that a need of that card’s nature isn’t being met. There’s a sense of lack and need. So if The Emperor appears reversed, and you feel called to read it that way, think of it as a need to tap into the Divine Masculine energy and unblock it-- or a need to apply logical thinking and controlled, methodical, direct action. It could also be an indication that the querent needs to seek out or listen to advice from a wiser person of masculine energy who is in a position of power or authority. They may not want to, but they need to. And then take action based upon that advice.

As a side note, you may have picked up on the fact that we say “masculine energy” instead of the traditional “male person” whenever The Emperor represents a person. Remember that the major arcana are archetypes, and as such, speaking about a person as having “masculine/feminine energy” is more accurate than saying “male/female person.” It’s less about gender or who they are and more about the role they play in your life.

Building your understanding and connection to The Emperor

Tarot is a reflection of self and self’s navigation through life. Taking the time to build a relationship with each card in your deck will give you the tools you need to read not just from rote, but intuition as well. Work with each card individually and deeply, and your ability to interpret the meaning of each card in context of any reading will sharpen.

Developing your relationship with each card’s meanings developing your understanding of yourself as well, and a well-kept journal is a key component to evolving your tarot reading skills. It gives you the time and space to work through a conversation with yourself and the cards, no matter your beliefs around how divination works or your goals in utilizing it.

Questions to ask when working with The Emperor:

It’s also a good idea to examine the artwork of your tarot deck closely. After all, the visual representation of tarot concepts is key to helping us connect to each card’s meaning. In the traditional Rider-Waite-Smith deck, The Emperor is depicted as a stoic, stern-faced older man sitting on a ram-headed throne. He holds an orb in his left hand and an ankh in his right. He is adorned in red cloth and armor. Behind his throne, mountains jut up against the landscape, and a small creek runs in front of them.

Let’s break down the symbolism of the artwork. The Emperor’s older age symbolizes wisdom, and his clothing reminds us of his strength and authority. The ram’s heads connect him to Ares, Mars and Aries-- gods of war and the Zodiac sign. The orb represents his kingdom, and the ankh life-- the two together suggest that he has absolute authority over both, but in his wisdom he will strive for balance, as he knows his authority is bestowed by heaven and can be taken away if he no longer is worthy. The mountains and the stone of his throne suggest that the foundations of his power are strong, but the small creek reminds him and us that he has emotions, but will not be ruled by them. He rules with compassion, but also with certainty and wisdom. He will put the kingdom before himself.

If you are not using a deck based upon the Rider-Waite-Smith or another tarot system, exploring the similarities and differences in artwork can produce some fantastic insights into how the meanings change and stay the same.

It’s also a good idea to explore the concept of Emperors in general. Read up on them, and consider also the message behind the old faerie tale of The Emperor’s New Clothes. Understanding the history and stories related to Emperors will give you more connections for interpreting the card in a reading, which is our next section.

Putting it into practice

The key to interpreting any tarot card lies in combining your thorough understanding of the card with how it relates to the question, while taking into consideration the role the card plays in the reading.

What do I need to do: The Emperor

How do I do that: Five of Wands

What else do I need to know: The Chariot

Next, Jessica breaks down the card meanings:

The Chariot: forward momentum, mastery, power of will

So when we combine the meanings as answers to her questions, Jessica now sees the “story” that the cards are telling her: She needs to look at where she has power and authority, and leverage that more. She may need a mentor to do this, so she takes a mental note to have lunch with a coworker whose journey she wishes to mirror. She also sees that to create the forward momentum she needs-- and to demonstrate her leadership skills-- she should find a way to channel some friendly competition at work.

She has a colleague who wouldn’t mind collaborating on a project with her that takes a fairly competitive approach and asks the right questions that challenge Jessica to do better. Advancing by respectful competition is also a very traditional way to “get ahead in the game,” so taking that route fits with Emperor energy. The Chariot confirms that she will need to leverage this path to gain mastery over her tendency to charge ahead, and she will need to exercise her control so that she balances ambition with wisdom.

Now let’s try switching up one card in Jessica’s reading. You tell us how this changes the reading! Comment below!

All of the major arcana cards carry major energy with them. Pay attention to where and how they show up in a reading. If multiple show up in the same reading, it’s a big indicator that what is at work in your life is much bigger than you think.

When The Emperor shows up, it’s an indicator that you’re at the point on The Fools’ Journey where you’ve taken the tools and now you have the authority. Exercise this power wisely, and recognize where you need to embody this energy in your own life.