As Above, So Below: The Magician 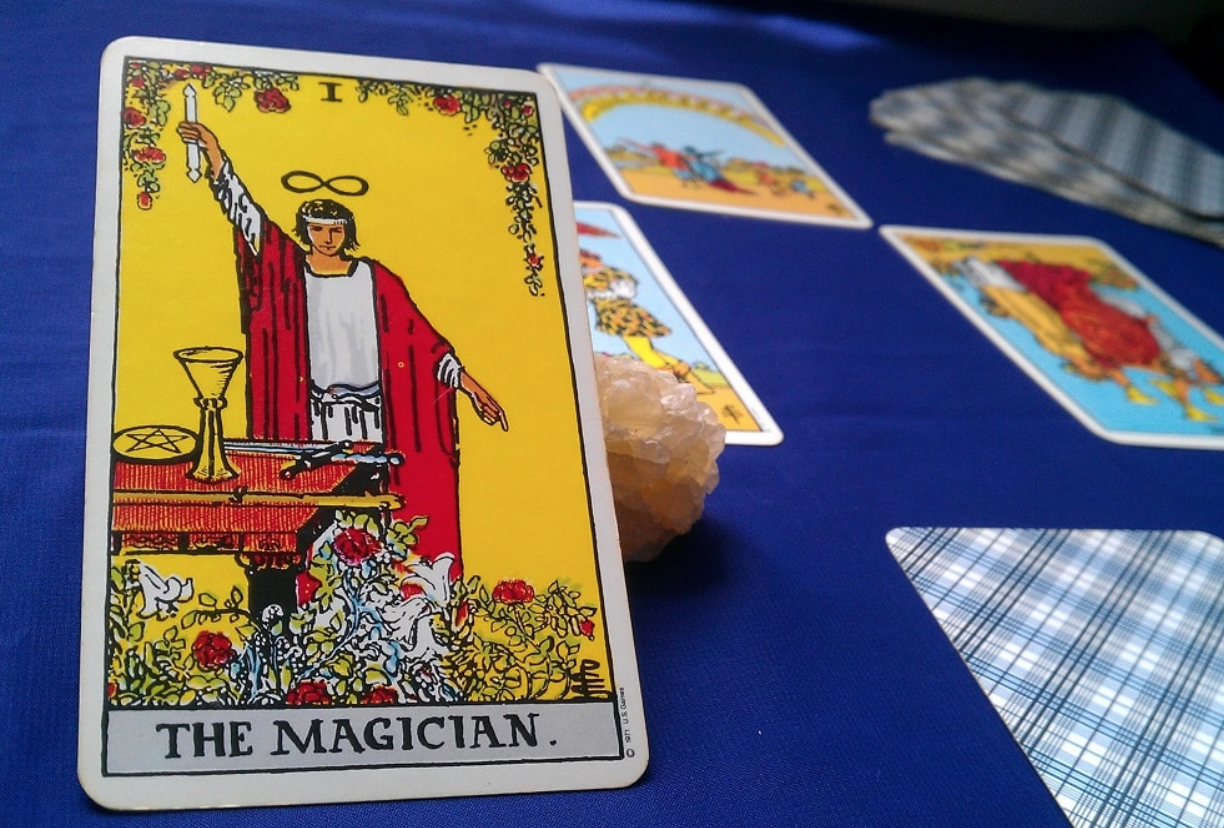 The Magician is not a stage magician who is all smoke and mirrors. It would almost be better to call it “The Sorcerer” to divorce it from stage and street magic tricks and align it with higher level magick. (Magick delineates academic or higher level-- magic is lower level tricks.) In some decks, they do rename the card to accomplish this, or to fit it in better with the deck’s theme.

Be sure to check out the other articles in this Interpreting Major Arcana Cards series!

Though there are no negative or positive cards in the tarot deck, The Magician card is generally regarded as a fortunate card to receive. This is partially due to its meaning, but by and large is due to its message.

The Magician card means that both resources and knowledge are combined with skill. Everything is in place for manifestation. It’s pure willpower, and the desire and ability to transform. On the flip side, the reversed meaning-- should you choose to read reversals-- is wasted talent and manipulation.

And The Magician can navigate freely and expertly between these realms. Everything is in place and balance. If it is out of balance, The Magician acts to restore it.

In your own life, The Magician’s message is that you have all of the tools and knowledge to act, create, and destroy. You also have the willpower. So DO IT. Where The Fool was the leap of faith, The Magician is the informed action taken to deliberately bring about change. Harness the mix of opportunity, skills, and drive that you have within-- the goal you’ve got in mind will materialize and become reality.

The traditional Rider-Waite-Smith Magician tarot card artwork reflects these aspects. The Magician stands before the altar, which is laden with all of the arcane tools-- athame, cup, pentacle, rod-- which symbolizes that all is ready and prepared. They hold a wand in their upraised hand, and the other hand points to the Earth-- this symbolizes the ability to navigate the realms. An infinity symbol floats above their head, and a snake wraps around the waist, symbolizing access to unlimited potential and the ability to heal (think of the snake-staff medical symbol and the corresponding myths) what is out of balance.

It’s also important to remember that The Magician is card number 1 in the tarot deck. Zero, The Fool, starts the deck, but The Magician is the very next card. This is because the blind faith needed to start the journey now must be transformed into determination and real transformation, which you are equipped and ready to do.

Building a relationship with The Magician card

It is important to build a relationship with your tarot deck in general, but establishing one with each card individually will make you a better reader because your intuition and spirit will be connected with them.

One effective method of doing this is meditation. Meditation is especially appropriate for The Magician card, as it restores balance and allows you to exist in a space where the creative process can happen. It opens you to messages and quiets the noise of the mind, allowing you to both relax and focus.

Prepare your meditation space, if possible. Incense such as rose, frankincense, or cedarwood help with both opening the creative process and relaxing the mind. Frankincense is also considered to have divine connections, and it’s often used in church ceremonies. The colors of The Magician are orange, red, and white for creativity, passion, and spirituality. Find the most comfortable way to sit or lie down, and adjust the room temperature so that you won’t be distracted by cold or heat. You may want to stretch a little before sitting or lying down, to loosen up and get out any tension.

Feel free to meditate in your own way, or choose a guided Magician tarot meditation. These meditations are great because they often incorporate visualizations using elements of the card’s imagery and meaning. They allow you to step into the card and become familiar with it from the inside out-- experience it in a more spiritual way.

Another method highly recommended for exploring tarot cards and developing your intuitive powers associated with divination is journaling. This gives you free, unrestricted time to let thought and feeling flow-- which is great for receiving messages and downloads from The Universe.

Here are some questions to get you started:

Reading up on corresponding myths, legends, and folklore helps too. These develop your sense of symbolism and how symbols combine and relate to your life. We suggest reading about Taliesin, Gwydion, and Merlin.

Interpreting The Magician in action

Let’s take you through a sample reading, then give you one to try yourself with some questions to guide you.

First, let’s take you through a simple three-card reading. Maybe you’ve noticed lately that you and your circle of friends have started to become a bit distant-- you’re not spending as much time together anymore, and you tend to not like the same things or agree with each other as much in ways that lead you to believe the circle is breaking up. You ask your cards for advice. You pull the 3 of Cups reversed, the 7 of Swords, and The Magician.

Here’s how we’d process these cards:

If you combine the meanings and weave them into a story, the message is: Yup, the circle is breaking up because it’s become toxic. You know this, they know it, but nobody wants to talk about it or deal with it. You need to create and take the opportunity to meet new folks and build a new circle of healthier friends. You know you can, you want to, so just do it already. Let the other stuff fade away and take the good times and lessons with you into the next phase of your life before resentment sets in.

Now you try it. We’ll take reversals out of the picture to make it easier.

Think about what each card means. The 5 of Swords indicates drama or a conflict, often as a result of dishonor or competition that started friendly and ended badly. It could also mean fighting and winning just for the sake of fighting and winning. You can refer to the “Meaning and Message” section above for The Magician. The 6 of Cups refers to nostalgia, a return to a happier and simpler time, or the return of someone from your past.

Think about how the meanings of each card apply to the situation, and if you’re having a hard time connecting them, ask questions based on the meanings and messages of each card. For example, if there hasn’t been any drama or conflict in the friends’ circle, has a subtle sort of competition started between anyone? Was competition the basis of the friendship? That could be how the 5 of Swords applies. Perhaps has an old flame turned up and one of the friends is suddenly preening and trying to draw their attention? That could be both the 5 of Swords and the 6 of Cups in action. Or could the answer to resolving the conflict, drama, or competition lie in a past friendship that you’d like to renew?

Let us know in the comments below how you’d interpret this reading.

We hope you’ve enjoyed this latest addition to our interpreting major arcana cards series. Be sure to check them out and let us know if you have any tips and tricks to add!