More Fool You: How to Interpret the Fool Tarot Card in Any Reading

An In-Depth Look at the Fool Tarot Card in Practice 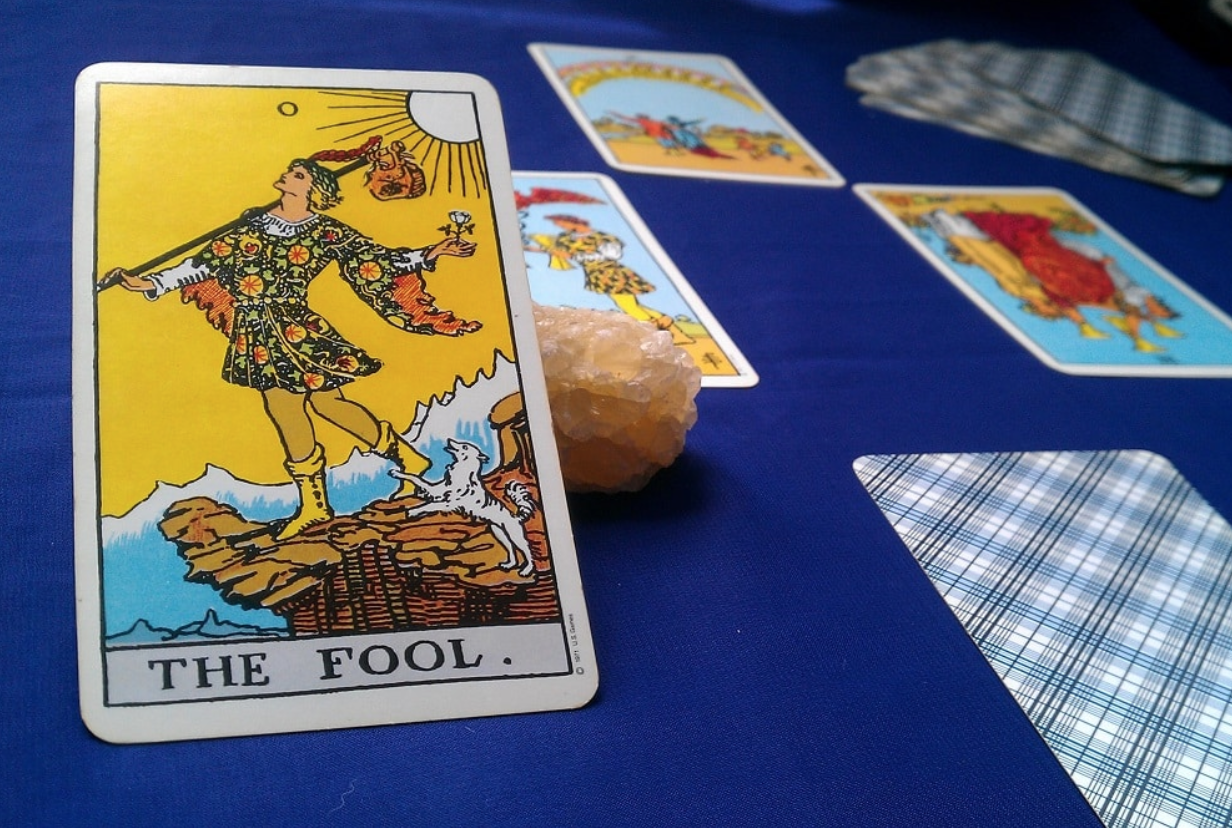 The Fool tarot card is the beginning of the major arcana and the first card in any tarot deck. On the surface, it seems like such a simple card. In fact, many practitioners run the risk of over-simplifying The Fool and the role it plays in the reading. In this article, we’ll take a closer look at The Fool:

What does The Fool mean?

One of the unique things about the tarot deck is that instead of starting at one, like most would expect, it starts at zero. Zero is the number of infinite potential. What that translates to is that the whole wide World (another major arcana card) and future is out there, ready to be shaped and manifested and discovered.

There’s also the Fool’s Journey to consider. Much like the Hero’s Journey (read Joseph Campbel for a great education on all things mythic), the Fool’s Journey starts with a call to adventure. In many ways, the Hero and the Fool run parallel Journeys. Both start with a call to adventure, and both have many lessons to learn and trials to run. Both return to their original starting point, changed, wiser, and more evolved.

The Fool means that a Journey is beginning, and you must walk it knowing that you have no idea what is ahead. There is a naive sort of trust that you must engage with in order to walk the path ahead of you, but it is one you must walk. Be open and without expectations. Shed all fear.

There is another way to look at The Fool that many don’t consider. Those of us who are English Literature or Theatre geeks will be familiar with the archetype of the Wise Fool. The Fool from Shakespeare’s King Lear is a prime example, as is Feste from The 12th Night. A more modern example might be Captain Jack Sparrow from the Pirates of the Carribean franchise. The Wise Fool is someone who is generally not valued for their intellect, but they have evolved in such a way as to have developed a sort of philosophical, clever intellect and are capable of providing great insight into a situation. They are able to see the situation for what it is and cut through social constructs and expectations to the point.

What is The Fool trying to say?

The message of The Fool goes back to the meaning of the number 0-- infinite potential.

The Fool says: JUMP! START! BEGIN! And do it now. You may not feel like you have all of your ducks in a row, but that’s okay. The time to get started is now. The Universe has opened the way for your growth and movement. There’s a sense of immediacy with The Fool card, so stop hesitating and make like Nike-- just do it, already.

When we consider the Wise Fool aspect, the message is similar, but in a more philosophical sense: let go of what you think you know, and be open to discover new knowledge. Become the student again. Those who can continually achieve this state gain a wisdom that no school can teach. The undercurrent of satire involved in the Wise Fool archetype also encourages one to not take life so seriously.

It’s also a good idea to take a moment to look at the artwork of the card. Traditional Fool cards depict a human-- usually male in presentation, and sometimes accompanied by a dog-- carrying a sack over his shoulder and walking a path that is treacherously close to a cliff’s edge, possibly even off it. This symbolizes the need for trusting the Universe-- that a naive trust can be rewarding even if the process is a bit bruising or scarring. But bruises and scars bring experience and wisdom. The bundle or sack over his shoulder? He’s carrying only what he thinks he needs for this Journey. (This idea is further explored in the next card, The Magician.) The dog, if it is included, is simultaneously symbolic of leaving the domestic world behind and The Fool’s connection with nature. The cliff is the zero factor-- the infinite possibilities, both terrifying and freeing.

If the card has different imagery, it’s important to ask why and to examine the changes. In The Goddess Tarot by Kris Waldherr, The Fool becomes Tara, the Tibetan goddess of healing and journeys. She protects humans from the fears that would blight their happiness, and so the card’s message becomes one of protecting innocence.

The Dreams of Gaia Tarot by Ravynne Phelan changes the card again, renaming it “Choice,” emphasizing the idea of possibility while underpinning the idea that all Journeys begin with choosing to take that step. This card then also emphasizes our accountability for choice, and the need to have information to choose wisely-- though this information may be of the heart, not of the head.

When The Fool-- or its equivalent card-- turns up in a reading, consider both its place in the spread you’re using and how it interacts with the other cards.

First, you must also choose whether to read reversals or not. You know that the concepts the card brings to the reading include first steps, choices/possibilities, trust, and journeys. If the card is reversed, this can indicate a blockage preventing any of these from happening. The other cards in the spread should then indicate what that blockage is and actions to correct it. If you are not reading reversals, the other cards and their positions will tell you if it is a blockage or not, and indicate the next steps on the Journey.

Next consider the spread you’re using. The Celtic Cross spread is the one of the most popular spreads because of how thorough it is in answering questions. If The Fool shows up in this spread, whether upright or reversed, it has a definite role to play in the reading. The role it plays is dictated by the spread, and so you must combine the ideas that The Fool represents with its placement within the spread. Then you can look at reversals, if you wish.

It is very helpful-- especially with more complex spreads-- to write down each card, its meaning, its placement in the spread (and its position) either in words or in pictorial form. Doing this first frees up your mind to later go through the whole reading and piece together the story the cards have to tell you.

Simple three-card spreads have very clear-cut positions/roles that each card plays, so it should be fairly easy to string together the story of the cards. For example, The Fool in the past position, if read upright, would clearly indicate that in the past there was a sort of innocence to any Journeys you undertook. The present card would indicate how that’s changed for now, and the future card is the most likely outcome should nothing change. What may be more difficult is figuring out how the story applies to your question/situation, which we will explore in the next section.

Let’s take a look at two examples of how to read The Fool in a tarot spread.

Question: How do I heal from this pain to be open to love again?

Let’s say you shuffle well and pull-- in order of Past to Future-- Two of Cups, The Fool, the Six of Cups reversed. The Two of Cups is a card of attraction, and the Six of Cups in the upright position indicates a nostalgia or old relationship popping back up in your life. Reversed means it's blocked. If we remember that each cards position, our notes should look like this:

But what if you didn’t want to read the reversal, and you were reading for a client? The interpretation of The Fool doesn’t change, but how it applies to the Six of Cups might. In this instance, you would read it as the key to future happiness will lie in the past. We can still figure on the “learn from mistakes” and “don’t rekindle the flame” being true because The Fool is about learning wisdom, and how do we gain wisdom? By learning, especially from work and failure.

The key to reading any card is to combine your knowledge of what it means with where it lies in the spread, and thinking about what in your life it applies to. If you’re not doing the reading for yourself, tune into the feelings of the reading and your intuition. The client may even have ideas themselves.

So when The Fool pops out of the deck and lands in your reading, pay attention. The message you need to hear may require some wisdom.