Ruling Her World: The Empress

How to interpret the Empress card in any tarot reading 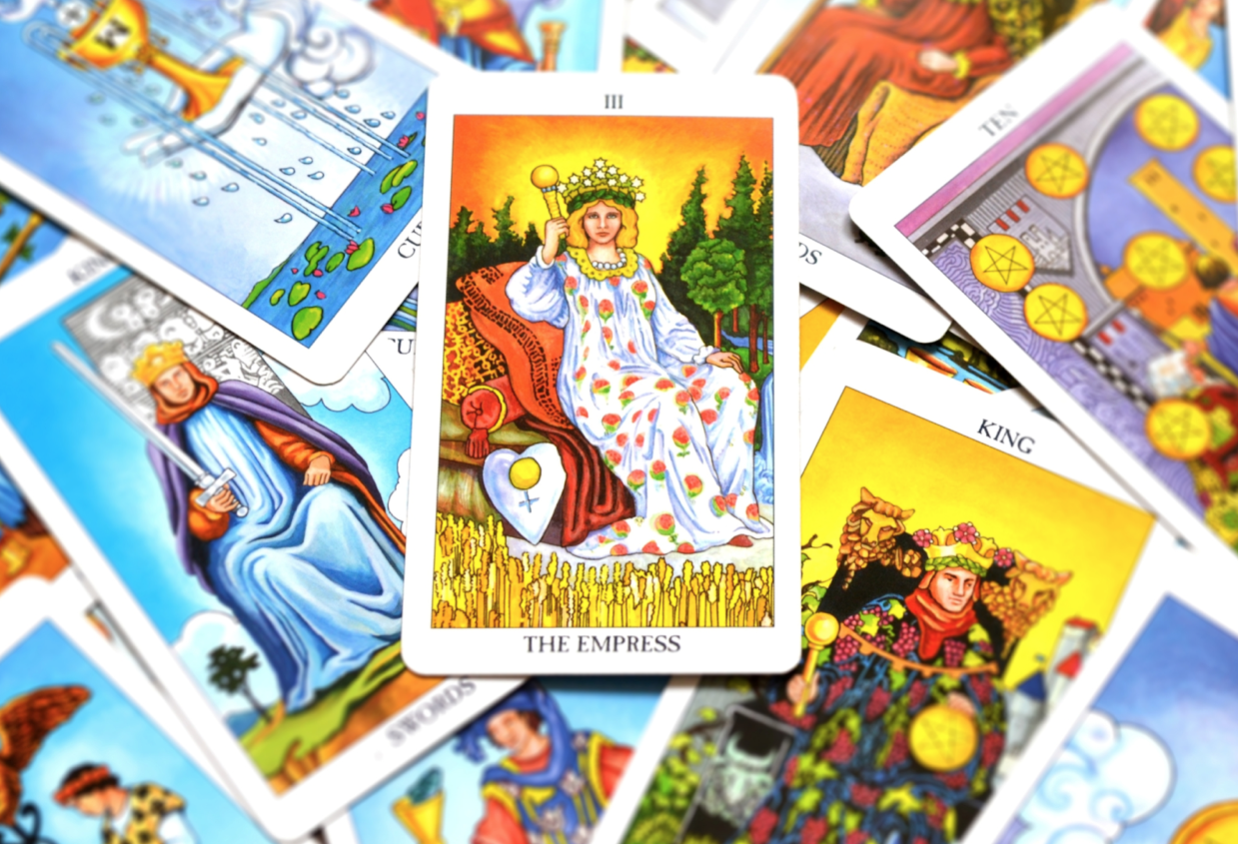 The Empress rules her world with confidence and gratitude. That may sound like an odd combination, but The Empress hails from a time when Sovereignty was a mighty goddess of the land who was the only one to bestow kingship. She knighted her king, not the other way around.

She is woman, hear her rawr.

In our guide to interpreting this card, we’ll discuss:

The Empress means pregnancy… sort of

In some tarot decks, she’s known simply as The Lady. Keywords to remember with The Empress card are fertility, nurturing, and nature. This card has traditionally been seen as a strong indicator of pregnancy. However, in tarot cards in the major arcana are archetypes. Archetypes are not meant to be interpreted literally in every reading. The pregnancy to which the card refers may not be literal-- in fact, most of the time, it’s metaphorical.

The real key to The Empress is the idea of creation. The Empress is a ruler (Sovereignty), and her realm is the land (nature). The divine feminine runs through her, and she wields it intelligently to create. Creation itself is not strictly the domain of women-- it does take two to tango-- so this card should also not be mistaken for applying to women only by virtue of the divine feminine.

Whenever this card turns up, think of it as a call to take charge and see what seeds you can plant and tend to. In love this could mean to make the first move, in career this could mean to take on a new venture or seek out a new market. The flip side of fertility is that just as seeds must be planted, so the harvest must grow-- it could be a sign that recent efforts or relationships are coming along swimmingly.

The connection to Sovereignty cannot be ignored, though. As ruler over the land and bestower of kingship, The Empress can be a call to take charge of a situation or that you’re coming into your power. Alternatively, it could be a call to reconnect with nature-- either your own true nature, from whence your power comes, or the natural world. Sovereignty was a part of the land over which she was charged with care-- to ignore the natural world is to cut off a part of our human nature that still remembers it as sacred.

The number of The Empress tarot card is also not to be overlooked. The number 3 is one of the most common sacred number in the world.

Using the artwork to understand The Empress

In studying and learning tarot, it’s always important to consider the artwork on the card. Good tarot artwork will be rife with symbolism related to the card’s meaning, and can often reveal some of the more subtle aspects of the card.

Traditionally, The Empress’s tarot art includes wheat, pomegranates, and a blonde pregnant woman sitting either on a throne or on the ground. The wheat symbolizes the connection to the earth and underlines the fertility implied by the pregnant belly of the woman. The pomegranates symbolize both fertility and blood, both of which are related to childbirth. Both pomegranates and wheat are sacred to Persephone, a dual Goddess of both Spring and the Underworld who ruled over new creation (Spring) and whose husband ruled over death (Hades). Her mother was Demeter, Goddess of Summer and Harvest. The blonde hair symbolizes the sun and connection to divinity, because of its light color. Sometimes she wears a crown of stars, further underscoring her connection to the divine.

Many of the newer cards keep similar imagery. The Druidcraft Tarot, the Tarot of the Old Path, and the Mystic Dreamer Tarot all keep similar artwork, although sometimes a nursing baby is added. The Everyday Witch Tarot presents these symbols in a different way. The pomegranates are on the trees in the background, and in the red color of The Empress’s dress. The underskirt of the dress has a wheat pattern, and so do her shoes. She wears her crown, wields her scepter, and stands in the forest and fields with a pregnant belly. The wind whips her blonde hair and dress about, but her crown stays strong on her brow. A cat plays at her feet and a dog waits faithfully by her side, which, with the trees and flowers, present her connection to the land.

The Modern Witch Tarot deck features an African queen on a throne that seems to become one with the landscape. Lush grasses sway in the breeze, and a heart-shaped shield with the female symbol etched upon it lies at her feet. The color scheme-- gold and red-- and the crown are all still present, but one of the more subtle and interesting differences is the obvious pride and power The Lady holds in her body. Most Empress cards feature her draped or lounging. This queen sits bold and upright, poised as if she is about to rise and challenge you. She is also not pregnant, though her belly is exposed and the dress shows off her feminine curves. The dress is also white, often a symbol of purity. The symbols on this card show off the power within The Empress position, ready to be wielded and meet any challenges. The crown and shield demonstrate her connection to both the divine and the physical realm or body, and the manner of dress and jewelry-- as well as the landscape-- symbolize a strong pride in African heritage. The Modern Witch tarot itself is feminist and diverse, a tarot deck for the modern woman of the world.

Journal about it, and dig deep

The best way to really understand tarot cards is to work with them, and not just in readings. Study the artwork and get a feel for their energy. It also helps immensely to journal about them. Make notes about the two previously mentioned aspects, but also, consider questions that are more specific to the card in question.

We’ve created the following questions to help develop your relationship with and understanding of The Empress:

Some examples of card combinations

To give you some idea of how to put an interpretation of The Empress card into motion, let’s take a look at some hypothetical readings.

Let’s say that you’re having a lag in your relationship with your significant other. You decide to seek some advice from the cards. You ask: What can I do to bring the spark back? It’s at the end of the day and you’re squeezing this reading in between getting dinner ready and when your significant other gets home, so you keep it to three cards and a clarifier.

You pull the 6 of Cups, The Empress, Strength and at the bottom of the deck is the 2 of Cups. The 6 of Cups represents nostalgia, The Empress creation, Strength is fairly self-explanatory, and the 2 of Cups is Attraction. The 6 of Cups probably represents the way the relationship was at the start of things-- nostalgia for the old spark. The Empress combined with Strength tells you where to find the courage and inspiration-- you need to reclaim your power and stay resilient. To weather this stage of the relationship, think about where the strength in your relationship lies. Dig into it, and build upon it, and the 2 of Cups indicates that the spark will re-ignite.

Let’s try another one. In our next example, let’s say you ask your cards a career question: What do I need to do to get a raise? You shuffle in your preferred way and pull The Empress, The Devil, and then the Ace of Pentacles flies out of the deck. Combined, the cards tell you to plant some seeds-- what can you create at work? Or where can you be more creative in your approach to a project? Is there a new project into which you can sink your hands? The Devil indicates that you should avoid the petty corporate games, inner-office squabbles and drama. Stay out of gossip. Keep your nose clean, so to speak. You need to demonstrate that you’re above all of that, which also shows trustworthiness. The Ace of Pentacles flying out of the deck is a major message! Whenever a card drops or pops out of the deck while shuffling, it means that card is core to the message. Do not ignore it! The Ace of Pentacles indicates the start of a great financial venture-- so if you embody that Empress energy and avoid The Devil’s petty addictions, you should get that raise! (Maybe you can buy a new tarot deck as a treat!)

The Empress is not a confusing card-- her message is all about creation, growth, and the power found in the truest part of the natural self. Don’t shy away from getting to know this card and connecting with it.