Easy Ways to Unblock Your Chakras

How to Recognize When Your Chakras Are Blocked... AND How to Fix It 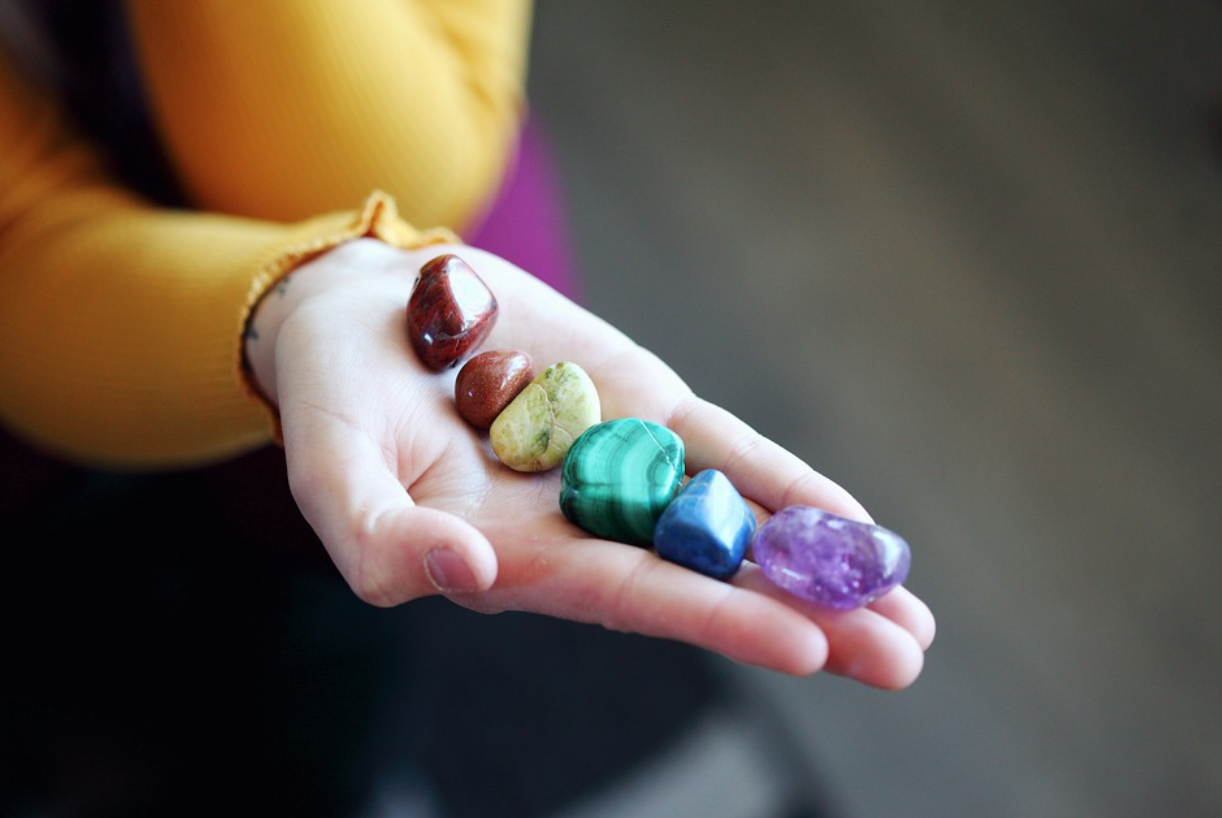 We’ve talked before about what are chakras, so if you’re new to the topic of Chakras you should check that out first and then come back here!

Sometimes our chakras become blocked-- when that happens, there are all kinds of physical symptoms.  In this article, we’ll walk you through:

How to know if your chakras are blocked

Since the chakras consist of energy-- and everything exists in energy before it becomes physical-- when your chakras are blocked you’ll first become aware of physical symptoms, since they’re often harder to ignore than emotional symptoms.

Physical symptoms will emerge in the location of the blocked chakra, and often start as feeling depleted of energy in that area.

For example, a blocked root chakra often feels like anxiety and physical confusion over what is safe-- you feel too cerebral and can’t shut off your brain.  To counter this, try walking barefoot on grassy areas-- research has shown that it has excellent stress relieving benefits.

A blocked solar plexus chakra equals blockages to personal power and confidence.  This can manifest physically as digestive issues such as acid reflux, nausea and gas.  To counter this, Get out into sunny places, or-- since this chakra is associated with fire-- try to sit near a fire.

Blocked chakras also have emotional side effects.  Emotionally, a blocked solar plexus chakra will make you feel unable to make decisions and rather tetchy.  A blocked throat chakra translates to feeling unable to be heard, judged by others, or unable to speak.  Physically, the blocked energy creates a scratchiness or tickliness that interferes with speaking and eating.  To clear this, get out into wide open spaces or reciting mantras that ring true inside of you.

Every bite of food that you put into your body is either medicine or poison-- for both your body and your energetic essence.  So it makes sense that proper diet unblocks your chakras rather effectively-- the other health benefits of eating well aren’t bad either!.  And if you read the “What are the Chakras?” article linked in the introduction, you also know that chakras are linked to color.  So it also makes sense that the foods related to helping unblock a chakra and boost its energy often correlate to its color.

The root chakra is associated with the color red.  So red berries such as cherries, raspberries, and strawberries help light a fire that melts the ice numbing your ability to ground down.  Root vegetables such as potatoes, carrots and turmeric also pull energy down into the earth.  Most proteins accomplish this too.

Our sacral chakra is where our passion and pleasure lives, and where intimacy grows-- back pain and urinary tract infections are often a sign of a blocked sacral chakra.  Orange foods and foods rich in Omega-3s unblock this chakra and nourish its energy: carrots, orange peppers, peaches, apricots, salmon, and sweet potatoes.  Nuts and seeds help too.

The other really important thing to remember about this chakra is that its element is water-- so hydrate, hydrate and hydrate to flush out the blockages!

The solar plexus is associated with fire and yellow-- like the sun, warming away our stress.  Excellent foods to nourish the feel-good flow include favorites like pineapple, corn, bananas and lemons.  All the sunny foods!  Whole grains-- particularly ancient grains-- feed this chakra with complex carbohydrates.  Think farro, spelt and oats.

Let’s not forget the greatest yellow food of all time-- CURRY!  All the yellow and warmth-- or fiery heat-- you could want to transform your solar plexus into your favorite chakra.

It’s rather interesting to note that Aryuvedic medicine associates the heart chakra with the color green, rather than the Western pink or red.  But if you think about it, it makes a lovely kind of sense-- love grows and nourishes our soul more than any other chakra, just like a plant.

To unblock and nourish your heart chakra, think about the heart-healthy greenery you may have disliked as a kid: broccoli, kale and spinach-- the cruciferous vegetables are excellent for this!  Avocados, kiwi, celery and green apples also help.

Best of all?  Mint and limes-- MOJITO HEART JUICE!  Just go easy on the liquor, or skip it altogether!

Throat chakra blockages can really-- and literally-- prevent us from speaking our truth.  Foods high in antioxidants that improve immunity but aren’t acidic enough to to be sour really help.  Blueberries, blackberries, and plums-- blue is the throat chakra’s color-- sustain the vocal energies.

Soothing liquids like raw honey and herbal tea both unblock and calm an overactive throat chakra.  Herbs like slippery elm coat the throat and soothe irritated mucous linings and energies.

This is the chakra on everybody’s mind!  A blocked third eye often creates headaches, blurry vision and insomnia or nightmares.

Treat these issues with dark indigo foods such as eggplant, purple cabbages, and grapes, and purple carrots and kale.  Our old friend blueberries returns, but consider eating them covered in rich dark chocolate-- cacao is considered a superb 3rd Eye unblocker.

See?  Chocolate really does make everything better!  (Or was that ice cream…?)

Crown chakra blockages often result in depression, sensitivity to light, and headaches or migraines.  It has no element, and its color is white.

This chakra doesn’t balance from a particular set of foods, but rather from detoxifying or fasting.

An excellent migraine remedy involves lavender, sage and mint essential oils rubbed at the temples.  But perhaps the best cure is quiet, uninterrupted time with plenty of hydration and very little light.

Tapping + Other Forms of Chakra Meditation

A form of interactive meditation, tapping is often an effective tool for unblocking chakras and focusing your attention to the present moment.  Internet sensation Gala Darling posts tapping meditations as a follow-up to her High Vibe Honey sessions on You Tube.

Tapping is easier than boiling water, because it’s EXACTLY what it sounds like-- find the location of the chakra, and tap on it with your index and middle fingers.  However, as you tap, it helps to recite a mantra that focuses your attention on thinking positively about that chakra’s energy.

For example, to unblock your heart chakra you would tap on the center of your chest or collarbone.  As you tap, you could recite something like: “I accept love into my life.  I forgive myself for feeling angry or unhappy with myself and with others.”

You can also use other forms of chakra meditation to help remove blockages.

Reiki, reflexology, massage, chakra alignment, and acupuncture are all types of energy work.  Based on the scientific principles relating to vibrations and molecules, energy workers are trained to manipulate energy to create flow and harmony.  The results are incredible, and you don’t have to be “hippy dippy” to experience them, either.  Acupuncture and reiki are often recommended by oncologists as part of cancer treatments, after all!

Energy is everywhere-- our entire reality is made up of it and its vibrations.  When our chakras are blocked, we need to take steps to heal them-- just like we would any other mild illness.  Try some of our recommendations the next time you suspect a chakra blockage, and let us know how they work!