With Sword and Head Held High: Queen of Swords 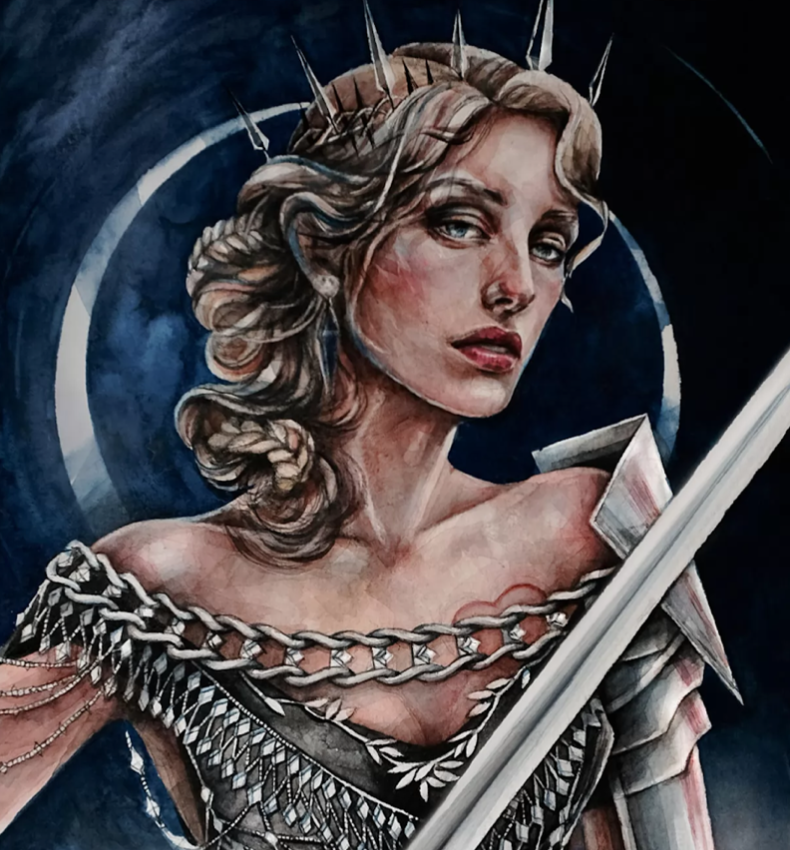 Power, but used wisely. Logic, but used compassionately. This is the Queen of Swords, the tarot card that is one half of the ruling pair of the Swords suite. Like the King of Swords, the Queen has walked through the journey of the Swords suite, and come out the wiser for it. In a suite dominated by a traditionally masculine symbol and difficult cards, this Queen holds both her sword and her head up high, with pride and dignity.

Read on to learn more about this solemn monarch.

Understanding the meaning and message of the Queen of Swords

The Queen of Swords tarot card, like other Court Cards, usually represents an actual person in your life. Additionally, as we’ve said before in other Court Card articles, the gender of the card does not equal the gender identity of the person. This Queen is going to be someone who plays the role of the protector or a mentor who delivers really good constructive criticism. They will probably be a great talker and communicator, and someone who has gone through much suffering but turned that experience into wisdom and strength. Empathy is one of their strong suites, as their suffering has also taught them to defend those who are vulnerable. They are a bit unique amongst the Swords Court Cards in that respect-- not that the others lack empathy, but that they prize logic over emotion. The Queen of Swords strives for balance, while still speaking up when someone is wrong.

When not denoting a person, the Queen of Swords is calling you to be discerning and realistic, or you might be called upon to defend someone vulnerable. Do not suffer fools and call out any you see. This card might also be calling upon you to stand up for yourself, or to give yourself some tough love. Alternatively, you might be going through a period of suffering and the Queen of Swords is a message that you will rise like a phoenix afterwards, stronger and more sure of yourself, and more able to help others.

If you decide to read reversals, keep in mind that it’s “reversed” and not necessarily “opposite.” A reversed Queen of Swords is a person who milks their past suffering and plays the victim, or uses yours against you. They may be mean and critical in a way that deliberately tears you down. Instead of nurturing and being a good mentor, they may be bitter or absent mother figure, controlling and possibly deceitful.

Reversed Queen of Swords Keywords: rudeness, a manipulator, cruelty, dysfunction, pessimism, not learning from the past, playing the victim, absent mother figure

Developing your connection to the Queen of Swords

You can give perfectly good readings just based upon “guidebook definitions” of the tarot cards. But if you really want to amp up your tarot reading skills, take the time to develop a relationship with the cards. Do the research and work through the questions these cards ask you-- you will see more connections in your readings and increase your intuition about what specifically the cards refer to.

As humans are visual creatures, starting with understanding the artwork is, in general, an easy thing to do. The harder part can come with understanding the connection between the art symbol and its meaning if you don’t have an interest in myths, legends, literature, art, or world religions. Many of these things aren’t taught in schools anymore, so unless you have a personal interest in them, you might feel a bit lost. But that’s why this work is so important-- this is the work that builds your connection to the cards.

The Queen of Swords Rider-Waite-Smith artwork features a regal woman dressed in blue robes patterned with white clouds, with reddish-orange details, sitting on a throne adorned with butterflies and cherubs. Clouds billow softly in the blue sky, and she holds aloft a sword in her right hand with her left hand raised in a welcoming gesture.

Like the King of Swords, the Queen of Swords holds a double-edged sword, demonstrating that their skill with words can cut both ways and the logic for which they are famed can cut through confusion and lies. The cloud embroidery on the Queen’s robes emphasizes the Air element connection and symbolizes that logic and honesty have lifted them up to a higher level. The blue and white colors symbolize the Queen’s connection to purity and celestial realms. The element of Air is further symbolized by the winged cherub and butterfly on the throne. The clouds indicate that this Queen is all-seeing and all-knowing, but the reddish orange huge reminds us of their suffering that won them their wisdom. Their raised hand invites you forward, symbolizing that their ear and mind are open to other points of view and can give good advice.

When looking for folklore, myths, and stories with which to further understand the Queen of Swords artwork and meaning, start with stories that feature folks who earn their discernment and empathy through hard means. For example, “The Seven Swans: (or “The Wild Swans”) features just such a heroine, who sees and knows all but will not speak until the correct moment, when she can balance the need to speak the truth with the need to save her brothers. “The Snow Queen” features a queen who steps in to use cold logic to protect a vulnerable Kai until faithful Gerta can save him. Both the Snow Queen herself and Gerta can be seen as reflections of the Queen of Swords, though Gerta may have a touch of the Queen of Cups in her. The Greco-Roman goddess Athena is another to research-- she is the Goddess of War and Logic (war in the sense of strategy).

And we always recommend journaling questions. After all, each tarot card asks us to explore the parts of ourselves that they feature:

Putting it all together in a reading

So now that you’ve learned from the guidebook definition and fleshed out your understanding of the Queen of Swords tarot card, it’s time to put that knowledge to use in a reading. Remember in a reading to take into account the card’s meaning as it relates to the position it holds in the tarot spread, as well as how it relates to the question asked. Look at the other cards-- are there shared symbols? Do you have cards of the same suite or type? And of course, if you read reversals, take those into account-- if you don’t, flip them right-side up.

For example, if Taran’s nine-year-old child comes home from school several days in a row crying over bullying, perhaps Taran decides to do a tarot reading to decide on what and how much of a role she should play in helping her kid handle the bullies. Here’s what her reading may look like below:

Taran remembers what bullying was like, and how hard it was to deal with emotionally and mentally, as well as what the power of a good ally could bring the situation. Since The Hierophant came up, and heartbreak simply isn’t an appealing option, Taran decides to contact the teacher and alert them to the situation. Perhaps the teacher is in the perfect place-- trusted and objective as well as a much-loved authority figure to the children-- to give Taran’s child advice and backup if need be. After all, the bullying tends to take place in school, with no evidence of cyberbullying. The teacher may also be in a less emotional place to inform the bully’s parents of what is happening, so they might be more willing to reinforce discipline.

Now it’s your turn. You need to practice. Let’s switch up some cards for the same scenario, and see what you make of it.

Leave your interpretation in the comments below!

Have you seen the other articles in our series on interpreting tarot cards? Don’t forget to check them out and let us know what you think.