What the Heck are Oracle Cards?

The Newest Divination Wave to Hit the Spiritual Scene 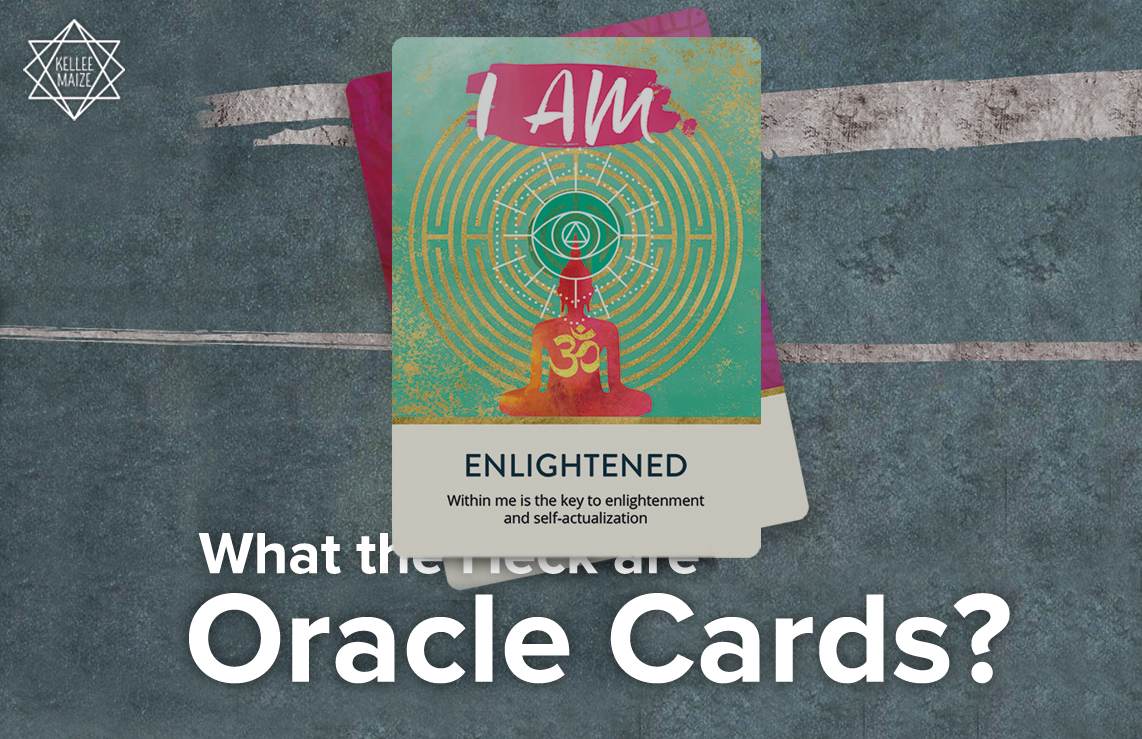 You’ve probably seen them in the bookstore, lumped in with tarot cards in the “Metaphysical” or “Spirituality” section. But they’re not tarot cards.

Oracle and tarot cards have a few key differences to consider:

If you’re not into Greco-Roman history or mythology, you may not be familiar with the word “oracle.” The definition of oracle essentially boils down to a person or thing that gives a prediction or reveals knowledge from a divine source. Famous examples include the Oracle of Delphi, through whom the god Apollo spoke.

The word itself derives from Middle English, which was heavily influenced by Latin and Old French. It originally meant “to speak,” since that was oracles generally did. The same root also gave birth to the word “oration,” which means to give a speech.

Oracle cards generally accomplish the same thing. Most divination practitioners consider the Lenormand deck to be first oracle deck. The Lenormand deck was named after the famed Madame Marie Anne Adelaide Lenormand. She was a fortune-teller for Empress Josephine Bonaparte-- yes THAT Bonaparte’s wife!-- who used a deck of cards designed to her specifications. Madame Lenormand practiced in the 1800’s.

Today’s oracle decks are just as sophisticated but definitely not designed for storytelling.

Tarot decks have a prescribed number of cards--78-- and each deck contains the same cards. No matter which way they’re styled, tarot decks will always have Major & Minor Arcana and Court Cards. They might have slightly different names or appear in different orders, but that’s it. Study and memorize their meanings and you can pick up and use any tarot deck that pleases you. Their meanings are deliberately universal.

Oracle decks are much freer in form. The structure of each oracle deck is entirely up to the creators, so it’s necessary to take some time initially to read the guidebook and learn the cards. Oracle decks have no rules-- unlike tarot-- which means that each card’s meanings and the deck’s usage are very personal to the creator.

The goals of each type of divination are different, too. Both aim to give advice, but oracle decks go a step further. They actually aim to develop intuition and thinking skills in their readers. They’re also often more focused on inspiring readers and prompting self-analysis, rather than the sometimes-somber truth of the tarot. Oracle cards help us to really see the path we are manifesting and show us how to break patterns.

That’s not to say that tarot reading can’t do that either, but oracle decks do it much more accessibly. Tarot has a grandness to it that often scares people away-- oracle cards can feel much more personal due to their lack of tradition.
‍

How to read with oracle decks

Because oracle decks designed to train your intuition, many oracle card readers simply shuffle and choose as many cards as feels right. Once again, this taps into intuition-- your 6th “knowing” sense.

Even shuffling can be different with oracle decks. Most tarot decks are shuffled similar to playing cards. This technique works very well for oracle decks, too. However, many readers will simply sweep the deck around the table to create a mess. Then they channel or meditate or “sense” which cards to pick out.

The idea here is that the correct cards that are needed for the situation will always get picked because the reader is guided to them energetically. Think of it as a gentle divine prodding.

Some guidebooks will have prescribed or suggested spreads, just like with tarot guidebooks. However, oracle cards just don’t lend themselves to the strict, truth-bearing spreads of tarot.

With a few exceptions, of course.

The esteemed, basic 3-card spread from tarot also works really well for most oracle decks. The Past-Present-Future format works no matter what kind of deck you’re working with, as that type of reading can be both literal or metaphysical.

Other oracle card readers will simple keep putting cards down until it “feels right.” Remember-- the goal of oracle cards is to develop your intuition. Therefore, a lot of the oracle reading process can be described as “do what feels right.”

Are oracle cards right for you?

Oracle decks do have the tendency to feel just as overwhelming as tarot cards, just in different ways.

For most, the source of hesitation around tarot centers around the need to memorize their meanings. It can also stem from fear that tarot cards are evil.

Oracle decks-- by virtue of being free from the tradition of tarot-- softens both of these issues. Because oracle cards aim to develop intuition and inspire us spiritually, they develop your Third-Eye Chakra. The oracle cards’ meanings develop for the reader, rather than just simply memorizing lists of keywords. In many cases, readers are highly encouraged to read the guidebook AFTER they’ve spent time getting to know the cards.

Oracle cards are also often themed as widely as tarot cards-- everything from cats to Angels-- but are free from the religious stigma associated with tarot. Think of oracle decks as a less politically charged way to receive divine messages… or just simply as a tool to help you be more in touch with yourself.

A lot of tarot readers will also use an oracle deck to pull a theme or clarification card after performing a tarot reading. Doing this helps the reader focus their intuition on the way that the cards are meant for that specific querent.

As with tarot decks, choosing an oracle deck should rely on… you guessed it! What “feels right.” But while tarot decks are simply thematic variants on the same cards, oracle decks are unique and self-contained. Pick one with whose energy you vibrate, and make sure that you like the style of the art.

It’s important to consider the art in oracle decks, because we humans are highly visual creatures. If you don’t like or understand the art, chances are your intuition won’t have a chance to connect with the cards. You’ll be too distracted by the lack of appeal to to be open to receiving the message.

If you’re intimidated or turned off by tarot cards, oracle cards are a unique alternative with a lot less political and traditional baggage.

Cartomancy-- using cards as divination tools-- is a distinctly fulfilling way to develop spiritually. But if learning tarot seems frustrating or scary, consider oracle cards as an alternative. They’re more personal, and don’t require any memorization or specific spreads to read them.

Just use your intuition.