Ten of Swords Tarot Card - What Does it Mean?

A Starter Guide to the Ten of Swords Tarot Card 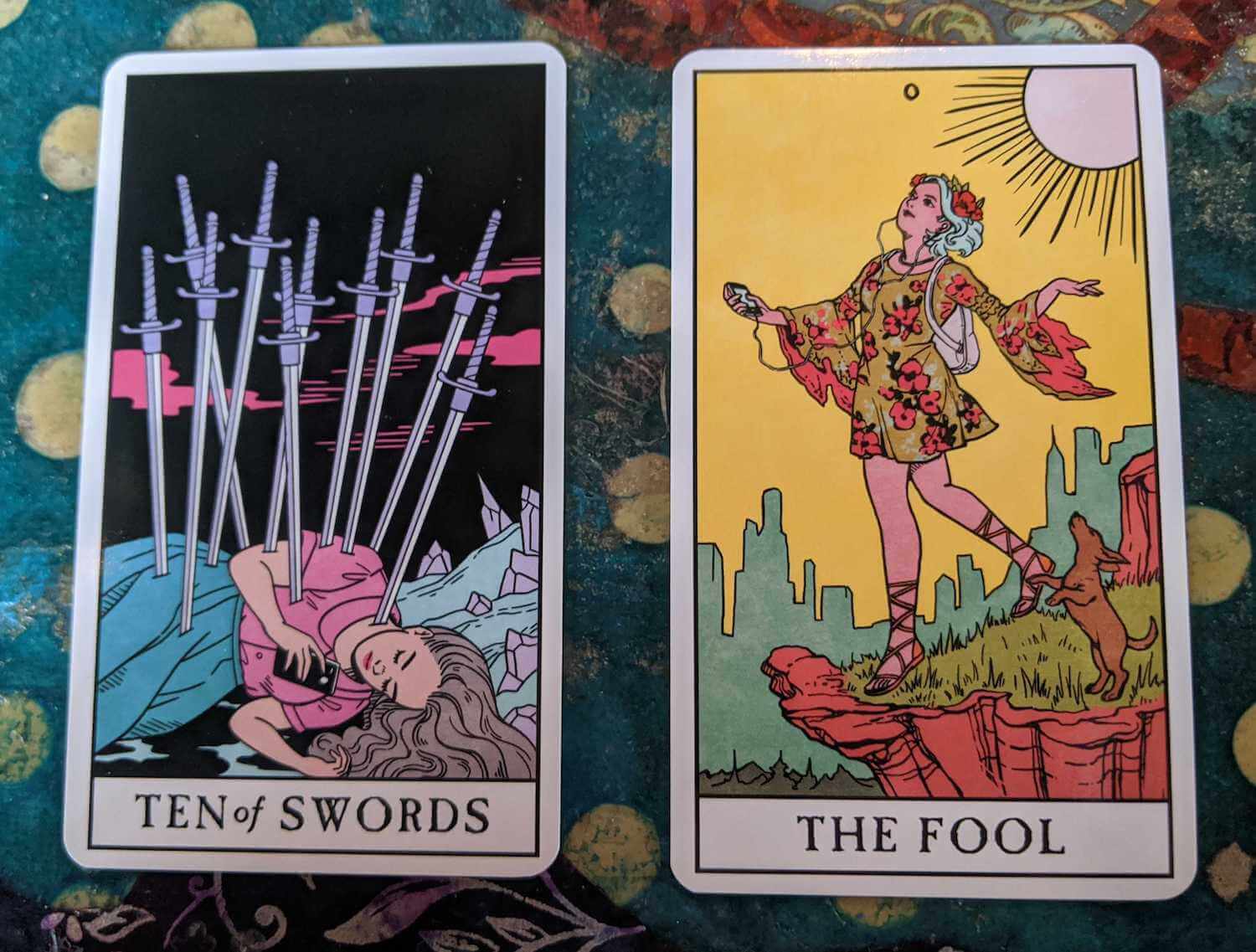 Tarot cards are a mystery to many of us as they have a magical and almost eerie feel to them. They are thrilling, mystical, and frightening all at once, which is what I believe attracts so many of us to the deck of cards.

One specific tarot card, the Ten of Swords, has a particularly strong ominous feel towards it. This is because of its unsettling meaning. Read on to find out more about the Ten of Swords including,

First of All, What Exactly Are Tarot Cards?

Tarot cards consist of 78 separate cards, each with their own meaning assigned to them, and they are used by those looking for some type of insight or ladder to their inner selves.

Why Do People Use Tarot Cards?

Individuals who find themselves using Tarot Cards are often searching for answers in life from the cards. This does not happen simply by the cards predicting the future nor by some type of magic power the cards hold.

Rather, the tarot cards are able to provide answers to those who use them by providing them with a window into their subconsciousness. This window allows these individuals to envision what they would want for their life and helps them make their next decisions.

Tarot cards are also able to help people become aware of something they cannot see on their own. By bringing just the idea of something to the users’ attention, the users of the card may think long and hard about their own life, and discover something there that they failed to see before.

How Do I Use Tarot Cards?

Tarot cards can either be used individually or with another person.

If you are using the cards individually, you can ask the cards a question on your own and pull a card. The card you pull is your answer. Oftentimes, your answer is open to interpretation depending on how you apply the card’s meaning to your life.

Using cards with a partner is only slightly different. With a partner you two will have a conversation in which your partner asks you a question and you draw a tarot card for them. You then attempt to tap into their inner emotions and provide an answer for their question using the tarot card.

Partner tarot card reading can be tricky at the beginning, but with more practice you will get progressively better at it.

Now that we have covered the basics of tarot cards, let’s move onto specifically examining the Ten of Swords Tarot Card.

What Does the Ten of Swords Tarot Card Mean?

The Ten of Swords Tarot Card, as we already stated, is an ominous one, so prepare yourself to move forward. The Ten of Swords Card has two different meanings depending on if it is upright or reversed.

This could signal that you are in the depths of an unsettling life event such as a disintegrating friendship or romantic relationship. If you are not in a state of pain at the moment, the card could be informing you to take a look around at your life and those who are in your life.

Receiving the Upright Ten of Swords could mean that someone or something you hold close may betray you sometime soon, even if it is unintentional.

Dark times pass and once you get through it, there is new life on the other side.

In contrast with the upright meaning, the reversed meaning of the Ten of Swords focuses on a possible past wound that has not fully healed.

Additionally, it is also a message to move on from anything that isn’t serving their best interest.

This could possibly be in the form of a toxic job that you may enjoy at times, but you know is ultimately hurting you more than it could ever help. The card may help you tap into these emotions and come to peace with moving forward without this job.

The keywords for the Ten of Swords tarot card vary depending on if you pulled the upright or reversed version of the card. The keywords of tarot cards essentially give one an abbreviated meaning of a tarot card’s symbolism. It makes understanding the card a little simpler.

For the upright version of the ten of swords tarot card, the keywords are

For the reversed version of the ten of swords tarot card, the keywords are

You Drew The Tens of Swords - Now What?

Drawing the Tens of Swords can seem rather depressing because it is seen as a bad omen either for the future or the present. The first thing you should do after drawing this card is evaluate your life and see how it could apply to the situations you currently find yourself in.

Try not to panic, take a deep breath, and take life one day at a time. If you are currently going through a hard time, you have the strength to push through. This may be the lowest point of your life, but eventually things will turn around. Surround yourself with people who care about you and wish you the best in order to get through this difficult time.

Additionally, make sure to give yourself grace to feel whatever it is you are feeling. It is important to process your emotions rather than attempting to bottle them all up. You have to take care of yourself, and part of that is finding healthy ways to cope with the difficulties in your life.

Experiencing difficult times, such as the ones that the Ten of Swords tarot cards indicate, can be demoralizing and exhausting. However, you must always remember that there is light at the end of the tunnel. Who knows, you may just so happen to draw The Sun tarot card next.

You never know when life will turn around, so keep your chin up and continue to live in the moment while having hope for the future.