What Professional & New Cardslingers Alike are Using to Read their Cards 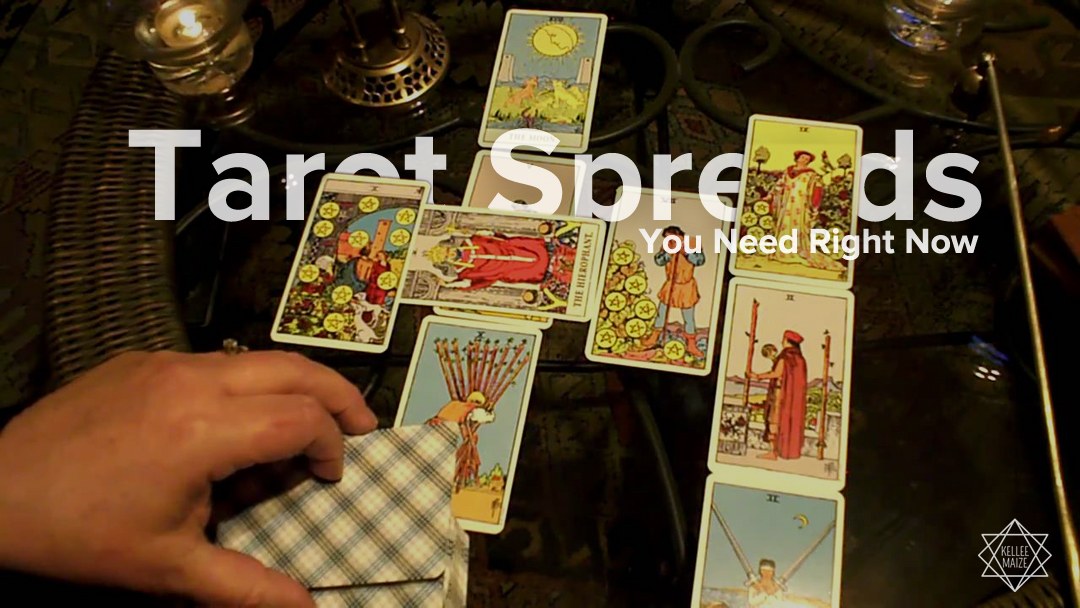 Perhaps you’ve just purchased your first tarot deck-- or you’re bringing home one to add to your collection-- and you’re ready to start working with your cards.  Maybe you’ve skimmed the guidebook or read about tarot in depth (always the best practice).  You’ve carried the cards around with you-- or slept with them under your pillow-- to bond with them and infuse them with your energy.  Now you want to try to actual tarot spreads.

The guidebook to your tarot deck should have a few recommendations to get your started.  Some of them will be specific to that deck, but there are a few spreads that are the most commonly used by tarot readers throughout history, suitable for all levels of experience:

Shuffle those cards and let’s sling them into a spread!

A quick word on asking questions

Before we dive any further into tarot card spreads, it’s important to discuss how to ask your tarot cards good questions.

As any teacher will tell you, asking “yes/no” type questions does not help you learn anything measurable.  It’s the same with tarot cards-- they’re not equipped to handle questions like that.  A pendulum would be more attuned to “yes/no” questions.

But tarot cards are built to help you explore energies affecting a person or situation and the possible-- or probable-- outcomes.  They are simply not designed for black and white answers.

Instead, ask a question that allows the cards to interact with and explore the energy surrounding your query.  For example, instead of asking: “Does he love me?”  Ask: “Under what circumstances would a romantic relationship between us flourish?”  The difference lies in giving the tarot cards to a chance to “discuss” the answer with you.

After all, you’ll learn more from interaction than you will a lecture!

One-card readings are never to be underestimated.  They are the most basic reading of all, but they are the fastest way to practice tarot readings and and effective tool for learning new decks.

It is common practice amongst tarot readers to use this format when working with a new deck.  First-- depending on their particular spiritual tradition-- readers will cleanse their decks  by their preferred method.  Then they shuffle the tarot cards very well-- being careful to focus on the energy of the deck.  The deck is now ready for a reading.

If your primary focus for the reading is getting to know your deck, it is helpful to draw a card every day.  You may re-shuffle the cards each day or not-- it depends entirely on what you feel is right.  Some readers simply shuffle a new deck thoroughly once and leave the tarot cards in a neat stack where they can pick a card from the top of the deck each day.  The card’s energy and meaning provide a focus for a meditation, gratitude practice, or as a guide for their day.

Once you’ve done your “daily draw,” you can either place the card back into the deck for a new shuffle, or you can leave it in it’s own pile.  There is no right or wrong way!

The next most popular tarot card spread is the 3-card spread.  It’s quick, easy, and a great way to practice deciphering how cards interact with each other to form a story or an answer.

The first 3-card spread-- probably also the most common-- is the Past, Present, Future Spread.  This tarot card spread is used to gain clarity on a person or situation that had, has, and will have a future connection to you or the querent.

Shuffle the deck with the question, situation or person in mind.  Once you’re satisfied that the cards are properly shuffled, lay the top three cards out in a row.  The first card is the Past, the second is the Present, and the third is the Future.

The Celtic Cross is perhaps the most eloquent and useful tarot card spread of all.  It provides a  thorough and detailed description of both the problem/person and the outcome.  This tarot spread can be a bit daunting for new cardslingers-- because of the number of cards involved and the complex interplay between them-- but it is definitely a spread to utilize often.

After you’ve shuffled your cards while concentrating on your question, place the first card down.  That’s “you” in terms of the question.  Place the next card across the first-- this is “what crosses” or blocks/helps you.

The next four cards are placed in a specific pattern around these first two: directly above & below, and to the left and right.

The cards above and below represent your “higher self” or your hopes/dreams.  The card underneath represents what is “below you” or your sub/un-conscious self.

The left card represents influences from the past, and the right card can indicate either what is “before you”-- meaning the immediate future-- or anything from your psychological or emotional state that influences the issue at hand.

Next, place four cards in a vertical row from bottom to top.  These cards represent, respectively: the way others see you, environmental influences, your hopes/fears, and finally the most probable outcome of the matter.

Some tarot card readers like to flip the deck over and check the bottom of the deck for a clarification card.  This can great help with interpreting the story that the cards are trying to tell or offer advice on achieving the outcome.

A year ahead spread

A Year-Ahead spread is exactly what it sounds like: draw one card for every month of the year.  Some practitioners will include a 13th card as their theme or “card of the year.”  Think of it as a kind of energetic or spiritual New Year’s Resolution.

Typically, this is done on one of three days: your birthday, Samhain, or New Year’s Eve.  Each of these days represents the start of a new year in one way or another.  It’s also perfectly acceptable to do a Year-Ahead spread on each of these days-- think of it as like a self check-in to see how you’re doing spiritually.

Your birthday is an excellent time to practice this tarot spread, as it can feel more personal.  After all, you’re starting a whole new year of your own life-- nobody else gets to tell that story!  Doing a Year-Ahead spread on your birthday can help you target areas of growth and expansion for yourself on a day as closely tied to you as possible.

Samhain-- pronounced “sow-wehn”-- is known as Halloween to most of the world.   Agricultural societies in ancient times measured their calendars by the moon cycles as the changing of the moon-- it was a more reliable way to tell the progression of the growing/planting/harvesting seasons.  Samhain is an old Celtic word for the final harvest of the year, which indicated that the year was closed and a new one forthcoming.  As many tarot readers are also witches or pagans, they have continued to accept Samhain as their spiritual New Year.

New Year’s Eve is also a popular time to do Year-Ahead spreads, for obvious reasons.  It doesn’t matter how spiritual you are or aren’t-- anyone can appreciate and connect to the idea of New Year’s Eve.  Our world runs largely on a solar calendar, so it can be easier to “map out” your Year-Ahead spread on this holiday as opposed to others.

There are other tarot card spreads out there.  Many tarot card readers post suggestions on their social media, along with their daily 1-card spreads.  Once you’re comfortable with reading your tarot cards with these traditional spreads, try making your own!  Don’t forget to comment your experiences with these spreads, and tag us on your social media when you try them!  Better yet… tag us when you create new ones!  Happy cardslinging!