From Diversion to Divination: A Brief History of Tarot Cards

How tarot cards developed from card games into a divination phenomena 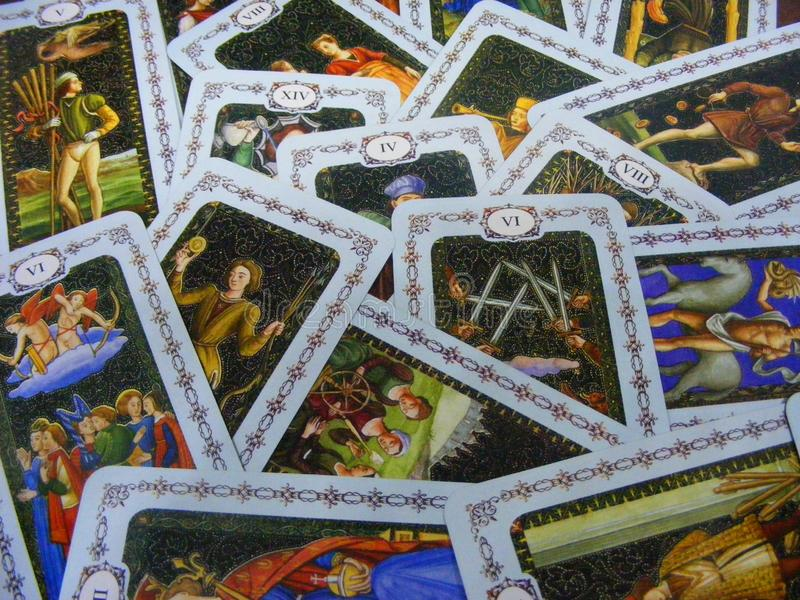 Tarot cards are a form of divination used by spiritualists, witches, and even psychologists. Most Tarot decks consist of 78 cards-- the number can vary from deck to deck-- that are divided into three types: the Major and Minor Arcana, plus the Court Cards.  We’ll get more into that later.

Tarot’s backstory is just as interesting as watching a reading unfold. Let’s take a moment to explore its history:

Perhaps you’re an experienced “card slinger,” or perhaps you’re a dabbler. Either way, knowing a bit more about Tarot’s history will add a new layer of meaning to your relationship with the cards.

What the heck ARE Tarot cards anyway?

Tarot cards are a form of divination-- perhaps the most popular.  There are three main types of cards: the Major Arcana, Minor Arcana, and the Court Cards.  The Major Arcana are the first 22 cards that relate to archetypes. The Minor Arcana consists of around 56 cards that are divided into four major groups. These groups are called “suites” and relate to each of the four elements: air, fire, water and earth.

Within each group, the cards are further broken down into Aces through 10s and Court Cards. The Court Cards represent actual people in your life or messages specific to you.  Each tarot deck is unique in theme, but many follow this familiar structure.

During a Tarot reading, the reader will shuffle the deck while channeling a question. Readers can choose to lay the cards down in spreads-- blueprints for reading the answer-- or to lay them down intuitively. The reader then interprets the cards to answer the question.

We don’t REALLY know where tarot cards came from…

There are a lot of really good theories about the origins of tarot cards, some of them based on accurate historical information. The likeliest origin story hails from Italy and France, where playing cards were invented in the 14th Century. These cards were inspired by similar cards used by Islamic societies that traders brought home to England.

The cards were divided into four suites, just like today: wands, coins, cups, and swords. Eventually, the social elite who played the game-- called “Trumps”-- wanted to personalize and expand it.

The Duke of Milan-- Filippo Maria Viscoti-- hired his favorite artist-- Bonifacio Bembo-- in the 1440’s to create a personal deck that is still on display today. Many other social elite followed his example, and hired artists to design new cards tailored to their tastes. Some featured their families as the Trump cards.

By the 16th Century, the card game had reached France, where it continued to evolve. The Tarot de Marseille demonstrates that the imagery had started to standardize, and became mass produced. At this point, deck styles and productions passed back and forth between Italy and France.

It was also around this time that it began to be used for divination in the French Occultist groups, who saw more symbolism in the pictures than previous generations.

Jean-Baptiste Alliette was a major player at this time; he even wrote a treatise on the subject.

By the 1800’s the power of the church had largely diminished, and an era of Occultism began.

Many with an interest in anything non-Abrahimic cherry-picked mythology and Eastern religions formed lodges and collected followers. However, it wasn’t until Kenneth MacKenzie decided to visit French occultist Eliphas Levi that English-speakers had access to Tarot cards.

He also revamped Levi’s Tarot system to include symbolism from Hebrew, the Tree of Life, and Astrology. Additionally, MacKenzie switched the order of the cards-- to this day, we still list The Fool as the first card in Tarot decks. This eventually became the Rider-Waite deck.

Aleister Crowley later developed the Thoth Tarot deck. The Rider-Waite deck had an American publisher, so Tarot jumped across the pond!

The Stone that Skipped across the Atlantic

The Rider-Waite Tarot was a huge turning point for Tarot. First, it was in English--not French or Italian-- and second, it was illustrated by a rather unique Jamacan-American woman named Pamela Colman Smith. A true original, she was professionally trained as an artist at the NCY Pratt Institute. She left before she could attain her degree, and moved to England.

There, Smith set up shop and illustrated manuscripts for Bram Stoker and William Butler Yeats. Both men were members of the Golden Dawn, and it was Yeats who inducted her into the Order. There, she met Arthur Waite in the early 1900’s and the two developed the classic Rider-Waite deck.

Though Smith was allowed a large amount of freedom in the designs, her name was never added to the deck. Instead, Smith passed into obscurity.  Some practitioners term the deck “Rider/Smith-Waite” or “Smith-Waite” in an effort to acknowledge her.  However, Rider-Waite is more common.

The Rider-Waite deck also was the first deck designed and used specifically for divination purposes. Its images were intentionally laden with symbolism and meaning. However, they were also easy to understand.

By 1915, an Egyptian deck by French occultists Falconnier and Wegener in 1890 became popular in America. The de Laurence publishing company sold pirated copies in 1918 to American audiences, who used Waite’s book The Pictorial Key to the Tarot to learn in-depth how to use them as a divination tool. Eventually, it outsold the Egyptian deck.

It wasn’t until the 1960’s that Tarot became firmly implanted in the American spiritual scene. Businessman Stuart R. Kaplan was at a toy fair in Nuremberg, when he spotted some unusual cards. He recognized a business opportunity, and pounced. Eventually, he founded U.S. Games Systems and purchased publishing rights to several Tarot decks, including Rider-Waite.

As Kaplan learned more about Tarot, he wrote the beloved Encyclopedia of the Tarot. The book not only covers the entire history of Tarot-- in detail-- it also modernized learning Tarot in a unique way.

Kaplan also believed that the Tarot was like a book, and that readers brought their own interpretations to the cards’ meanings. In 1969, The New Tarot: Tarot for the Aquarian Age by John Cooke and Rosalind Sharpe was published. Cooke and Sharpe used another divination tool-- the highly controversial Oujia board-- when creating the deck. The introduction in the guidebook ended with the radical idea that Tarot card images were archetypal and therefore memorizing their meanings was no longer needed.

Readers had only to unlock their own subconsciousness to understand and use Tarot cards, and idea which continues to grow in popularity.

Tarot continues to grow and change, with decks reflecting major cultural and social shifts. There are LGTBQ+ themed decks, Goddess-oriented decks, and even decks that incorporate the Bible.

Guidebooks are careful to present intended meanings alongside tips for personalizing the experience with the reader’s own impressions. Many of them include questions aimed at developing a deeper relationship with the cards-- some even include Tarot meditations.

The Indie Tarot Deck scene has also exploded. Creating and publishing a Tarot deck is no longer the sole issue of major publishing companies such as U.S. Games and Llewellyn’s. Indie decks such as The Wild Unknown illustrated by Kim Krans have reached unexpected popularity among Tarot enthusiasts.

Reading Tarot cards has also become a professional business. Tarot reading for money is not a new concept. However, online witch and spiritual schools offer certification in Tarot Reading.

Social media popularity means that professional Tarot readers can now reach a world-wide audience. Shawn Engel of WitchyWisdoms not only uses Tarot to encourage interaction on her social media platforms, but she also uses it as a tool in her Boss Mystic Bootcamp that teaches spiritual entrepreneurs how to build a successful business.

Influencers such as Mr. Lionharts popularize tarot in inviting and interactive ways. Mr. Lionharts runs monthly Tarot challenges-- each with their own hashtag-- in which thousands of readers of all experience levels participate.  Each challenge is designed to help the reader develop their relationship with their Tarot cards and practice reading them in context.

Practioners use tarot to understand and relate to a wide variety of topics, ranging from personal daily tarot card pulls to tarot politics.

Tarot isn’t going to lose any of its appeal. With decks ranging from the familiarly structured Rider-Waite to the latest indie production, Tarot is simply gearing up for its Golden Age. Find a deck that appeals to you, and get shuffling. An adventure awaits you!