In the Temple of the High Priestess

How to interpret The High Priestess in any tarot reading 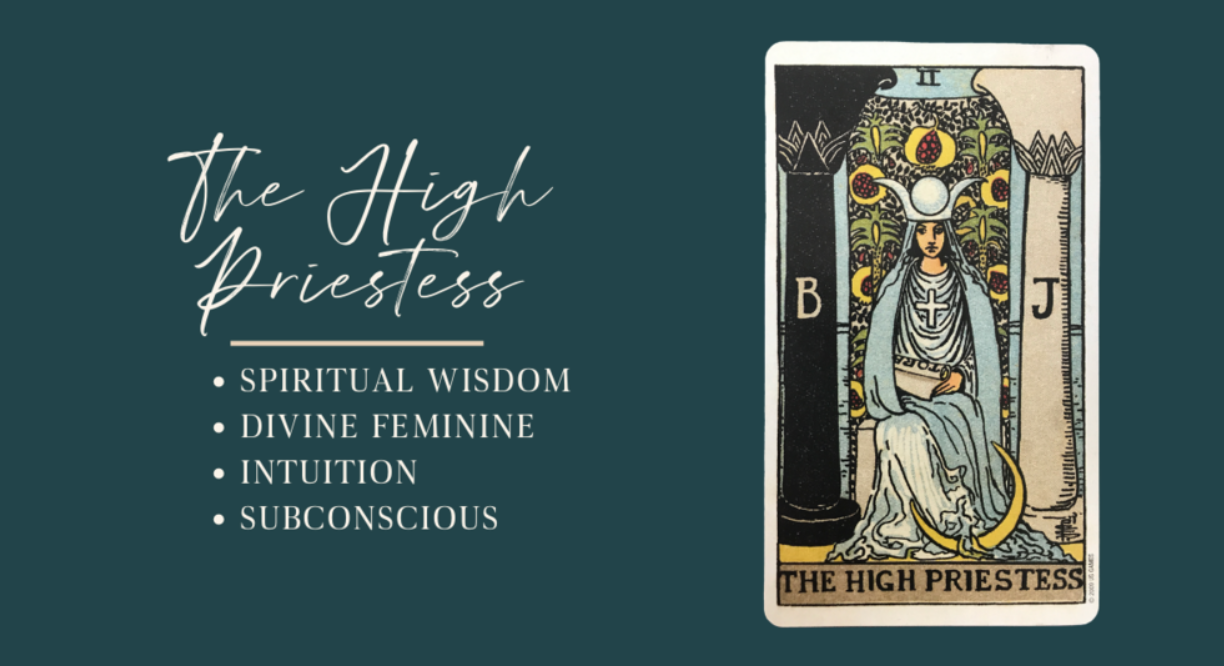 Image courtesy of The Self-Care Emporium.

The High Priestess is numerically assigned 2 in the major arcana, and is the third card in the deck-- The Fool being 0 and The Magician number 1. Some may be tempted to assign her similar meanings to The Empress, but this would be a mistake. Where The Empress rules, The High Priestess lets go of the illusion of control without engaging in chaos.

Let’s explore The High Priestess together:

What The High Priestess means and her message

The High Priestess means that intuition is needed to understand the mystery at hand, or that there is a mystery which reason cannot solve.

So it makes sense that the High Priestess tarot card indicates a natural wisdom born of faith and experience rather than books and facts. But what is intuition? Intuition is when you know something through instinct, not through conscious reasoning. Instincts are developed through evolution and experience and often inform decisions made that defy logic. Logic has its place, but when The High Priestess appears, it’s time to put that aside and look within.

There is a higher power at work when this card appears. It may also indicate the presence of a teacher or mentor, or that such a role is coming to you, or that more knowledge is needed before a decision can be made.

Pay attention to dreams, signs and portents. If symbols, numbers, words, or objects keep appearing and repeating themselves in your life, look them up because those are messages from the Universe.

Got that little niggling suspicion? Does logic and intellect tell you one thing and your heart and instincts another? Pay attention to those feelings. Do you see a choice or decision and just KNOW what you need to do, even though you should doubt it? Trust that.

All tarot artwork is rife with symbols and allusions that, when understood, deepen your connection and comprehension of the card’s meaning and message. Be sure to keep up with reading mythology, sacred texts, folklore and such to ensure that you keep this knowledge fresh and growing.

The High Priestess artwork classically includes the priestess sitting or standing between two pillars, wearing a crown of Isis and a solar cross. A crescent moon is either at her feet or included somewhere in the picture.

The pillars symbolize Solomon’s Temple, and the pillars are referred to as Jachin on the right-- “establishment”-- and Boaz on the left-- “strength.” The modern tarot is steeped in Judaic traditions and mythology, as its creators-- Rider, Wait, Smith, and Crowley-- studied Kabbalah magickal traditions, amongst other world religions, and were widely read in mythology. The pillars also indicate natural duality-- feminine/masculine, right/wrong, logic/emotion, etc. The High Priestess stands between them, indicating that she is the middle road.

The High Priestess does not judge the pillars and what they represent. To her, they are both equally important and neither should be subject to the other. She is the path of balance, which is why she is so closely related to intuition, as intuition is a kind of unquantifiable knowledge.

The crown of Isis, mediator between life and death and queen of the Egypitan god pantheon, sits upon The High Priestess’s head. The crown is another indicator that she is connected to the divine feminine, and reinforces the concept of the middle road-- just as Isis used her powers to magic her dead husband Osris whole again so that he was neither dead nor living (the first mummy).

The crescent moon also reinforces the idea that some is known, but trust is needed to gain access to what is unknown. This also connects The High Priestess to the divine, and the solar cross connects her to the earth. So once again, she’s the middle road.

In the Tarot of the Old Path, some of these traditional symbols are echoed in the artwork for The High Priestess. Here, the moon is present as part of the crown, as well as replacing the two pillars on either side as a dark crescent on the left and light one on the right. She wields a wand and is dressed in translucent blue, which indicates her magickal powers and her connection to divinity. She is surrounded by a black cat, unicorn, rabbits, butterflies, a snake, a squirrel, and a deer which both connect her to the earthly realm and symbolize mysteries-- each of these animals has both magickal connotations and part of their lives remain mysterious. In the case of the unicorn, faith is required, much like trusting in the middle road.

In the Wild Unknown Tarot deck, The High Priestess is a white tigress. A crescent moon hangs in the dark sky above her, and a globe of purple, white, and blue lies between her paws. White tigers symbolize spiritual awakening and vision. The unusual and rare white fur marks her as magickal and a walker between worlds. White, purple and blue are all colors associated with divine feminine and royalty.

In the Tattoo Tarot deck the artwork is inspired by the Old School style of tattoos. The High Priestess sits on a throne, so the pillars are replaced by the armrests. The crown of Isis and crescent moon are still present, and stars now decorate her robes. She holds a book open in her lap, but she’s not reading it. Seated, she is grounded, but the stars and moon connect her to the divine. The book symbolizes intellect and logic, which she’s considered, but she’s simply holding the book open and chooses instead to look for her answers elsewhere.

Similar to The Empress, The High Priestess is also connected to Persephone, a goddess who walks the line between life and death as both Spring-bearer and wife to Hades.

It’s also recommended that you read about Mary, the Mother of God, as many aspects of goddesses were incorporated into her. She also walks a middle road as she ascended into heaven-- meaning she never died, she was taken body and soul into heaven, the realm normally saved for those who have died or are angelic beings. In this way, she is also simultaneously connected to both earth (body) and the divine (soul/heaven).

Keep in mind that depending upon which Christian sect whose texts you are reading will affect the story told-- for example, Catholics believe that Mary stayed a virgin for life, while other sects do not and tell of Jesus’s siblings. In some ways, this lack of cohesive Mary mythology underscores her middle road aspect.

The High Priestess in Action

Let’s work through an example reading to give you an idea of how to put all of this together. For simplicity’s sake, we’ll stick to a three-card, past-present-future style reading.

Let’s say that you’ve been experiencing a lack of close friends-- you’re feeling blue, and you notice that a lot of the relationships you used to have are now distant. They’ve become more acquaintances than friends. You’ve also had a romantic dry spell-- you can get dates, but nothing becomes serious. You decide to ask the cards what’s up with this. You shuffle, and these lay out Six of Cups, Judgement, and The High Priestess.

Here’s how the interpretation process works:

Tarot always tells a story, even when giving advice. Think about what the card means, but also think about how it relates to the parts of the story it’s supposed to tell in the reading. In this case, The High Priestess was in the Future position, but given it’s meaning, it felt more like advice for a happier future than an outcome.

So now you have the knowledge, go develop the intuition-- check out our recommended reading, and take some time to journal with The High Priestess. And don’t forget to check out the other articles in this tarot series!