A guide to moon rituals appropriate for the first lunar quarter. 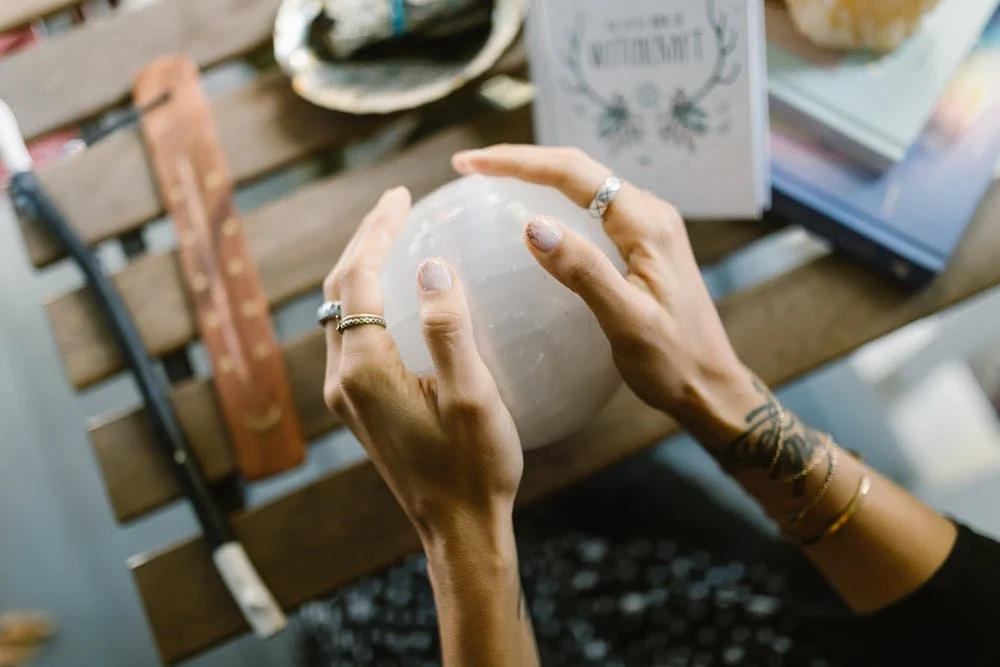 People have been communing with the moon for centuries. There are tons of myths and wives tales about the powers of the moon and how humans can harness it to provide good for themselves. The moon goes through eight phases, and each of them offer different opportunities and specific symbolic energy to tailor your rituals to for different intentions and results.

The first quarter moon phase is an opportune time to check in on yourself and the progress you have made. This is the phase in which your intentions will begin to establish themselves. Before performing any ritual, it’s a good idea to clean and neaten the space you plan to perform it in. Having a consistent ritual space in your home is also recommended, and creating an altar to hold sacred ritual items in that designated space throughout the phases is ideal.

Make sure to get rid of clutter, burn sage or incense, light a candle and play some soothing music. You will also need some materials, including paper and a writing utensil, divinity cards,  “potions,” oils, specific crystals, salt to draw a sacred circle, and you may also want to make note of the four directions.

Casting a circle is an ancient practice that serves the purpose of creating a protective barrier between the summoner and what you are summoning. This is helpful in case anything goes wrong, and it also just serves as an extra safety barrier which is never a bad thing.

You're going to want to find a flat and open area in your home. Make sure you take note of the four directions, north, east, south, and west. Then, put an object that represents each of the four elements at the corresponding direction points in a circular shape. Earth = North, Air = East, Fire = South, Water = West.

Once you have all of your items in place, you can begin to call on spirits from each direction and element group, in an order of East/Air, South/Fire, West/Water, and North/Earth. You do it in this order so that you end facing north. As you call on each spirit, turn in the direction of each of them and their locations, and say, for example “fire spirits, I call on you.” As you call on each spirit, you will want to think about each element. Think of heat for fire, wetness for water, wind for air, and the feeling of the ground under your feet for earth.

Once you’re done calling the spirits, you should be facing north. Stay in that position, and become aware of your feet. Imagine sending columns of warmth and light down towards the center of the earth, and then imagine pulling warmth and light from the center of the earth into your body. After that, say, “Mother Earth, I call on you.” Next, imagine sending the columns up through your head and into the sky, atmosphere, and milky way. Then imagine pulling warmth and light down from the atmosphere. Say “Father Sky, I call on you.” Surrounded by the warmth and light, you should feel safe and content. Express gratitude for the support of the Divine. Say “thank you, thank you, thank you. The circle is cast, blessed be.”

Now you can close the circle. To do this, you will face each direction again and thank them for their presence by saying “Fire you were here, and I thank you.” After you have addressed and acknowledged each direction and element, say “thank you, thank you, thank you. Blessed be, and so it is, so mote it be.” Take a moment of pause, and then say, “The circle is open, but never broken. The love of the Goddess is forever in my heart. Merry meet, and merry part, and merry meet again.”

Sacred moon water is good to have on hand to use throughout rituals. Make sure to cast a circle before you make your moon water to ensure that it is sacred.

You’re going to want to start with a glass of water. This symbolizes the water element. Next, you’ll add salt, representing earth. Then, you’ll burn incense over the cup, representing fire. Lastly, you’ll blow the incense out, representing air, and you’ll place the incense in the cup. You now have your sacred moon water. You can use it in rituals to cleanse and anoint things with holiness, and you can also use it to cleanse yourself and to drink.

Practicing breathing to increase calmness and relaxation is key for any moon ritual. A basic starting point is the practice of belly breathing, which entails taking a long, deep breath into your abdomen, holding for a moment, and then exhaling slowly. There is also a method called four count breathing in which you breathe in for four counts, hold for four counts, and exhale for four counts. These techniques will help calm you and get you in the ideal headspace for moon rituals.

Movement can be anything you like, from yoga to sprinting. The purpose of movement is to release energy from your body and get yourself in a relaxed and calm space to begin your rituals. A fun movement idea is to channel your favorite animal and move as if you were that animal.

Visualization is another word for meditation, except for that your meditation becomes specific. Manifesting is a form of visualization in which you visualize having the thing/person/job/financial status etc., you want already in your life to imagine it into existence.

The seven chakras (wheel, in sanskrit) are the primary energy centers of the body. When our chakras are clear, positive energy is able to move through them easily, and a natural balance is created within our bodies. The chakras begin at the bottom of the spine - the “root” - and work up from there, ending at the “crown,” or the top of the head.

To cleanse your chakras, imagine spinning wheels moving from the base of the root up to the crown, and being cleansed by water, or spinning quickly so that any clogs are cleared. It can be helpful to visualize the water moving across each wheel and then flowing out through your body and onto the ground.

In contrast, for a manifestation visualization, imagine each chakra spinning and letting out light all around your body. End that visualization by imagining a magnet spinning above the crown of your head and calling in all that you’re manifesting for the cycle.

Fire is a key part of any moon ritual, as one of the four elements. You can also use it with other practices if you so choose. For example, if you want your manifestation to feel even more powerful, using fire as you manifest each intention, to look into as you write down or speak your intentions, can be very powerful.

Rituals for the First Quarter

First quarter rituals are all about checking in on your intentions and any progress they have made, and determining what still needs to be done. This is also where you will want to create action. You will need to use your sacred moon water in this ritual. Take 2 glasses, and pour the sacred water back and forth until it feels even and balanced between each glass. You will then place the glasses of water on your altar, and the ritual is complete. During this time, it is also good to practice affirmations, meditations, and magic journaling (which is the practice of paying attention to all the progress you’ve made and what you have noticed since you set your intentions). These actions are key during this time to make sure your intentions and manifestations are retaining and growing their power.

Moon rituals are a fun and engaging way to increase awareness of both the natural moon cycles already at play, and your own spirituality. For all rituals, it is important to only practice what feels right and productive for you. There is no concrete, correct way to practice moon rituals, so have fun with it and do what makes you feel connected to the power and nature of the moon.