How to Interpret the Death tarot card in any reading 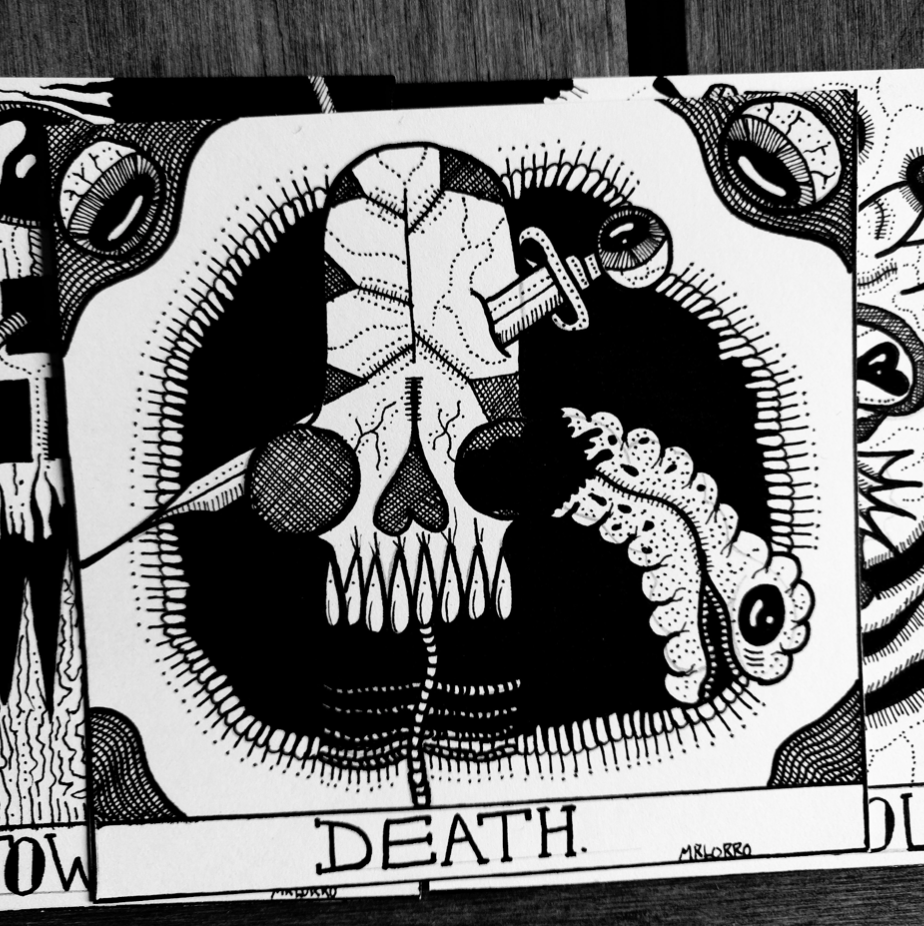 No, you’re not going to die if you draw the Death card. We promise. That’s just the media hyping this much-maligned tarot card so they can make a quick buck or two off of jump scares and cheaply-produced horror movies. Don’t buy into it. The Death card is much more spiritual in nature, and while it’s still a bit scary, that’s only because all change is scary.

Let’s back up and take a good hard look at Death:

Let’s get out the shovels and dig deep into Death.

So as we’ve already stated, Death cards rarely-- practically never-- predict actual physical death. Don’t let this small caveat convince you that turning over Death in a reading means that you could die. We don’t want to say never-ever, but any good tarot reader knows that the ethics of predicting things like the outcomes of illness, pregnancies, and such is just not done.

What it does predict or indicate is that major, life-changing transformation is at hand. Death isn’t literal-- it’s metaphorical. The old you-- or the old version of your relationship/career path/vision of your life-- is “dying” and a new one is being forged. Depending upon its position in the reading, it would mean that this forging process is coming, current in progress, or on the verge of happening.

Key things to remember with Death is that it's a process, with components like accepting and acknowledging that change is necessary, making that change actionable or accepting it if out of our control, letting go of the old, and building the new. It may be painful, it will definitely shake you and your life up more than a first-time pilot hitting turbulence in a small airplane, and you will be different on the other side. You will learn new lessons.

The way in which you navigate this change is key to your success. If you don’t step up and handle it with grace and courage, you will keep repeating the same lessons and be miserable-- perhaps even develop some toxicity. Keep your chin up, eyes on the prize, and remember that change can happen to you or for you. If you cannot see the outcome-- maybe there are elements that cloud it-- do not let that create fear that controls you. Instead, take a deep breath and dive in, plow through, and hold steady in your faith that you’re learning important lessons.

History of the Death card and some art appreciation

If you haven’t read our Brief History of Tarot, it’s worth reading to gain a fuller appreciation of tarot’s uses and development. Because you see, it’s especially important to remember tarot’s origins when considering the Death card. Tarot started out as a sort of religious game for the social elite called Trumps that was similar to Bridge. There were four suits of pip cards numbered 1-10, a set of court cards for each suit, and special “trump” cards which were specially commissioned to represent specific allegorical moments of religious importance. Trumps originally included Death, The Pope, the Angel, and The Fool. The pip cards eventually became the minor arcana, the Court cards remain, and the trump cards became the basis for the major arcana.

Death is typically the 13th tarot card in the major arcana. Numerology tells us that 13 is significant of major change and transformation. When A. E. Waite and Pamela Smith collaborated on the Rider-Waite-Smith deck (sometimes shortened to Rider-Waite or RWS), they were very aware of and particular with the numbers associated with each of the major arcana.

Death’s poor public image is not helped by its classic artwork. Pamela Smith based her Death design upon centuries of other cards, and depicted Death as a skeleton. She emphasized the biblical connotations of death by perching Death on a white horse, as in the four horsemen of the apocalypse. All walks of life-- rich man, religious man, even children and women-- fall before him. In the distance, the sun sets or rises between two pillars.

The whiteness of the horse and the flower on Death’s standard symbolize purity-- all are purified and made new through the process of dying or “dying.” The fact that we cannot tell if the sun is rising or setting symbolizes that the end is the beginning. The two pillars are the duality of life/death. The skeleton indicates mortality, both in the sense of very real death-- which, during the times of tarot’s origin was very much in people’s faces with the very act of eating could end you if food wasn’t properly cooked -- and in the sense of it is human to transform and change. The skeleton will turn to dust, and from dust will grow new life.

So while the Death card suffers from a bad PR image, it’s actually one of the best cards to receive in a reading. Nothing can stay the same-- stagnation is toxic, growth must happen-- so when Death appears, take a deep breath and remember that it’s not literal.

Here are some questions to help you dig deeper into developing a relationship with the Death card. This process will help you to connect better with the Death card(s) from your particular deck(s), which will create easier and more accurate interpretations in your readings.

Here’s how it works…

Okay, so let’s combine our knowledge of the meaning, message, and symbolism of Death into a practice reading. Let’s keep this to a three-card reading, and let’s say that you’re having a tough time with life lately. Everything just seems to be going wrong, or hard to handle, and you’re seeing lots of conflicts popping up and just not feeling the same passions anymore. You decide to sling some cards and find out what’s going on.

So you cleanse your deck, shuffle with intention, and pull the Four of Swords, Death, and the Three of Pentacles.

The Four of Swords is a card that orders you to rest. You’re burnt out, exhausted even, after labors and tired of the same-old. You’ve done a lot of work. Now it’s time to rest, and be at peace, and to nourish your body and soul.

The fact that this is followed directly by the card Death-- the card of intense transformation and reconstruction of the self-- combined with the troubles you’ve been having sort of all over the map of your life, really point at a need to rest because you’ll need to shore up your energy reserves for a huge change.

And the change is necessary. Without it, stagnation sinks in and toxic complacency settles in. Change is scary, and the level of change that the Death card indicates is often painful, because when this type of transformation is necessary, it’s often when stagnation is already taking over. Drastic change is necessary before you choke on your own unrealized future.

The Three of Pentacles is the last card in the reading. Pentacles are “health and wealth” types of cards dealing with the physical or material world. This particular Pentacles (“Pents” is the slang term) card indicates that skill and artistic ability have been achieved through hard work. It’s a card that signals creativity that is not just inspired but actualized.

So if you put all of the cards together, the message is that you’ve gotten yourself in a rut. Rest up, put in some good self-care and unplug from the digital world. Sleep in for a day or two, take a good long soak in the tub with some nice scented CBD salts or a bath bomb, and put your feet up. Big, daring, bold, scary-- possibly difficult and tearful-- change is at hand, but once you’re through it, you’ll experience a period of actualizing dreams and manifesting an inspired space for yourself in which to exist. You’ll make great things happen for yourself. Always remember that you are your greatest project! You’re worth it!

So now that you understand the Death major arcana tarot card a little better, perhaps you won’t be so scared of it. Dig a little deeper into your relationship with this card-- it’s definitely worth it.