Unlock your Third Eye chakra’s potential with these 8 crystals. 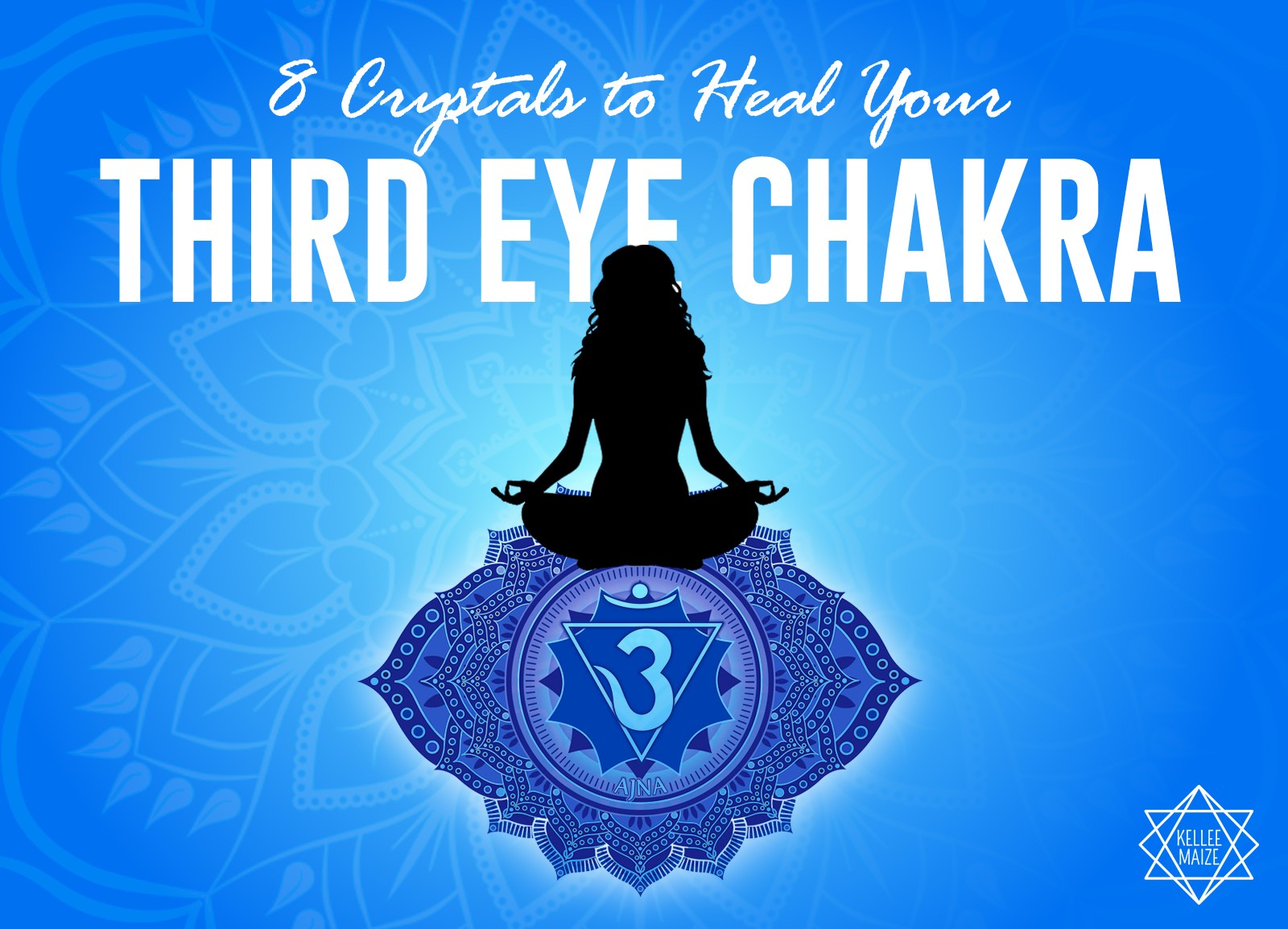 Even though we often treat them separately in our daily lives, the physical, spiritual, and emotional aspects of our being are all intricately connected. But perhaps this apparent inability to recognize the interconnectedness of ourselves and of the world around is linked to a blockage in the sixth chakra: the Third Eye.

In this article, we will explore…

What is the Third Eye Chakra?

The Third Eye Chakra, and What It Means for You

Though “Third Eye” is the most popular name, the sixth chakra is known by a number of other titles: the inner eye; the brow chakra; the mind chakra; the guru chakra; “Ajna,” in Sanskrit, which roughly translates to “command” or “perceiving”; even the “ocean of nectar” in Eastern studies. This powerful visionary center governs our mental and psychological states, and our ability to clearly perceive the world around us.

The Third Eye chakra is a vital chakra to pay attention to in both intellectual and creative matters. After all, it is connected directly to the brain and central nervous system, as well as to the pituitary and pineal glands, and can thus affect everything from how easily we wake up in the morning to how well we can form cogent thoughts. As always, a mixture of yoga, meditation, mindfulness, and general mental health upkeep are important to keeping this chakra balanced.

Although the “third eye” is generally depicted as being in the middle of the forehead, this is a few inches off. The Third Eye chakra is located in the center of the brow, right above the bridge of the nose and between the eyes. Its energy flows clockwise throughout the head and out the back of the skull.

Blockage or Imbalance in the Third Eye Chakra

A blocked Third Eye chakra causes a distinct lack of clarity for the bigger picture in life, and an inability to properly focus on our goals and actions. This leads to a deep weariness that translates itself into every nook and cranny of our lives.

Mental symptoms of a blockage may include:

Due to the Third Eye’s intense connection with the brain, it is no wonder that this blockage can also lead to various physical issues.

Physical symptoms of a blockage may include:

With these mental and physical stressors, it can seem impossible to regain control and clarity. But there are ways to improve psychological balance through the help of crystals. What follows is a list of eight such crystals and stones that may help you heal your Third Eye chakra.

Sodalite is a blue or blue-violet stone beautifully decorated with earthy tones. It is an ideal stone for focus, balance, and mental clarity. Use sodalite during meditation to ease the frustration and fear that comes with a blocked Third Eye chakra, or keep it on your desk when writing or attending meetings to encourage a calm and creative head space.

Tip: Use your hands a lot pursuing your creative goals? Try wearing sodalite on a ring! The Third Eye chakra is located between the eyes, but a good balance of energy should run through the entire body.

The Stone of Friendship, Truth, and Total Awareness

Though similar in appearance to sodalite, lapis lazuli is known for its intensely rich deep blue coloration. Lapis lazuli encourages clear communication and psychic order, so it is no wonder that it is known as the Stone of Friendship. It also connects the user to the dream state, leading to awareness of the self and of the world as a whole. This makes it perfect for the big picture outlook associated with the Third Eye chakra.

Tip: People have been making amulets out of lapis lazuli since Ancient Egypt! Wear lapis lazuli on a necklace to keep it close to your head.

The Stone of Heaven

If the earth at its most beautiful was a gemstone, it would look like azurite. But the Stone of Heaven has energy much more spiritual than simply earthen. Azurite is praised as being an ideal stone for psychic developments, divine guidance, and deeper intuition. If your Third Eye chakra is blocked, meditating with azurite is one of the best ways to open your mind to balance, productivity, and spiritual awareness.

The Stone of Support

Dumortierite is a rare mineral that comes in shades of dusky blue and violet. A Third Eye chakra in need of healing brings with it a lack of accomplishments, a negative attitude, and a deep mental discomfort. Dumortierite soothes these effects, promoting courage, positivity, and harmony. It is also associated with self discipline and organization, making it an ideal stone to use if you feel disconnected from your goals.

Tip: Dumortierite eases panic and fear, and is silky smooth when tumbled. Use it as a worry stone!

Labradorite is a stunningly beautiful, iridescent blue stone woven through with the colors of a nebula. Is it the ideal stone for warding off negative energies, such as the negative outlooks and mentalities associated with a blocked Third Eye chakra. The 6th chakra is one that can be blocked from both the front and the back; a block in the front leads to an inability to take action, while a block in the back leads to action without thought. Labradorite opens up the Third Eye chakra while almost protecting it from all sides from negative forces.

Tip: Labradorite is often carved into the shape of a heart, which can strengthen its energy.

Stone of Exploration and the Muses, The Violet Stone

Iolite is the deep indigo blue and violet variation of cordierite. Iolite is the perfect gemstone to balance various aspects of yourself, whether that be the male and female sides of your character, your creative and practical inclinations, or your physical and spiritual activities. It has a gentle energy that raises consciousness and balances the chakras with one another, primarily the Third Eye and Crows chakras. It is also favored by Shamans for its association with clairvoyance and astral travel.

Tip: Iolite improves creativity! If you find yourself in a creative rut, try keeping a piece of iolite in your energy field.

Amethyst is a semi-translucent quartz famous for its purple coloration. Meditating with amethyst has a variety of benefits. It can create a doorway between the Crown and Third Eye chakras, allowing the energy of the Universe to flow through the chakras and renew the spirit. It is also associated with memory formation; sleep quality; focus and self reflection; and emotional, mental, and spiritual balance, all of which unblocks the Third Eye chakra.

Tip: Amethyst is common in jewelry. Wear it on a necklace or a headband to keep in close to the Third Eye chakra.

Stone of Discernment and Aptitude

Fluorite is a pastel gemstone that comes in a wide variety of blues, greens, and purples. Different variations of fluorite have unique benefits in meditation. Blue fluorite helps with spiritual awakening, and green fluorite enhances intuition. But it is purple fluorite that is most beneficial for stimulating and unblocking the Third Eye chakra. Fluorite opens the mind and removes distraction and creative blocks, allowing the Third Eye chakra to heal and focus.

Tip: You can find fluorite in a variety of shapes ideal for meditation and daily use.

Healing the mind can seem like an impossible task. But it is important to remember that a creative or mental block is just that: a block in the road. And a block doesn’t mean we stop indefinitely. It only means a setback until we can find the right tools to move on and heal. Crystals are a valuable resource for healing the Third Eye chakra and regaining a sense of balance, focus, and motivation in your life.

Don’t let a blocked Third Eye chakra hold you back. Heal, have faith, and get back on track to following your dreams.

Businesses that Prioritize Sustainability
The climate crisis is shedding light on more eco-friendly businesses
Read More >>
The Best Zodiac Meme Accounts on Instagram
15 relatable accounts that will help you get to know your zodiac sign a little better.
Read More >>
3 Companies That Went Plastic Neutral
Did you know that 300 million tons of plastic gets created yearly? Even more frightening, 50% of that plastic is single-use only. In the past ten years alone, we have made more plastic than we have in the last century.
Read More >>
Top 6 Sun-Conscious Places to Vacation During Winter Months
With the winter months approaching, the nights getting longer and days getting shorter are sure to bring on our winter blues.
Read More >>
10 Inspiring Yogis to Follow on Instagram
These 10 Instagram yogis and their aesthetically pleasing feeds will have you ready to roll out the mat and get moving.
Read More >>
Garnier Committs to Sustainable Green Beauty
A journey to cleaner, greener beauty that will help all of us feel a little more beautiful.
Read More >>
Top 5 Environmental Issues in Western PA Today
These issues are prevalent, but something can be done to improve them for the better.
Read More >>
The Best Clean Sunscreen Brands
Sunscreen is important for skin protection, but some brands can be toxic.
Read More >>
The Effect Of Iron In Water And How To Remove It?
But what exactly is the effect of iron in water? Iron makes water stink and have a metallic taste. In high levels, iron changes the color of the water to red, yellow, or brown.
Read More >>
How much of a difference does an electric car make?
Are electric cars really so great for the environment or are they overhyped?
Read More >>
Self Care Ideas for Moms
Being a great mother is an awesome thing, but don’t forget to also take care of yourself!
Read More >>
The Best Tarot Decks You Can Get on Amazon Right Now
Make sure you get yourself one of the best decks available.
Read More >>
Are Vegetarians Healthier than Meat Eaters?
There is a good chance that eating a plant-based diet is naturally a lot healthier than a diet that includes meat products.
Read More >>
Why do People go Vegetarian or Vegan?
Vegetarian and vegan diets grow in popularity every year, and there are very good reasons why.
Read More >>
10 superfoods for your breakfast smoothies to kickstart your day
Read More >>
Sustainable Seafood Brands
Finding sustainable seafood is possible.
Read More >>
What is Reiki?
This healing technique is not very well known, but worth getting to know better!
Read More >>
5 Vegetarian Lunch Ideas
Being a vegetarian doesn’t mean you have to miss out on the good stuff when it comes to delicious lunches.
Read More >>
When Should I See A Chiropractor?
Seeing a chiropractor doesn’t always mean you have to be experiencing pain-- visiting a chiropractor could bring you overall wellness.
Read More >>
Vegetarian Breakfast Ideas
Breakfast is an important meal. Make sure you have fun with it!
Read More >>