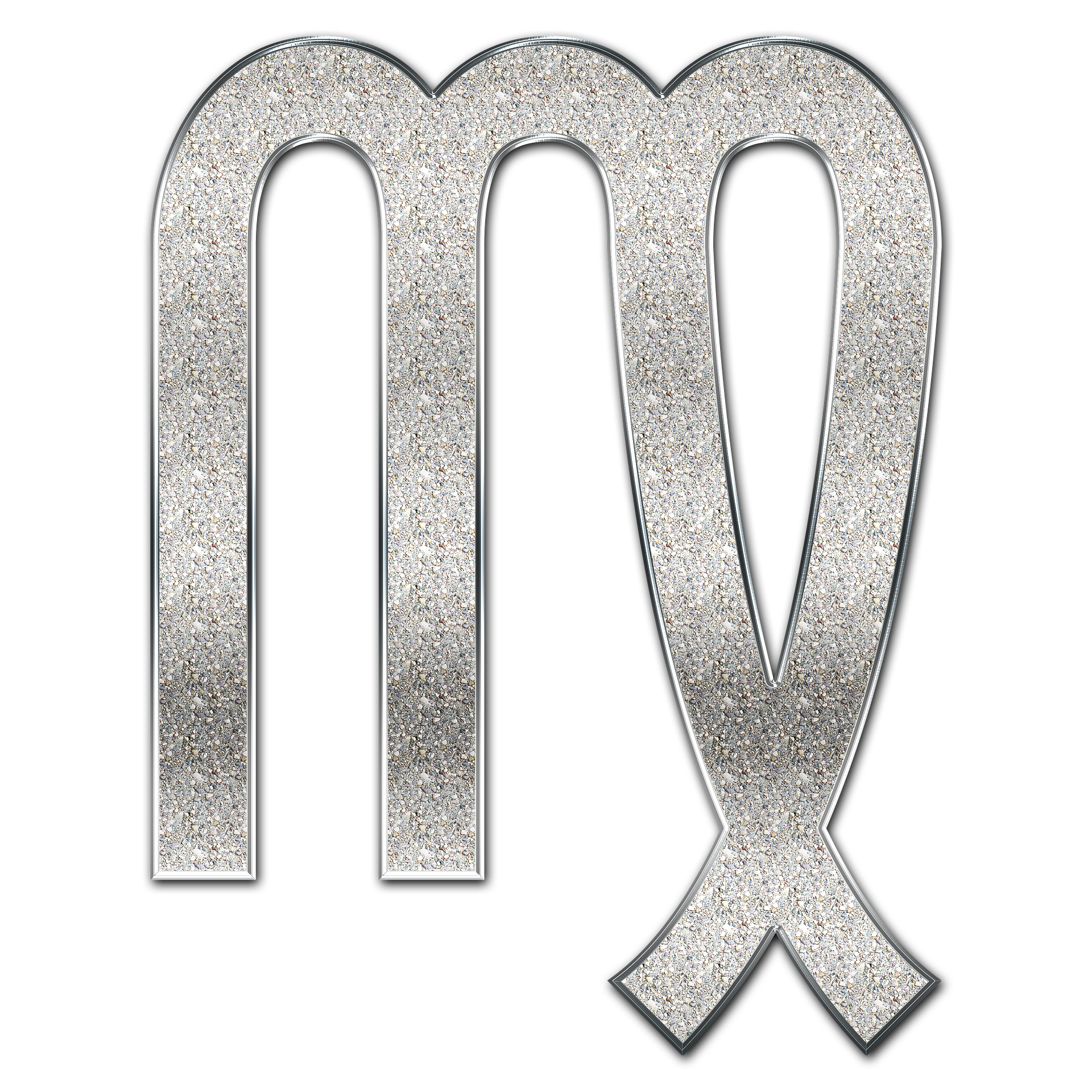 Astrological signs are made up of the twelve 30° sectors of the ecliptic -- or the plane of Earth’s orbit around the sun. They each have their own section in the natal chart or horoscope -- a 360° circle divided into twelve equal parts, one for each sign. Each sign was named after the constellation present during its passage through its sector. The zodiac begins with Aries, starting at the vernal equinox or March equinox and ends with Pisces. The concept of the zodiac dates back to the Babylonian era in the second millennium BC and was later influenced by Greek Hellenistic society. Today, Western astrology builds upon the concepts set by Babylonian and Hellenistic cultures.

This section will focus on Virgo, the sixth zodiac sign that occurs between August 22nd and September 21st. It is found between the 150-180° mark, its ruling element is earth and its mode is mutable. Its symbol is the maiden or virgin because the constellation Virgo has been associated with gains and harvest both in Babylonian and Hellenistic astrology. In Greek mythology, Virgo was connected to Demeter, who was the goddess of harvest, grains, fertility of the earth, cycles of life and death and sacred law. Virgo’s ruling planet is Mercury and its manta is “I analyze.”

We will explore these topics more in depth in different sections:

A Perfectionist At Heart

Each sign is ruled by one of the four classical elements -- fire, water, earth, and air. Virgo is ruled by earth. Earth and water have negative polarity, while fire and air are positive. Negative signs are associated with feminine energy and are considered to be self-containing, while positive signs are associated with masculine energy and are considered to be self-expressive.

Earth signs are seen as grounded, they are intellectual and bring others back down to earth, while reminding them to start out with a solid foundation. They are considered “builders” and are focused, career-driven, practical and often enjoy helping others. Like the structure and functions of the earth, Virgos tend to be efficient, skilled, and resourceful.

Virgo is often considered to be the “Perfectionist Sign,” this is because they will often sacrifice their own interests to focus on more important things. They know the value of hard work and will often make every attempt to achieve straight A’s in school and excel in the workplace. They are analytical, precise, and systematic. But because they strive to be the best and achieve high standards -- they are seen as perfectionists and can often be critical of others and themselves due to their desire to never fall short of a goal.

As we have said, each sign is associated with one of the four elements -- three signs per element. The signs then fall into a further category of modality -- each sign can either be cardinal, fixed or mutable. Virgo’s fall into the mutable category. Mutable signs are known for their adaptability, flexibility and resourcefulness. Virgos are naturally born to adapt to change -- they enter the world during a seasonal change when the summer heat of August begins its transition to the cooler autumn temperatures brought by late September.

As a mutable sign, they know how to ride the wave and go with the flow. They would rather adapt themselves to conform to the norms of society -- if they believe it is for the betterment of society as a whole. They are somewhat of a chameleon -- extremely versatile individuals who find it very easy to change. However, since they do not mind changing in order to please people, sometimes this can be a negative since people may view them as insincere, fake or inconsistent.

Their resourcefulness makes problem solving one of their greatest skills. They are diplomatic, sympathetic and will easily interpret the details of any situation while determining the essential aspects they need to work on. This leads them to be well-liked by others -- but as mentioned before, their willingness to change in order to have a better outward perception can sometimes land them in hot water.

The Kings and Queens of Communication

In Greek mythology, Hermes, the winged messenger god was associated with Mercury. Hermes was easily adaptable and used his available resources to the best of his ability. The planet itself is associated with communication and intellect -- or processes occurring within the mind. Signs that are ruled by Mercury primarily use intellect rather than instinct to make decisions. They visualize a problem with an object, interpret it, take it apart and rebuild to function better than it did in its original state.

Virgos are always analyzing their surroundings -- they are constantly forming opinions and judgements on these situations. They never miss a detail. Because Mercury is also associated with intellect, Virgos are always processing information and examining how it flows. They are focused on service -- service of others, in which they utilize their ability to communicate, listen, and problem-solve.

Mercury symbolizes easiness, a go with the flow attitude, new beginnings and change. All of these characteristics directly influence the relaxed nature and adaptability of Virgos. They are deeply in touch with themselves, their intellect and use their resourcefulness and communicative skills to advance in life.

We’ve covered the flexibility, adaptability, intellect, and resourcefulness of Virgos -- but what are their other personality traits? Some common keywords that describe Virgos are:

Virgos are often inherently shy, but because of their adaptability -- their environment determines how they will act. If the environment makes them feel uncomfortable they will be shy, but other times they will be sociable and outgoing. They enjoy privacy and thrive when they are alone -- they take me-time to another level. They are probably the most self-sufficient sign because of their strong willed nature. They are always thinking about what they have to do next.

Even though their perfectionist nature may lead them to be overly critical of others, they do try to see the good in everyone. They are kind hearted, humble and affectionate. As we mentioned before, they will always try to help out and they do try to be patient with people.

When they are not hard at work trying to advance their career or check goals off their list -- they are getting in touch with their creative side. They use creativity as an outlet and enjoy mediums such as dance, fine arts, or writing.

Since Virgos are concerned with being the best in the workplace, being the best in appearance is another of their biggest concerns. They are often fashionistas and spend time carefully choosing an outfit -- they like outfits that match! They like to beautify themselves since they are naturally elegant and chic. In others they value and appreciate a beautiful appearance.

They enjoy organizing for fun -- yes, you read that right, they will organize anything and everything just because! Since they are very analytical they enjoy when objects have a particular place. They will organize and then re-organize their clothing drawers, kitchen equipment and stacks of movies.

If you’ve ever met a Virgo, you know they have an innate passion for volunteering. This comes from their desire for service and need to help people for the greater good. Even when they are slammed at work, they will find time to volunteer and give back.

Because Virgos are very intellectual and think in terms of straightforward logic and facts -- they can be very sarcastic. Since they are always thinking and observing they will use sarcasm to bring humor to things that they and others do. They enjoy situational humor in a conversation -- however, it is not meant to be taken as rude or insensitive.

If you’ve always wanted to know more about the earth sign Virgo, hopefully this section has given you some insights into their common characteristics and personality traits. They are strong, intelligent, adaptable and hardworking signs that are always willing to lend a helping hand.

If you enjoyed reading about astrology and the zodiac signs in general, I encourage you to keep reading and learning about the other signs. While astrology is not deemed a real science, many of the traits and characteristics of each sign accurately describe the people who were born during their appearance in earth’s orbit. This can be a really fun way of learning more about yourself and your friends -- you can even go as far as to look into sign compatibility to determine who you should get to know better!