The Most Noble of Kings: The King of Cups 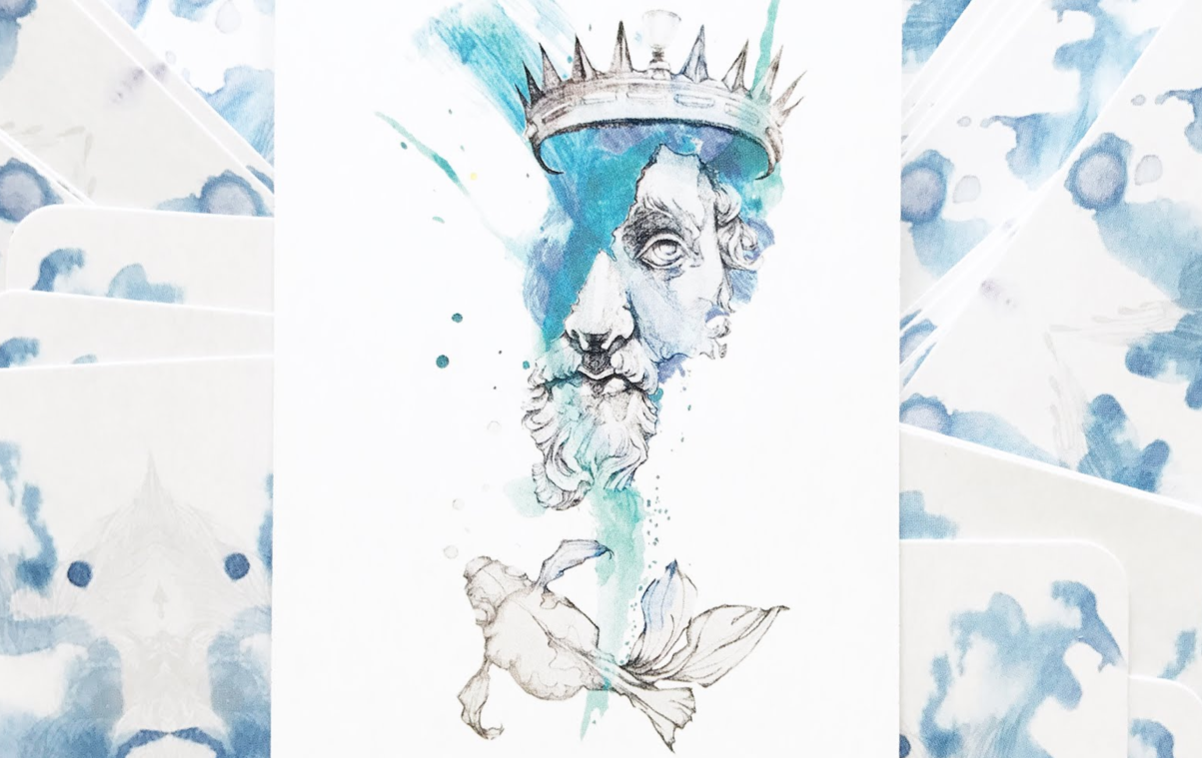 Image courtesy of The Curious Cardslinger.

Sometimes termed the most noble of all the Kings in the tarot court cards, the King of Cups rules over the element of water, the role of emotions in a situation or reading, and related to water astrological signs. Taking the time to explore and understand this lovely court card is well worth your time.

In this article, we’ll discuss:

A note on gender terms: traditionally, the King of Cups is referred to as a male and uses the pronouns “he/him.” We will make an effort to be inclusive in this article, and will try to stick to using “they/them” as pronouns. We’ll explore more about the “masculinity” of the King of Cups and the idea of “his” gender in the next section.

The meaning and message behind the King of Cups

As with all tarot cards, you will need to decide if you’re going to read reversals. In this section, we’ll cover both upright and reversed versions of the King of Cups in an effort to be thorough. One of the nice things that differentiates court cards like the King of Cups from minor arcana is that they are very specific.

The King of Cups card in the upright position can often indicate a person-- it’s generally accepted that in most cases, court cards represent people, but they do not always-- with emotional stability and intelligence. This person is kind, affectionate, diplomatic, and often in a leadership or counseling role in your life. Traditionally, this King is referred to as an older male with fair hair. Modern interpretations reject this, and instead opt to see this King as an older person of any or no gender identity who occupies an emotionally balanced, wise, tender, and consistent role in your life. They may tend to the more masculine side with their energy, but not necessarily in any other way.

When the King of Cups is reversed, there is a severe lack of emotional maturity and an overall oversensitivity or pettiness. This person may be manipulative, toxic, or simply have lost control over their emotions and is going through a period of deep depression, anxiety, or even complete detachment. This is a message that this person is either lost to out-of-control emotions, or has no emotions at all. There may also be an absence of sexual connection/interest, confusion over sexuality, or even a toxic or dangerous sexual behavior trying to mask a deeper problem. Either way, if you read reversals, the King of Cups reversed is a huge red flag.

Keywords for Reversed: a person who is emotionally unstable, manipulative, petty, emotionally immature, depressed, cold, rude, a cheater, even violent or controlling

Building a knowledge base and relationship with the King of Cups

It’s worth it to take the time to build a relationship and knowledge base about each of your tarot cards. You don’t have to do it all at once-- you can take it reading by reading, spending time to make sure you understand all of the subtle ways the cards connect. Or you can do it intuitively and pick a card a week. There are lots of ways to navigate doing this, and you have to pick one that fits your lifestyle and learning style. We’ve provided lots of suggestions below about the King of Cups.

Note: We’ll use the specific term “he/him” here as this is specifically about traditional RWS artwork and not modern interpretations of who the King of Cups is. We mean no offense or gender bias of our own.

Traditional and familiar Rider-Waite-Smith deck artwork depicts the King of Cups as a bearded man on a throne in the middle of the sea, holding a long narrow-mouthed cup in his right hand and looking off to his left (his right and left, not ours-- theatre folks would say “stage right” and “stage left”). His colors are very cool-toned blue and green, with a touch of red. His crown and short scepter are golden. When we pick this image apart for symbolism, the King’s beard indicates that he is older and therefore considered wiser. His gaze away from the long cup indicates that he does not need to look to know what lies within-- he has emotional intelligence and knows the depths of his emotions and how to rule them.

The sea around him symbolizes the emotions that he has mastered in the upright position-- and that will overwhelm him in the reversed position. Water is traditionally a feminine element-- the element which brings life-- but this simply means that all members of this court are perfectly balanced in masculine and feminine energies. The colors blue and green are water colors-- blue being a particularly powerful color usually reserved for royalty or sometimes priests. The touches of red and the gold of his cup, scepter, and crown also symbolizes royalty, and the red paired as an accent rather than a primary focus color indicates that while the passions are there, they are ruled and tamed by experience and balance.

Keep notes like this in your tarot journal. Writing them down will help you remember them, and it means you won’t have to search the internet-- just flip to the right page and you’re done. You also want to keep a section for exploring this card further. We’ve got a list of questions below to help guide your research into this card, and help you build and explore a relationship with the elements of this card:

Practice reading with the King of Cups

Now that you’ve become as familiar with the King of Cups as an old friend, it’s time to practice reading with it. We’re going to try a different way than we’ve explored before. This time, we’re going to practice building a few card combinations, and then see how they’d fit into some scenarios.

First, you know the King of Cups. That person who is dependable, affectionate, in touch with their feelings, and wise. But let’s add another card-- let’s add a major arcana card. How about The Magician? The Magician is that archetypal moment when you have all of the tools you need, plus the resources and skills to use them. In what ways does The Magician interact with the King of Cups? How does this change when one or both of them is reversed?

Let’s add a third card. We’ll make this one a minor arcana card-- we’ll choose the Ace of Wands. The Ace of Wands means a new creative endeavor or journey. Look at how all three cards interact. Are there similarities in the artwork? Symbols that they have in common? How do the Wands interact with the Cups?

Now that you’ve explored the relationships the cards have with each other. Let’s put them in a few scenarios and spreads.

If we put these cards in a love scenario with a past-present-future spread, we’d interpret this as follows (assume all upright):

How would any of these interpretations change if any of the cards were reversed?

Change up the scenario and spread to a career focus:

Leave your interpretations in the comments below!

We hope that you check out and comment on our other articles in this series, and be sure to check out our features on new and diverse tarot decks, too!

The Best Tarot Decks You Can Get on Amazon Right Now
Make sure you get yourself one of the best decks available.
Read More >>
Are Vegetarians Healthier than Meat Eaters?
There is a good chance that eating a plant-based diet is naturally a lot healthier than a diet that includes meat products.
Read More >>
Why do People go Vegetarian or Vegan?
Vegetarian and vegan diets grow in popularity every year, and there are very good reasons why.
Read More >>
10 superfoods for your breakfast smoothies to kickstart your day
Read More >>
Sustainable Seafood Brands
Finding sustainable seafood is possible.
Read More >>
What is Reiki?
This healing technique is not very well known, but worth getting to know better!
Read More >>
5 Vegetarian Lunch Ideas
Being a vegetarian doesn’t mean you have to miss out on the good stuff when it comes to delicious lunches.
Read More >>
When Should I See A Chiropractor?
Seeing a chiropractor doesn’t always mean you have to be experiencing pain-- visiting a chiropractor could bring you overall wellness.
Read More >>
Vegetarian Breakfast Ideas
Breakfast is an important meal. Make sure you have fun with it!
Read More >>
Sustainable Coffee and Tea Brands
Never worry again about where your favorite drink is coming from when you know about these practices and brands.
Read More >>
The Latest on Pittsburgh’s Plastic Bag Ban -- What You Need to Know
Pittsburgh city council members have been moving to ban the use of single-use plastic bags in the city.
Read More >>
Undoing Trump’s Damage: Government Initiatives to Support the Environment Launched in 2021
We Can Make Progress Again
Read More >>
How to tell if your Tarot Reader is Legit
How to distinguish the real from the fake.
Read More >>
The Top Teas for a Variety of Different Moods
Try these brewed teas to satisfy whatever mood you’re feeling.
Read More >>
Here Are the Best Gifts for the Creative Pisces in Your Life
This is the ultimate gift guide for something that really speaks to their smart and creative personalities!
Read More >>
Here Are The Best Zodiac Inspired Gifts For Your Favorite Aquarius!
Your Aquarius friend is a spontaneous, independent, and free-spirited person. Give them a gift that’s as exciting as they are!
Read More >>
Here Are the Best Gifts for the Hard-Working Capricorn in Your Life
These picks are perfect for any occasion in your favorite Capricorn’s life!
Read More >>
Everything You Need to Know About the Fight Against Fracking in Western PA
Fracking is the driving force behind the oil and gas industry, but it comes at a heavy price for the environment. Here’s the rundown of what you need to know.
Read More >>
Need a Gift for a Loyal Libra in Your Life? Look No Further Than These Zodiac Inspired Options
This Libra season, get your loved one something that speaks to their egalitarian star sign
Read More >>
Here are the Best Zodiac Inspired Gifts for Your Favorite Sagittarius!
A gift guide for the hilarious, loyal, spontaneous Sagittarius in your life!
Read More >>