How to interpret The Star tarot card in any reading 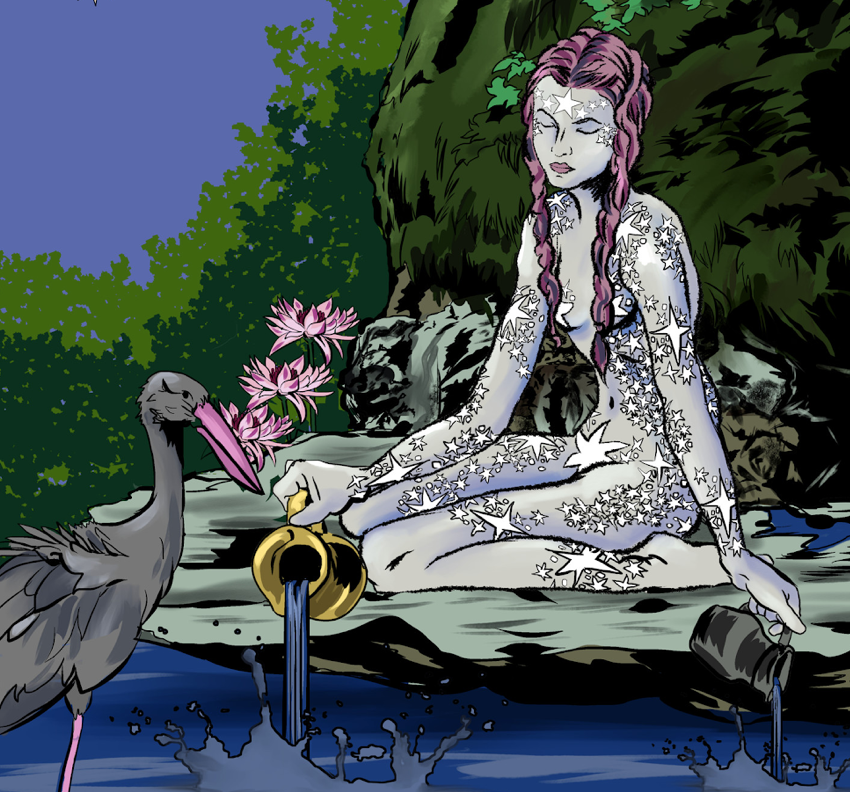 We’ve all experienced times that tried, crushed, and bruised our souls. Our hearts have all been broken by something, or someone. We’ve all known despair.

The Star tarot card comes to us in these times to remind us of who we are, and have faith. It is, perhaps, the most comforting and encouraging cards in the entire tarot deck. Let’s take a closer look at it:

The Star’s message and meaning

The Star comes right after The Tower in the major arcana, and it’s not a coincidence. The Tower is one of the most feared-- and misunderstood-- tarot cards. It often inspires as much fear as The Death card’s undeserved reputation in the media. The Tower is a moment where everything falls apart in a spectacularly traumatic way. But then there’s the star…

The Star reminds us that no matter how dark it is, or may seem, hope and light are always with you. In fact, they’re inside of you, guiding you through everything. There’s a meme on social media that sums up The Star fairly well: “What does it take for a star to shine? A f*ckton of darkness.”

The Star is, in one keyword, hope. But not just that simple idea of what stayed with Pandora after her famous unboxing-- this kind of hope is a renewal of spirit, a reassurance that, although the way forward is murky and frightening and the naysayers are loud… you are on the right path, doing the right things, and in navigating to the right place. The light guiding you forward may be faint, but it is there, so take comfort and keep going.

The Star reminds you that you are blessed, and that you already have all of the tools and knowledge that you need. You only must have courage to keep going. That’s a special kind of bravery, but you will not fail. The Star card may even bring a sense of calm assurance, healing of past trauma, and better balanced energy.

The ultimate message of The Star is to have faith, steady the course, and keep hope. It’s kind of like Dory from Finding Nemo: “Just keep swimming.”

Artwork and symbolism in The Star card

The artwork and symbolism of The Star have their basis in numerology, mythology, and astrology.

Numerologically, The Star is the 17th major arcana card, and 1+7=8, which is the number of strength-- literally, too, The Strength card is the eighth card-- and harmony. It symbolizes infinity and absolute balance. All is as it should be.

This is demonstrated by the eight stars that appear in the traditional Rider-Waite-Smith tarot deck art. Traditionally, The Star is a picture of a naked woman, standing with one foot in water and the other on land. She is pouring water out of two jugs-- one on land, the other into the water-- with the aforementioned eight stars above her head.

Mythologically speaking, nakedness in artwork is a symbol of both purity and authenticity. The Star does not need any clothing or jewelry for protection or decoration. Her power comes from this deeply rooted sense of who she is, no matter how many evolutions that may involve. With every iteration of herself, she is more truly herself.

The depiction of her feet straddling water and earth at the same time symbolizes balance in all things-- conscious/unconscious, light/dark, and so on. A more modern way to think about this is that she has a healthy sense of boundaries, never giving more to one element than the other-- she never pours from an empty cup.

The eight stars symbolize her connection to the divine, and how she is in balance between spirit and physical realms as well. They are also points of light, which symbolize hope. If we recall that 8 is also a sideways infinity symbol, we have a picture of eternal hope in the eight stars. Eight is also an even number, which is another perfect balance.

Astrologically speaking, The Star is usually associated with Aquarius. Aquarius, believe it or not, is an air sign. The Star, though it has water imagery, is air as well, given where stars live. And in a stroke of the Universe knowing what it’s doing, it’s worth pointing out that stars are made of gasses, just like air. Air is the element of intelligence and the mind, and in the minor arcana, are represented by the Sword suit.

But the water element should not be ignored or unexplored. Water represents emotions, so the balance of water and air in The Star further underscores both the idea of “balance,” and also the need to listen to your intuition, which negotiates the space between emotions and intelligence. Your heart might be dragged down and your mind is saying “give up,” but your intuition is telling you to keep going. Listen to that voice.

Modern artwork for The Star tarot card takes many approaches, but certain elements from the original RWS artwork remains, such as the woman, the water, and at least one star. The Deviant Moon tarot deck has these elements, keeping seven of the original eight stars.

The Feng Shui deck depicts a woman dressed in blue and white-- the traditional colors of The Star, representing water and air as well as calm and hope or purity-- with a waterfall in the background. She carries a pitcher for gathering water, and a whole sky of stars shines above. There is one bright star in particular, and she wears an expression of almost sadness. She is looking away from the stars, which would offer her solace.

Even the Vampire Tarot reflects the traditional RWS elements. Instead of water, it’s blood, and the woman is standing in it. Blood to vampires is like water to humans, so the connection is still there-- it’s the thing that brings life. The vampire woman wears a star on her brow, on her third eye, which connects her to the divine and the stars shining above her head. She is not naked, but is barely clothed in black. She is looking at the blood trickling through her fingers as though the answers are there, but the star on her third eye connects her to the answers within.

Building or strengthening a relationship with The Star

The two best ways to connect with your tarot deck, and a particular card in it, is to study it in various ways. We’d recommend starting with mythology about the stars from around the world-- their creation stories and myths about particular constellations.

The story of Ganymedes the Cupbearer of Mount Olympus is related to the constellation and zodiac sign of Aquarius, so be sure to read that. But also read the Native American myth How Hummingbird Made the Stars, the story of Pandora’s Box (because it is the story of hope), and others. “The Star Dipper” is another fantastic story to read-- it’s inside Tasha Tudor’s Bedtime Book, along with other great stories. Tudor’s loving illustrations, and the folktale, both reflect the gentle hopefulness of The Star.

Another great way to explore The Star is through journaling. We’ve prepared some questions for you:

We hope that these questions help you to build a deeper understanding of The Star and its message. Let’s move on to a sample reading.

A sample reading with The Star

Sometimes in a reading The Star’s reference and message are absolutely clear. Other times, it doesn’t seem to have anything to do with anything, and you’re confused. Let’s take a closer look at a sample reading that, on the surface, seems just like that.

Let’s say that you’re in a bit of a slump or a rut, and you decide to pull some cards to get some advice on how to snap out of it. There’s nothing necessarily terrible going on, you just feel blah and bored with life, and need a little guidance on how to get your groove back. So you pick up your trusty tarot deck, give it a shuffle, and pull the Three of Cups, Six of Swords, and The Star.

First, let’s look at what each card means:

Upon initial reflection, The Star may seem out of place-- you’re not having a trauma from which you need to recover, you’re not hopeless, and “steadying the course” sounds a lot like the rut you’ve been stuck in for a while. But back up. Look at the other cards.

The Three of Cups is definitely an indication that some sort of shared experience needs to happen, as symbolized by the traditional three women dancing together in the artwork. This is a very clear nudge to get folks together in some way, shape, or form. This is emphasized by the Six of Swords-- perhaps you need to get away to visit them, or vice versa, or even meet them somewhere that’s not home for either of you.

Either the way, The Star emphasizes that getting together with them is the right thing to do-- you’re returning to a source of healing and reviving energy by connecting with those who do things with you. You’re stuck in a rut because of an imbalance-- a lack of joy-- and putting the joy back into your life with those in whom you find it will balance your life again.

Go ahead and wish on that star. It’s about to come true.