How to interpret The Hermit in any tarot reading 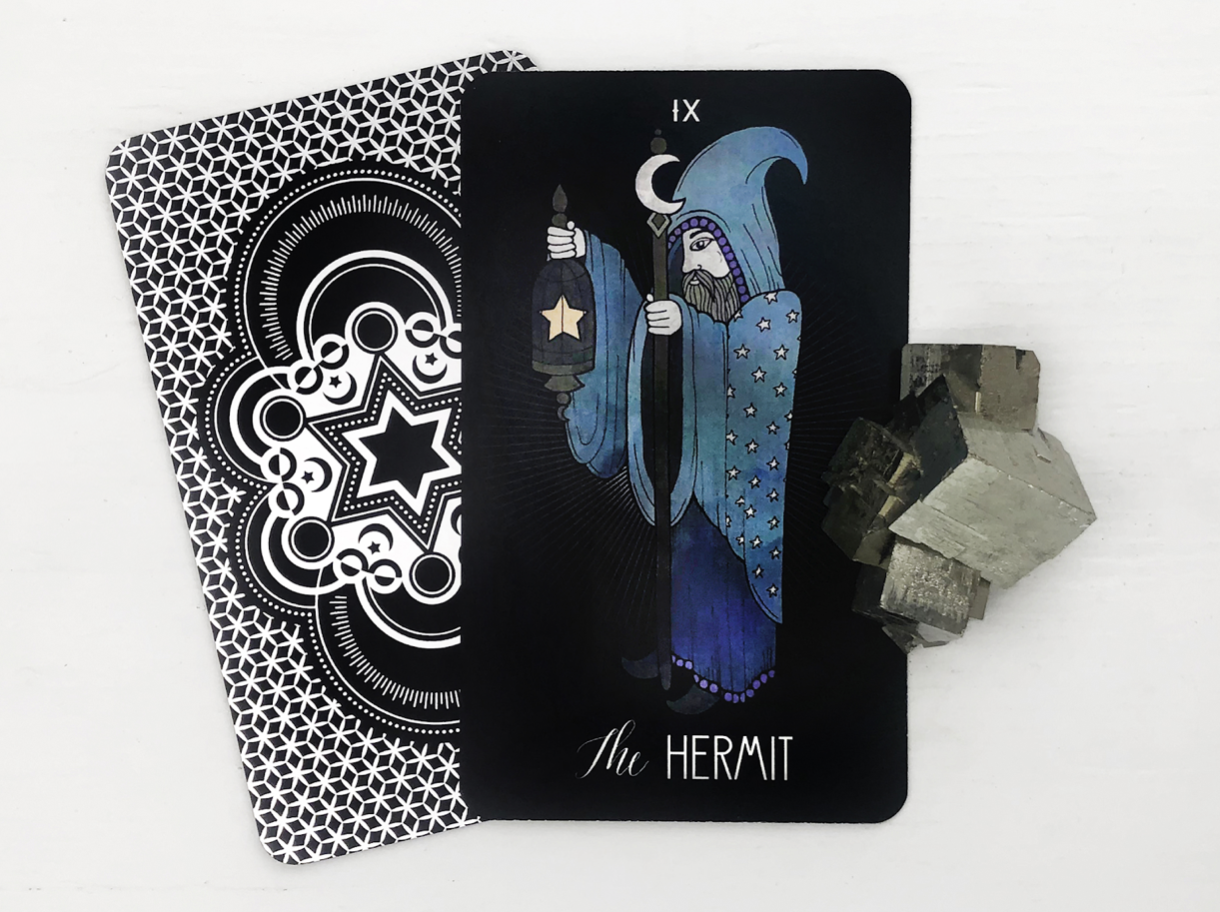 The Hermit is not a terribly complicated major arcana card. It’s meaning and symbolism are fairly straightforward, and it’s artwork evocative. Interpreting The Hermit in a reading is often a case of where space needs to be created, which we’ll explore in depth.

To best understand The Hermit and how to interpret him, this article will:

The Meaning and Message of The Hermit

The word “hermit” underwent some etymological changes in the 18th Century. The word originally meant a person who dwells in isolation for religious reasons, but around 1799 the word began to be applied to anyone who lived in solitude. Obviously, Mr. Waite-- the co-creator of the Rider-Waite-Smith deck-- wouldn’t have named this major arcana card The Hermit without these definitions in mind.

The Hermit’s meaning is inherently contained in its title-- perhaps not a physical isolation, as traditional hermits of both the secular and religious type seek, but more so a sense of diving inwards. Physical isolation was what allowed the religious hermits to avoid distractions, and so to meditate and hear the voice of God (or gods/goddesses) more clearly. These people, regardless of religion, were mystics.

The Buddah is one such example. It wasn’t until he was sitting in isolation, under the bodhi tree, that enlightenment came. Jesus wandered the wilderness for forty days and nights-- perhaps not entirely alone, if one considers the story of the Devil tempting him each day-- and returned to society more firm in his belief and convictions.

It’s important to recognize that each hermit experience happens in a natural setting-- Buddah and his tree, Jesus and his wilderness. This is perhaps key because nature, while not exactly silent, is a different type of quiet than the suburbs or a residential neighborhood at midnight. Nature strips away the labels and returns us to a state of “us.” Our essence is able to bubble up out of hiding from behind social masks and manners.

Emerson wrote a beautiful essay about this connection called Nature. Even if you only read bits of it, reading the introduction alone is a spiritual experience. In a way, the Transcendentalist movement which he helped found encases the Hermit experience. Being a Hermit is to seek Emerson’s “...original relation to the Universe… a religion of revelation to us…” and finding it within ourselves.

The aim of all of this is self-exploration, soul-searching, and seeking of enlightenment. These are the key meanings and messages of The Hermit. Dig in, dig deep, and get to work. It might feel lonely-- you may socially isolate a bit, because it’s very emotional work-- but it’s worth it. Your head and heart space will be much clearer for it.

This could also be a call to engage in Shadow Work.

Symbolism and Artwork of The Hermit Card

As we’ve explored in other tarot articles, the artwork of tarot cards is always rife with symbolism. Traditional Hermit card art, even from its earliest incarnations, features an older male figure bowed in contemplation and holding a lantern.

The older male figure is often robed as a priest, or, historically, in rather threadbare garb. The age is indicated by a beard or white or no hair, and symbolizes the gathering of wisdom from experience. Christianity had by and large become “the” religion, and men were the only clergy. The figure’s head is bowed and his eyes are closed, symbolizing that he is inwardly gazing. The lamp he holds symbolizes enlightenment. Sometimes this is all set against a nighttime backdrop, representing the “dark night of the soul” that sometimes necessitates such spiritual isolation. He may also be on a mountain or on a path, symbolizing the journey to wisdom and enlightenment.

Much of The Hermit’s artwork remains the same. In Tarot of the Old Path, The Hermit is depicted with winter at his back and spring in front of him. He has his cloak open, shielding a flame and a butterfly. A hare paws at the stick that holds the lantern. The wisdom of all things physical and spiritual is his to command. He is one with the natural world, and lit from within by the fire and carrying enlightenment out into the world in his lantern.

In The Wildwood Tarot, this card is renamed The Hooded Man, whose face is hidden in a hooded cloak embroidered with holly, which symbolized magickal powers to the Druids and the thorns on Jesus’s crown to the Christians. It carries the same lamp, and the backdrop is winter. There’s a closed door behind the figure, with a holly wreath on it. The figure is ready to show you to the door, having already been through it and knowing what is beyond it.

The popular Wild Unknown Tarot deck depicts The Hermit in black and white as a tortoise. These turtles are slow, carry their homes with them, and often represent wisdom and inner knowing because of their age and the literal “going inward” when they withdraw into their shell. The only color is the brightly lit oil lamp on the tortoise’s back, which illuminates all.

The steadiness of The Hermit’s art is testimony to its universality. This is, generally speaking, not a card whose meaning or symbolism changes much from deck to deck. Of the Major Arcana, it is perhaps the most dependable card.

Working through Sample Readings with The Hermit

So now that you’re familiar with The Hermit’s meanings and symbolism, let’s dive into some sample readings.

Let’s say you’re having some issues communicating with a family member for an important subject to you. Maybe you’re doing an intuitive reading, and you pull four cards to get a better feel on how to handle things. You get the following, in this order:

Keeping in mind the issue and question at hand, The Hermit probably refers to the action you must take in order to gain the knowledge you need to deal with this family member. The Moon, especially combined with The Hermit, indicates that you’ve got some Shadow Work to do, because if you’re feeling defensive about this family member’s reaction, it’s probably because it’s touching off something you don’t want to recognize in yourself. The Knight of Wands and 5 of Pentacles might describe the two different approaches you each have to the subject, or the experiences you’re each having with it-- one of you is gung ho and passionate to get started, the other has trauma that is unhealed from it.

While not exactly offering a solution, the cards do offer a different view of the problem at hand. You could draw a fifth card to represent the solution if you felt so called, but perhaps the solution itself is to listen and learn, and speak later.

Let’s do another sample reading. Let’s say this is not a question, so much as a self check-in. You decide to do a three-card reading to see where you’re at psychologically, emotionally, and spiritually. You pull, in that order:

Psychologically, you’re sensing a breakthrough in a cycle coming. What felt like you were doomed to repeat-- perhaps a mistake or bad habit in relationships-- you can now break through. Or if you struggle with a mental illness such as depression or anxiety, brighter days are ahead. You’re doing good work and making progress.

Emotionally, you might be distanced from your feelings. It could be dissociation. Or perhaps it's that you’re not in tune with your emotions enough-- you’ve been so wrapped up in your head that you haven’t let yourself feel. Stop dissecting yourself and just be.

Spiritually, you either need to or are (your intuition will tell you which) going inwards on a really important journey. We all seek enlightenment, but The Hermit says you’re doing the work and are almost there.

Overall the story the cards are telling you is that you’ve made a lot of progress and have a great grasp on the wisdom you can learn from books… but now it’s time to gain the wisdom from feeling. Tap into your emotions and you will find a total experience that will unveil a kernel of yourself you’ve never seen before.

Journaling Exercises for The Hermit

As with all tarot practice, we encourage you to keep a journal. Record your Card of the Day draw and any other readings you do for yourself or others. This will give you a chance to go back and review notes and develop a deeper relationship with divination. It also helps you to see if The Hermit comes up in combination with any other cards frequently. That usually indicates an important pattern.

Some “isolation exercises” for The Hermit card journaling:

When interpreting The Hermit in any tarot reading, just remember that tarot tells the story of how the message of the cards is put together by combining their meanings with how they apply to your life. If something doesn’t make sense, either pull a clarification card or write it down and sleep on it. There may be events that have yet to unfold that will make everything clearer.

The rich text element allows you to create and format headings, paragraphs, blockquotes, images, and video all in one place instead of having to add and format them individually. Just double-click and easily create content.

How to customize formatting for each rich text

Headings, paragraphs, blockquotes, figures, images, and figure captions can all be styled after a class is added to the rich text element using the "When inside of" nested selector system.