8 Feminist Musicians to Add to Your Playlist

Here are some refreshing, empowering women and gender-nonconforming musicians to add to your next playlist. 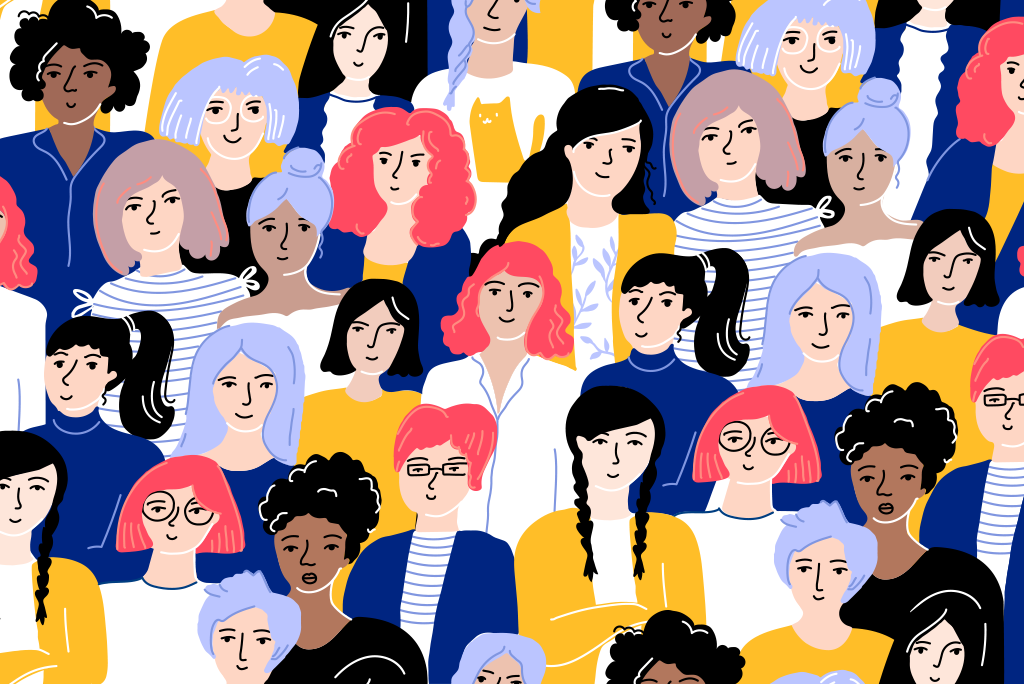 From bubble gum pop to Afro-punk to a classic indie rocker, we got you covered for new music. These are some amazing artists who believe in social, economic, and political equality.

Inequality between men and women and non-binary folks is extremely real and impacts just about ever industry, especially the music industry.  In fact, the University of Sydney’s Women, Work and Leadership Research Group published a report that showed that women were habitually disadvantaged against their male counterparts. Their research found that women were paid less than men, outnumbered by men on festival lineups, and held less industry roles within the music scene altogether. These disadvantages are deeply unfortunate, but it is important to find musicians who stand up for what’s right.

Here are 10 badass women and gender-nonconforming folks who stand by feminism and continue to make music that talks about these issues:

Janelle Monae is a powerhouse to say the least. She is a black pansexual singer, songwriter, rapper, actress, and producer.  Her music is the perfect mix between bubble gum pop and R&B. One song, in particular, that highlights her talent is Pynk. The lyrics of this song focus on the color pink to describe everything from feminine bodies to more metaphorical topics. It’s an anthem for self love and sexuality. If you haven’t watched the music video for Pynk, do yourself a favor and watch it asap!

We can’t talk about badass feminists without talking about Pittsburgh native, Kellee Maize. Kellee’s music has some serious range. She raps, she sings, and she always talks about issues near and dear to her heart. Her music is an outlet to speak on topics such as social injustices, politics, and women’s rights. I can assure you that In Tune is one of many catchy songs that will carry you through a rough patch. You’ll be humming this tune for days.

Sza, also known as Solána Imani Rowe in her personal life, has been making soul pop, neo soul, and R&B music for the past decade or so. Her style has changed and continues to evolve beautifully. Her music is like listening to the older sister you wish you had.

All of her albums are incredible, but a go-to favorite of mine is her 2017 album, Ctrl. Specifically, I absolutely love the powerful tune, Supermodel. This song is about Sza’s experience with an ex who wasn’t seeing all of her worth and inevitably, she decided to leave him. It’s a song about falling out of love with someone who is not right for you and harnessing self-love.

Girlpool’s sound has definitely changed over the years. This Los Angeles duo is made up of  two indie singers, Avery Tucker and Harmony Tividad. Their most recent album, What Chaos is Imaginary, highlights Tucker’s voice since coming out as transgender and taking testosterone. The testosterone has lowered his voice, which altered the overall sound of their music.

While previously Tucker and Tividad’s voices matched each other, now they stand alone and come together in a beautiful new way. Much of their new music wrestles with the idea of becoming a new person, constantly changing, and being kind to older versions of ourselves. One amazing song on What Chaos is Imaginary is Hire. It is a window into Tucker’s inner thoughts and showcases his new vocal range perfectly.

Trust me, Courtney Barnett will be the indie rocker of your dreams. On her 2018 album, Tell Me How You Really Feel, she tackles toxic masculinity, misogyny, and the patriarchy. She is effortlessly cool with lyrics that dig deep. In her song, Nameless, Faceless, she discusses the power and fear men can provoke upon women. The chorus goes like this, “I wanna walk through the park in the dark/Men are scared that women will laugh at them/ I wanna walk through the park in the dark/ Women are scared that men will kill them/ I hold my keys between my fingers.” This song and many others by her are power, real, and a serious force to be reckoned with.

Okay Kaya, is a Norwegian-American musician and actress from New Jersey. She is a singer-songwriter who has found the perfect balance between sarcasm and pure emotion through sharing glimpses of her identity and experiences.

From her album, Both, you’ll find the tone of the album to be very melodramatic. It is a slower pace than some of the other artists on this list, but she’ll continue to reel you in with her lyrics. One song that always stands out for me is IUD. As you may guess, it is a song about one form of birth control, the IUD, sex, and the reproductive rights to her body. With lyrics such as, “We could go to planned parenthood/I heard they're not doing so good/A bunch of men sit around and scheme 'bout/What women do to their bodies,” she doesn’t beat around the bush. She openly and honestly talks about her experience as a woman using birth control in a world where using birth control isn’t always deemed as okay.

Mykki Blanco is a rapper, performer, and poet apart of the Afro-punk scene. They have described themselves as both transgender and multi-gender. Their music is transparency at its finest and anything but boring. As a creative at the top of their game, they continue to explore race, sexuality, and gender through life experiences.

Their latest single, You Will Find It, is more tame than most, but it’s a great place to start. In the song, they reference two of their idols, Lady Gaga and Alice Coltrane, who’s powerful spirits have clearly inspired Blanco over the years. This song is all about life experiences, desire, and self-love. We can’t get enough of it.

Grimes will most likely inspire your next extraterrestrial outfit and you can listen to her music while you get in the zone. Her genres of music, which aren’t cut and dry, are mostly dream pop and electronic music-- hence the space vibes. She has mastered her craft and continues to produce her own music.

Whether you’re listening to her for the first time or revisiting her entire discography, give her 2012 album, Visions, one more listen. You won’t regret it. In particular, I recommend the song, Genesis.  It is a fun, electro-pop song that will surely lift your spirits.

Collectively, all of these musicians do a fantastic job using their music as a tool to explore their life experiences as women and gender-nonconforming individuals. Their messages are able to connect beautifully with so many people and amplify similar stories. Through their music, they are able to highlight the importance of feminism in all aspects of our life. Whether we are creatives, medical professionals, educators, or whatever the profession may be, we all deserve equal opportunities. Music from these artists is a beautiful reminder of that. So, add them to your next playlist!

Do Your Part to Lower Your Carbon Footprint in 2021 by Taking These Easy Steps
We all have to step in to prevent climate change. Here are a few easy but impactful things you can do this year to help the effort.
Read More >>
How to Throw the Best Zero Waste Kids Birthday Party
Give your kids the best birthday party experience, while keeping it environmentally friendly!
Read More >>
Important Mental and Physical Health Benefits of Walking in Nature
All the reasons you should be incorporating outdoor time into your schedule!
Read More >>
What to Bring To Kripalu Yoga Class
everything you need to have the best yogic experience
Read More >>
Fools Go Rushing In: The Knight of Swords Tarot Card
How to work with the Knight of Swords and interpret it in any reading
Read More >>
How to Effectively Dominate and Achieve Success while Busking
The top tips you need to be successful at busking!
Read More >>
Eco-friendly Gifts Your Valentine (and Mother Earth) Will Love
Show your loved one some appreciation this Valentine’s Day with these eco-friendly gift ideas.
Read More >>
Important Signs to Look for When Opening Your Solar Plexus Chakra
Home to your internal power, your solar plexus chakra could be opening without you even realizing it.
Read More >>
Chakra-Inspired Yoga Flow (And Why It Matters)
align your chakras with seven easy poses in this relaxing yoga flow
Read More >>
The Must-Have Eco Friendly Makeup Brands You Need in 2021
The seven best and ethical makeup brands on the market right now
Read More >>
Knight of Cups: Understanding the Tarot Card
From guidebook meaning to interpreting a card spread, here’s everything you need to know about working with the Knight of Cups
Read More >>
Pretty Tarot Decks You Didn’t Know You Needed
Time to spice up your tarot card collection? These gorgeous decks will make it breathtaking.
Read More >>
Must-Have Sustainable Baby Products for the Environmentally Conscious Family
The best environmentally conscious baby products you need to be using to help save our planet.
Read More >>
Knight of Wands Tarot Card Explained
Your personal guide to understanding the Knight of Wands and how to interpret it in any reading
Read More >>
Practical Nurturing: the Queen of Pentacles
How to read and interpret the Queen of Pentacles in any reading
Read More >>
With Sword and Head Held High: Queen of Swords
How to interpret the Queen of Swords Tarot Card in any reading
Read More >>
Technology Products That Are Sustainable. What?
Technology products that will lower your bills and your energy consumption.
Read More >>
How To Make Your Period Sustainable
Life-Changing Sustainable Period Products
Read More >>
Eco-Friendly School Supplies That You Must Have
Everyone is talking about these super cool supplies!
Read More >>
Safe Crafts Ideas For Kids
Better and Safer Alternatives for Your Crafting Moments
Read More >>