Why do People go Vegetarian or Vegan?

Vegetarian and vegan diets grow in popularity every year, and there are very good reasons why. 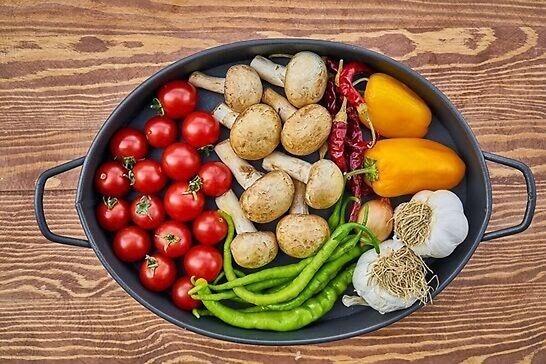 Vegetarian and vegan diets grow in popularity every year. More people continue to see the merits of these diets as time goes on. Each person who chooses one of these diets has a different reason for it. Some people have health related reasons, and some people have reasons related to animal welfare. Some people do it for the environment, and some might do it for religious purposes. Any reason is valid. You might connect best with at least one of those reasons, or maybe you are on the fence. Changing the way you eat takes a lot of personal conviction.

There are many benefits associated with vegetarian and vegan diets. There are many health and environmental benefits that make these diets viable for a growing number of people each day. Improving health is often something that encourages people to make different choices. Improving your health is something that can greatly increase your lifespan and improve the quality of it. Helping the environment is something that betters the quality of life of animals and has a beneficial impact on us as well. Vegetarians and vegans are people with diverse reasons for their choices. Anyone can become a vegetarian or a vegan as long as they have the desire for it.

What is the Difference Between Vegetarianism and Veganism?

These diets are similar, but have a few major differences

What is a Vegetarian?

A vegetarian is someone who chooses to eliminate meat from their diet. They normally continue to eat certain animal products like cheese, milk, and eggs. The main goal is to avoid eating products that animals have to be slaughtered to obtain. As long as an animal is kept unharmed when a product is obtained from them, it is an acceptable part of a vegetarian diet. Vegetarians tend to have a healthier diet than the average person. That is because they tend to focus on their food more than most people do. They often value the contents of their meals and make sure it nourishes their bodies. Their diets are usually rich with fiber dense foods that bring on optimal gut functioning.

Many people make meat a focal point of their meals and don’t get the amount of nutrients they need from other food sources. Living a vegetarian lifestyle often makes a person far more conscious about their food choices, and so getting abundant nutrients from their diet becomes normal.

What is a Vegan?

A vegan is someone who chooses to eliminate all animal products from their diet. Rather than stop eating just meat, vegans avoid eating anything that comes from an animal even if they are not killed for it. Milk, honey, and cheese are all animal byproducts and are not included in the average vegan diet. There are vegans who disagree on what a harmful animal byproduct is, but the overall goal is to eliminate anything that can cause harm to animals from the diet.

For most vegans, this practice extends past food. Most vegans refuse to wear leather, fur, or use products tested on animals. Veganism is a lifestyle that people dedicate themselves to in order to cause the least harm possible. Vegans tend to be very creative with their meals given all the food items they eliminate. They combine legume, nuts, and grains to create cool foods combos meant to replace animal products. A vegan diet was once thought to lack in many nutrients, but over time it was found to be an adequately balanced diet, often even a beneficial one.

Why People Choose to Eat Vegetarian or Vegan

Animal welfare is a top reason people choose to go vegetarian or vegan. Animals are mistreated on a regular basis so that we can have access to their meat. Some people like to make a conscious effort not to encourage that abuse. The less people who eat meat and other animal products, the less demand there is for it. This proves to be a benefit to the animals exploited for their meat. Countless documentaries throughout the years have shown us firsthand images of the abuse farm animals suffer on farms for our benefit. Most are severely restricted in movement, fed inappropriate diets, and overall not allowed to live their lives freely.

Many people who choose to go vegetarian or vegan believe that animals deserve as much freedom as we get to have. A life in captivity does not appear to be suitable for any species. Many people seek to minimize the need for captive livestock through their food choices.

The Foods We Eat Greatly Affect our Bodies

Health is one factor involved with why some people decide to adopt a vegetarian or vegan diet. Meat is known to have certain adverse effects on health when eaten in large quantities. It is a very large part of many American’s diets, one factor that contributes to our country’s overall poor health outcomes. Meat is known to raise cholesterol and clog arteries. This is something that can lead to severe illnesses like heart disease, cancer, and diabetes.

A healthy vegetarian diet is low in fat and high in fiber. This is a result of the vegetables that play a large part of a good vegetarian diet. They are high in fiber and filled with multiple nutrients that are not present in meat. Though being vegetarian or vegan doesn’t automatically mean that you have a good diet. You have to be conscious of your food choices and make sure you intake the best foods for your body.

The Environment Could Always Be Treated Better

Industrial meat farms are known to have detrimental impacts on the environment. Many people who choose vegetarian or vegan diets do so to minimize that impact. Animal habitats are continuously disrupted and torn down to accommodate meat farms. Not only does it affect multiple animal species when their habitats are taken away, but deforestation removes our land’s capacity to disperse oxygen. Trees are a large source of oxygen on land and keeping them intact keeps our air healthy for all living creatures.

Water pollution is also a problem with industrial meat farms. Animals on these farms produce about 130 times as much waste as all humans combined. This waste pollutes our waterways. And animal waste isn’t the only thing sullying our water. Hormones, antibiotics, and fertilizers also get into the water and cause destruction. It causes the degradation of coral reefs as well as health problems. Animal excrement from farm animals also contributes to air pollution. A lot of ammonia is released into the air along with hydrogen sulfide. In high concentrations, those gases can contribute to illnesses like lung inflammation or asthma. Decreasing the demand for these harmful farms can greatly benefit our environment.

Some people don’t necessarily have strong moral reasons for their food choices. Some just happen to be huge fans of plant-based food options. Whatever reason someone might choose to go vegetarian or vegan, they still contribute to aiding the environmental goals of others. Meat isn’t appealing to everyone. When some people see a piece of meat, their instinct is not to crave it. There are some vegetarians and some vegans who enjoy the taste of meat, but despite that choose to abstain because of their morals. But that isn’t always the case.

There are people who don’t care for meat or animal products, just like some people aren’t interested in certain vegetables or grains. Both vegetarian and vegan meals can be extremely fulfilling. They can be tasty, healthy, and exciting. It is a misconception that vegetarian or vegan diets lack in flavor and nutrition. Vegetarian and vegan meals can be just as crave worthy as meat-filled ones. Plenty of non-vegetarians enjoy meatless meals on a regular basis, some just choose to do it all the time!

There are many reasons why people choose to go vegetarian or vegan. They are each great lifestyle choices that more people see merit in every day. Some reasons for these diets may be more relatable than others, but overall it's a healthy choice that continues to grow in popularity!