The Eight of Cups Tarot Card: Meaning, Interpretation, and Symbolism

What the Eight of Cups tarot card represents, and how to interpret it in a reading. 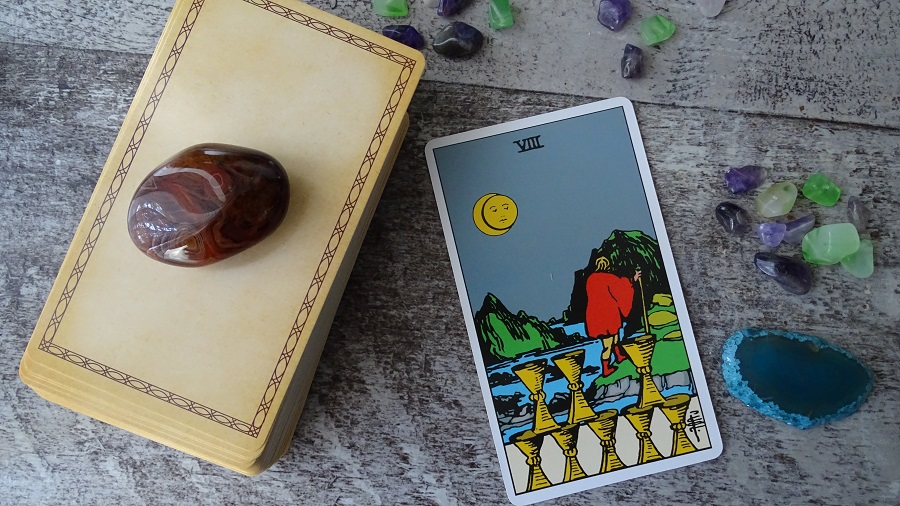 First, What is Tarot?

Each deck of tarot cards comes with 78 cards, and are marked much like playing cards. Each deck contains four suits: wands, cups, swords, and pentacles. Additionally, there is one card called The Fool which is similar to the joker in a traditional pack of playing cards. Tarot cards have been used for centuries for fortune telling, but before that, they began as a simple card game.

There are two groups of cards in a deck; the Major Arcana and Minor Arcana:

The Major Arcana contains 22 cards, and each of them represent something deeply spiritual, a lesson, or greater understanding of ourselves and the world.

The Minor Arcana are the remaining 56 cards. These cards relate more specifically to everyday life; the practical or logical issues in our human lives.

A deck of tarot cards is your personal spiritual guide. The cards are meant to guide us through the trials and tribulations of life, and enlighten us with important lessons along the way. Let’s explore the meaning behind the Eight of Cups, a card in the Minor Arcana group.

The Eight of Cups Symbolism

In each depiction of this card, we can see the same important elements: the cups, the figure walking in the opposite direction, their staff, the eclipse of the sun and moon, and the mountains in the background.

The figure in the cloak is seen walking in the opposite direction of the cups. They are leaving behind whatever was holding them back. They are moving on to better things which are more fulfilling, despite the difficulty of saying goodbye to their life, and the fears that they carry with them.

The staff represents support and resilience. The person is leaving something behind with only a staff and the clothes on their back. It is meant to be the thing that supports them through their difficult journey.

The eight cups represent the emotions and so-called baggage that we leave behind when transitioning. The cups are symbolic of what the person is walking away from, whether good or bad. Perhaps they are leaving behind a connection, an accomplishment, or perhaps it is a life which is not serving them.

The eclipse is a very powerful symbol in the spiritual world. It represents extreme change, and the moon and sun combination represent a powerful balance of energies; wisdom and understanding, and strength and abundance.

In tarot, mountains represent growth and strength. They are guiding the person to their new existence, reminding them of their goals and past achievements. It also represents the obstacles which are to come during their journey.

The Eight of Cups Upright Interpretation

The upright position of the Eight of Cups represents a difficult turning point; one which is bittersweet. It represents necessary change, despite possible heartbreak, emotional upset, vulnerability and abandonment. Perhaps this means leaving behind a relationship, a job, a city, or your family. If you are receiving this card in a reading, it could mean that you are about to embark upon a journey of self-discovery, and that big changes are coming.

The Upright Meaning in Love

The Upright Meaning in Career

Much like the romantic interpretation, the upright meaning of the Eight of Cups in career represents changes to come. Perhaps your career or business has left you unfulfilled. Although you may have positive feelings about it, in the end, it is not serving you. This card represents a career change, one that will leave you feeling bittersweet. In some readings, this card in the upright position can also represent losses to come. It is reminding you to be smart with your money and not to put your finances at risk.

The Eight of Cups Reversed Interpretation

The reverse interpretation means you have found yourself in an unfulfilling situation, but cannot seem to make a change.

Unlike the changes that are represented in the upright position, the reverse symbolizes staying in an unfulfilling role. Whether it be in a relationship, a career, a familial situation—you are too afraid to leave. While you know you are not in the right place in your life, you do not have the emotional or self-awareness to move on and leave it behind. When this card shows up in a reading, it is telling you that you’re in a situation of stagnation; that you are too afraid to do what you know is right and move on. It also represents your ability to fake happiness.

The Reverse Meaning in Love

Receiving this card in reverse can mean that you are in a relationship that is not serving you, and you know it. Perhaps you are not mature enough to deal with the issues in your relationship, which are only hurting you and your partner in the long run. In your current situation, there are things that need to be dealt with, but are being swept under the rug, causing more of a standstill between you and your partner. Perhaps you are afraid of being alone, and do not want to leave your relationship. Because of this, if you are single, it could represent your inability to be in a relationship because you become too attached to people.

The Reverse Meaning in Career

While the reverse tells you the same about how unfulfilling your career is, contrary to the upright meaning, the reverse represents your inability to let go and move on from your position. Perhaps you are afraid of change, or you are afraid that you will have nothing to fall back on, so you remain where you are. If you receive this card, it means you are in desperate need of change, and you need not be afraid, but brave in your decision to move on. Even though change is uncertain, it is fruitful in the long run.

The bottom line is, the Eight of Cups represents big changes to come. Your life at the moment is stagnant, and there is more in store for you than what you are allowing yourself to experience. Specifically when it comes to relationships and career, the card is telling you not to be afraid of change, even if it means abandonment, uncertainty, and leaving things behind. Although bittersweet, in the end, change is good. It’s necessary for growth, and you won’t be left alone, like the card depicts, you’ll have your staff to support you, the sun and moon by your side, and the mountains to look forward to.