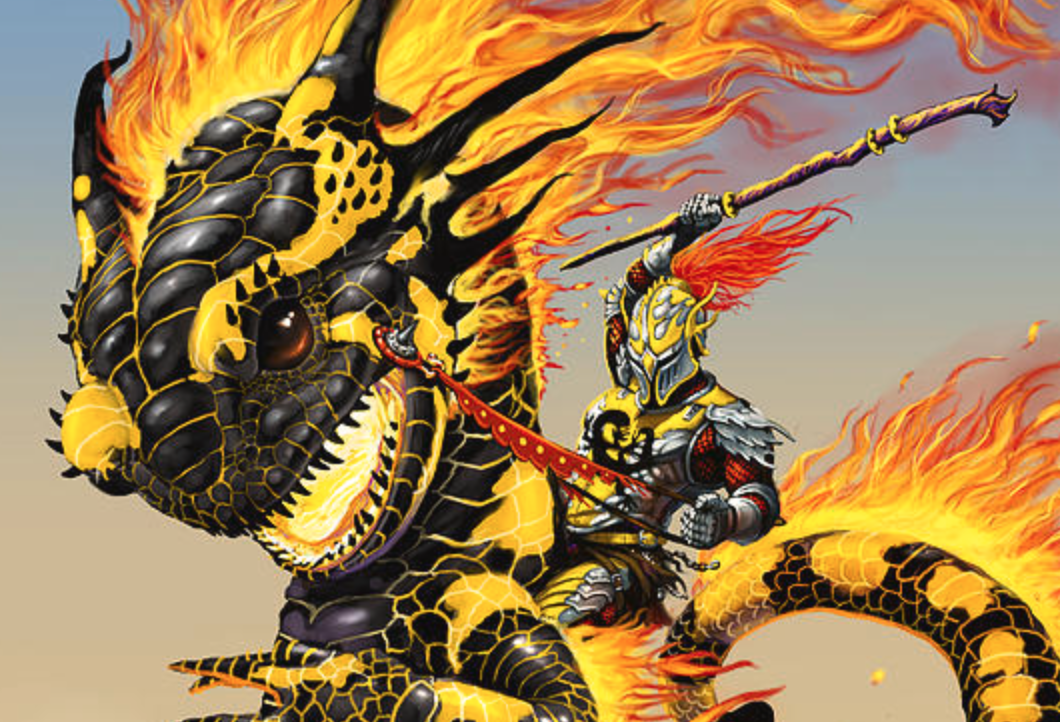 The Wands Suite is all about fire, energy and passion. The Wands Court Cards reflect that in various ways-- we’ve already explored the King of Wands, who demonstrates a passionate and warm leadership-- and the Knight of Wands is no exception. They also typically represent people, although with knights that area is somewhat grey and open to interpretation.

Get ready to light your fire, baby. This is the Knight of Wands, and he’s ready to shine.

The guidebook meaning and message of the Knight of Wands

What we mean by the “guidebook meaning” is that this is typically the description you’ll find in most tarot deck guidebooks. The difference between them and us is that we won’t just give you keywords and a description, we’ll help you dive a little deeper into understanding the message that the Knight of Wands is trying to convey.

Remember-- with tarot, it’s all about putting everything into a human, personalized narrative that fits the situation. While some believe that tarot is a divination tool to tell the future, our focus here is more on how it reveals the emotional, psychological, and social threads of our lives that we may not realize are influencing and connecting us to our questions.

Let’s start with the position and role of a Knight. A Knight is a warrior of the crown, blessed by the Powers that Be and commanded by the Crown to act as both soldier and envoy. Knights are seen as representatives of the Crown they serve, so they are speaking and, primarily, acting on behalf of their King and Queen. Their role is not to answer to royalty’s whim and wishes, but to protect and serve the Crown and Country. As such, there is a certain amount of idealism held in the position, but also a seasoned sort of wisdom that is forming with each deed and adventure.

The Wands suit is about fire, passion, and creativity. Therefore, this Knight is someone who is acting on or leads their life with their passion-- they fight ferociously and creatively, and serve with their whole heart and soul. Their service is the reward, in a way, although winning is a definite goal to be celebrated whole-heartedly. Energy, enthusiasm and confidence are hallmarks of this Knight. Whatever action or venture you’re undertaking will most likely succeed if you act with passion-- but also with a good plan. The Knight of Wands can be a good strategist-- not as good as the Knight of Swords, as logic is their forte-- but their creativity and intelligence make them no joke if they can remain focused enough to make a plan. The plan’s execution, however-- and solving any problems inventively as they pop up-- are more up this Knight’s alley.

Socially, the Knight of Wands is charming and extroverted, often one to mingle and liven up parties with spicy or funny stories. They make very warm and welcoming hosts and have rather magnetic personalities. But try to restrict this person, and they will instantly shut down and become the kind of cold that burns.

Upright keywords and ideas: successful ventures ahead, confidence, passionate leader, idealistic actions, creative, fighter, good at improvisation, someone who inspires others to action by taking it themselves, a flirt

A Reversed Knight of Wands is not someone to be trusted or followed. They will still be rather charismatic, charming, and passionate but they use it to dominate rather than to lead. A general lack of ambition or confidence sets in, or a reckless abandonment-- a person who runs hot and cold very quickly and unpredictably. When a fire burns too much or too hot, it either becomes violent and destructive or leaves a burnt out and passive husk. Plans meet unexpected obstacles that you lack the motivation or patience to fix, resulting in bitterness, jealousy, or even a sulkiness.

Reversed Knight of Wands keywords and ideas: daredevil, out of control, abusive, domineering, aggressively competitive, showing off, a braggart, burning out, a lack of inner spark, lazy

Work with the Knight of Wands energy and narratives

By now, we hope that you’ve read at least one or two of the other articles in this “How to Interpret Tarot Cards” series, so you are probably familiar with the concept of keeping a tarot journal. This is where you keep a record of notes about working with each card and exploring the energy and narrative it has.

First, look at the traditional Rider Waite Smith Knight of Wands artwork. The Knight’s armor is overlaid by a yellow tunic or robe, with some red plumed decorations. His horse is orange in color, and they are reared as if to charge ahead. In his right hand he holds a giant wand or rod, and his horses reigns in his left hand. Do you understand the symbolism involved in this artwork?

Make a chart of sorts in your tarot journal to compare the traditional artwork with the artwork of your own deck. On one side, list the attributes and their symbolism for the RWS artwork-- what do the colors red, yellow, and orange mean? Doesn’t his robes look like flames? Did you notice that his robes have a lizard print-- look up lizards associated with fire. What is it? What is the significance of holding the wand in his right hand and his horse’s reins in the left? (Hint: the right hand generally pushes or puts out while the left hand receives.)

In the other column, describe your Knight of Wands card. What symbolism is retained by the artist, and what is different? What might those similarities and differences mean?

Take some time to read up on myths, folklore, and religious stories about warriors who either have a strong connection to fire or were praised for their passion in fighting and service. Beowulf is a great place to start, both as a story and a Knight of Wands. Although we recommend reading or listening to it rather than watching the movies for this purpose-- they generally make a muck of the story and would not serve your purpose.

We’ve also put together a list of journaling questions to help you connect to the Knight of Wands energy and message:

A worked example and a homework assignment

Now that you’ve come to understand the Knight of Wands thoroughly, here’s a worked example of a reading and a little homework assignment. Remember, when interpreting a reading, think about the card’s meaning as you have come to understand it, and how it relates to the card’s position in the reading and relationship to other cards. Multiples of the same number or the same suite of cards is significant (when that happens, research the number’s symbolism).

Avery is faced with a dilemma at work-- she must choose between two different projects and two different teams. She decides to turn to tarot to help her make a decision as to which project and team to pick. Here are the questions and tarot cards Avery pulled:

Here’s our interpretation: If Avery chooses project/team A, she will be on a winning team that thrives on competition. This competition may mean winning at a cost she may not completely enjoy, or it could also mean that the team and project will be rife with inner conflict as the team competes with each other instead of working as a team. Either way, the 5 of Swords did not sit well with her. The way she sees it, the benefit of working with project/team B is that it definitely puts her on a work path to more opportunities-- it might even lead to promotion if she manages it well. The basis of her decision should be what drives her passion-- is she the type to thrive amongst competition, or is she the type to be motivated by future opportunities?

Here’s your homework assignment: use the same questions and situation, but the cards are going to change. It’s up to you to determine the narrative of how they go together to answer Avery.

Leave your answers in the comments section.

Be sure to check out the other articles in this series-- we’ve already done the Major Arcana, the Kings, and the Queens. Keep checking back for more as we continue to explore the Court Cards!