From guidebook meaning to interpreting a card spread, here’s everything you need to know about working with the Knight of Cups 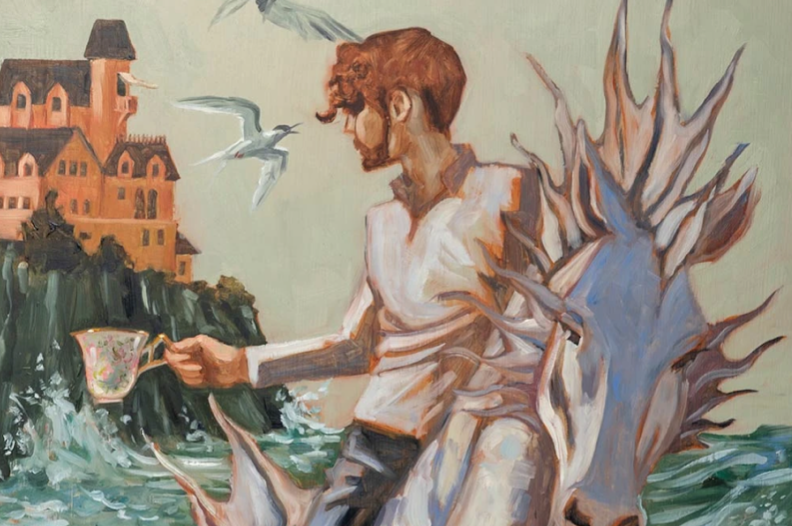 The Knights of the tarot deck are the doers, movers and shakers-- highly focused on action, as they are already on their journey through the levels of the Court Cards. Since they’re not top royalty, they’re prone to be more Extra about everything, so they’re upright and reverse positions both tend to be loud. In terms of actions, being upright or reversed should help you decide if the Knight’s actions would be helpful or harmful-- or if inaction is the key.

In this article, we’ll discuss:

Get ready to drink deep, my friends.

Getting the guidebook view of the Knight of Cups

When we talk about the “guidebook” view we mean the basic meaning, keywords or concepts to help you remember the meaning, and a quick touch on the message of the card. Some guidebooks also include a description-- we save that for the next section, so that we can use symbolism to dig deeper. So hang tight for that!

First, we’ll explore the upright meaning of the Knight of Cups. Upright means that when the card is pulled from the deck, it’s right-side-up. Some describe this as the more “positive” attributes of the card, but it’s more that this is what the energy of the card is like when there are no blockages. The upright Knight of Cups is usually a person taking actions on their feelings-- Cups are, after all, about emotions and mental health. When this Knight shows up in a reading, it’s time to take actions in regards to what is in your heart (the total opposite of the Knight of Swords).

Often nicknamed the “White Knight” of the tarot deck (in the proverbial way, not the racist way), the Knight of Swords is the embodiment of chivalry (minus the condescension towards women) in all its best qualities: kindness, compassion, a drive to do the right thing, affectionate and charming, creative, and good at negotiating but capable of fighting dragons if the need arises. As a friend or colleague, they are very good at negotiation and are often the “glue” of the gang.

The Knight of Cups Reversed represents what happens when the aspects of this knight go to extremes or become roadblocks to growth. This is when love and romance turn to obsession, chivalry turns to an effect to manipulate the heart, or you become so stuck in your emotions and unable to reach enlightenment. Brooding and vain, the Reversed Knight of Cups could alternatively be a love ‘em and leave ‘em kind of person, so afraid (or scared) that they cannot form emotional attachments.

Digging deeper into the Knight of Cups

Digging deeper into tarot cards involves some research, reading, and self-exploration. Can you read tarot without these things, and just rely on the “guidebook” approach? Well, sure. But not very well.

As we have in previous articles, we’ll start with the Knight of Cards artwork from the Rider-Waite-Smith deck, because it’s so iconic and instantly recognizable. All tarot artwork uses symbolism to emphasize the nuances of the meaning and message, and it’s important to become familiar with the symbolism. Symbolism is often hard for modern folks with no background in myths or religions to understand, so this is where the research starts coming into play.

The Knight of Cups is the knight whose artwork does not seem to contain much momentum-- there is forward-movement, as evident by the horse’s stance, but given the properness of the knight’s posture-- and the fact that the water is no sloshing out of the cup he holds-- the momentum is slow. This symbolizes the need to take the time to understand and feel our emotions, but not to get mired down and stuck in them. The golden cup in hand is offered carefully to those who will drink-- the gold symbolizing its high spiritual stature, and the vessel representing emotions. His helmet and spurs are ornamented with wings, symbolizing the celestial or daydreamy qualities of his thoughts and feelings. The red fish on his cloak represent water and fire-- combined, symbolizing creativity and passion. The land through which the Knight rides is desolate, with a single river cutting through the sand and rock-- what might the river symbolize?

Take the time to examine the artwork of your tarot deck’s Knight of Cups. How are they the same? What’s different? Look up the symbolism involved in the differences.

Since the Knight of Cups is referred to as the “Knight in Shining Armor” of the tarot deck, it’s time to brush up your faerie tales-- Rapunzel, where the Prince sacrifices his eyes and his royalty (albeit only for a time) to find and rescue his true love from the wilderness, including the little family they made while she was still in the tower (in some versions, Rapunzel had twins all by herself while in exile-- so this also means the Prince took full responsibility of the results of his passion). And let’s not forget Sleeping Beauty, either. A good example of both the upright and reversed versions is to look at the French addition to the Arthurian Cycle: Lancelot. How is he the upright and the reversed knight?

To really connect to this card, take some time to examine some of the questions the Knight of Cups asks of us:

This is not an exhaustive search, but it’s a good place to get started.

A sample reading plus one to try yourself

When putting together a reading interpretation, you need to keep in mind three things: the meaning of the card, how it interacts with the role in the reading/other cards, and how it relates to the question/querent. Let’s take a look at how we put together a sample reading.

Situation/Question: Jack’s ex-boyfriend has recently resurfaced in his life, but Jack isn’t sure what kind of relationship he wants with him, if any at all. It’s not that they left on bad terms, but Jack just wants to make sure he’s approaching the situation correctly.

So let’s string this together. The 6 of Cups probably refers to the past that Jack and his ex-boyfriend have together-- it was good while it lasted, and thinking about it brings him joy. The 6 of Swords shares the same number, which is also a multiple of two-- the number of duality and choice-- and a multiple of 3-- a common sacred number and symbolizing a full circle. This number speaks to both the choice that Jack has to make, and the idea that this person and/or relationship has come back full circle-- they are being “reintroduced” in a way, since neither is the same person they were when they were in a relationship.

The 6 of Swords being a card of transition and change indicates that Jack and his ex’s relationship will never be the same. They cannot go back to “the way things were” (the 6 of Cups). But what about the type of relationship they could have now or in the future? Should Jack even really reach out to try? The Knight of Cups Rx indicates that he shouldn’t make this decision based on feelings, or he’ll get stuck and be unable to grow. If Jack tries to have another romance with his ex, it simply will become toxic or shallow.

Given this information, Jack decides to simply be content with a casual friendliness, which enables him to be emotionally available to himself and someone else in the future.

Let’s take a look at this same situation with different cards. There’s an optional twist at the end, too.

If you’d like to take on an extra challenge, add this clarification card:

Leave your interpretation in the comments!

We hope that you are enjoying our “How to Interpret the Tarot” series here at KelleeMaize.com. We’ve done the whole major arcana, and are working on the Court Cards. Be sure to check them all out!