But is it hot or cold? How to interpret the Justice major arcana card in any reading 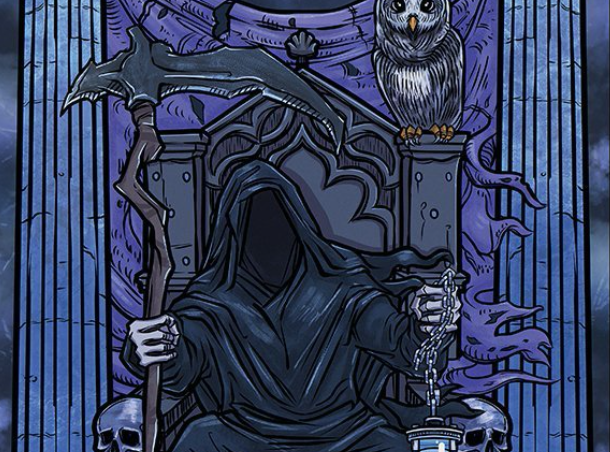 Image courtesy of The Ghoulish Garb.

Do not conflate “justice” with “equity.” They are linked, but they are not the same thing. Justice is what brings about the balance of fairness, while equity is the existence of such balance. This may seem like a simple concept on the surface, but a deeper dive shows a more complex side to this major arcana card.

Get the sword and scales, and let’s dive in.

Start with the art

If you’ve read our other articles in this series, you know that the artwork of each tarot card is significant and contains lots of rich symbolism. If symbolism is something you struggle to understand, that’s okay-- there’s nothing wrong with you.

We find that reading lots of folklore, myths, legends, sacred texts and the like to be really helpful in understanding symbolism. Sometimes when you struggle with it, it’s simply a lack of knowledge. But we also know that not everyone’s brains work in a way that understands symbolism, and there is absolutely nothing wrong with that. If this sounds like you, we’d recommend that you read this section anyway, since it will give you some insight into how others see the tarot artwork. (But if you skip to the next section, that’s okay too.)

At the end of this article’s introduction, we mentioned a sword and scales. These are two key pieces in the traditional Justice card artwork. The scales represent a few things-- the most obvious is balance and weighing both sides of the argument or issue, and another is possibilities. The sword represents impartiality and the finality of the decisions made, but it’s also worth noting that the swords represent air and intelligence. Justice’s double-edged sword can cut both ways, as well as through lies, falsehoods, illusions, and delusions.

The original Rider-Waite-Smith card depicts Justice as a woman on a stone bench, dressed in red, crowned, holding a sword in her right hand and the scales in her left.

The red robes symbolize her status at court-- red in general also symbolizes anger/love and blood (either death or life), but red was a color traditionally reserved for court members and sometimes even further restricted to kings and queens. In more ancient times, there was a real concern over being able to identify someone’s social status quickly, so there were sumptuary laws that restricted colors and materials to specific social classes. Red was one such color, and the RWS creators knew this, so its usage here is deliberate and adds layers of meaning.

Her crown is squared off, representing her authority over law, though she is also subject to it herself. The two pillars in the background mimic the duality of right/wrong, and provide a perfectly balanced background. And while it may seem like a minute detail to point out that the tip of her white shoe is visible, white represents the spiritual realm and the purity of Justice’s actions and decisions.

Keywords and concepts in Justice

When we talk about the idea that “justice has been served,” we are usually referring to someone getting a punishment for a crime. And while that is valid, we’d like to invite you to dig deeper.

As we said in the introduction, “justice” may seem like a simple concept, but we promise you that it’s not. Think about what “justice” is-- the restoration of equity and balance, that “all is right with the world again” mentality, and fairness. Think about the scales and the sword in the artwork-- balance and impartiality, possibilities and decisions. Not punishment, necessarily-- that’s part of it, but the concept of punishment gets spread out a little with the Judgement major arcana card.

The Justice card is ultimately about karma, but not in the “reap what you sow” kind of way-- or least not ONLY in that way. If you have been cruel or brutish, this card may be a warning to change your ways before karma drives her bus over to your house and through the front door. However, if you have a clean conscience and have acted with kindness and good intentions, this may symbolize either a favorable outcome or a positive resolution to a situation.

In other situations, finding Justice in a reading may indicate that you are coming to a big decision, and making it is unavoidable. You cannot escape making the decision, but your choice will be made of your own free will and may prove a turning point in your life.

Keywords and concepts of the Justice card are: decisions, balance, karma, choices

Personalizing your relationship with the Justice card

Justice may seem like a card with lofty messages and ideals, but it’s important to remember that the major arcana cards are all archetypal moments in our human lives. The archetype of Justice is older than history. So of course it may seem a bit overbearing or out of the realm of our normal existence.

Here are some journaling questions to help you build a relationship with the Justice card:

We’d also recommend spending some time looking at the artwork of your deck’s Justice card and journaling about its similarities and differences to the traditional card. What extras are there and what do they symbolize?

Putting the knowledge together in a practice reading

Let’s practice some Justice card combinations and in a specific scenario that you’re likely to encounter.

Example: You haven’t been feeling yourself lately. You feel blah, uninspired, and heavy. You’re not depressed, but you’re just not happy. And you’re very aware of your physical discomfort. Perhaps you’ve found your grocery bills a bit higher because you’re buying more ready-made food rather than putting in the effort to cook.

So you decide to shuffle the cards and see what’s up, and what you can do about it.

The cards you draw are:

And just for kicks, you decide to draw a clarification card by turning the deck over and seeing what’s at the bottom-- what hidden little factor is influencing this reading. You draw King of Swords-- someone who knows their mind, has good judgement and exercises fairness, and uses his mind to solve problems.

You have two pentacles, so the health & wealth and physical realm are definitely at play here. Perhaps you’ve started working a bit longer hours and working out less. Or your finances took a hit and you had to drop your gym membership. Either way, when you remember that Justice is all about balance and fairness, it’s clear that your physical health is out of whack and you need to do something about it-- probably work out more, clean up your eating habits, and create some healthier ones. In fact, given that the grocery bills were a clue (you thought of them specifically when thinking your question), there’s the combination of health and wealth right there.

By creating cleaner eating habits and buying less processed and prepared food, you’re paying more attention to your body and its health. The King of Swords indicates that you knew this all along, and once you listened to your impartial mind, you knew the answer. Tarot just called you out because you couldn’t do that for yourself.

The message in this sample reading is clear-- create more balance in your life by treating your physical body better in ways that you know will work.

Let’s try another one.

Example: You’ve just been in a car accident that you caused by taking your eyes off the road for a second to click “send” on a voice-to-text message. You want to know what will happen next. So you shuffle the deck and land:

Looks like you’re going to have to face the music on a few scores here, Buttercup, and it’ll cost you. You’ve been indulging in dangerous driving behavior when you knew better, and now it’s caused an accident. You need to give that up, and stop deluding yourself that taking your eyes off the road “just for a second” isn’t going to hurt anyone. And now Justice will be served, because your insurance will go through the roof, you’ll have points on your license, and now you can’t even use your license because your car needs to be repaired or replaced.

We hope that you’ve been enjoying this series of major arcana deep-dives. What card would you like to see next?