What Else is Happening Besides Coronavirus? 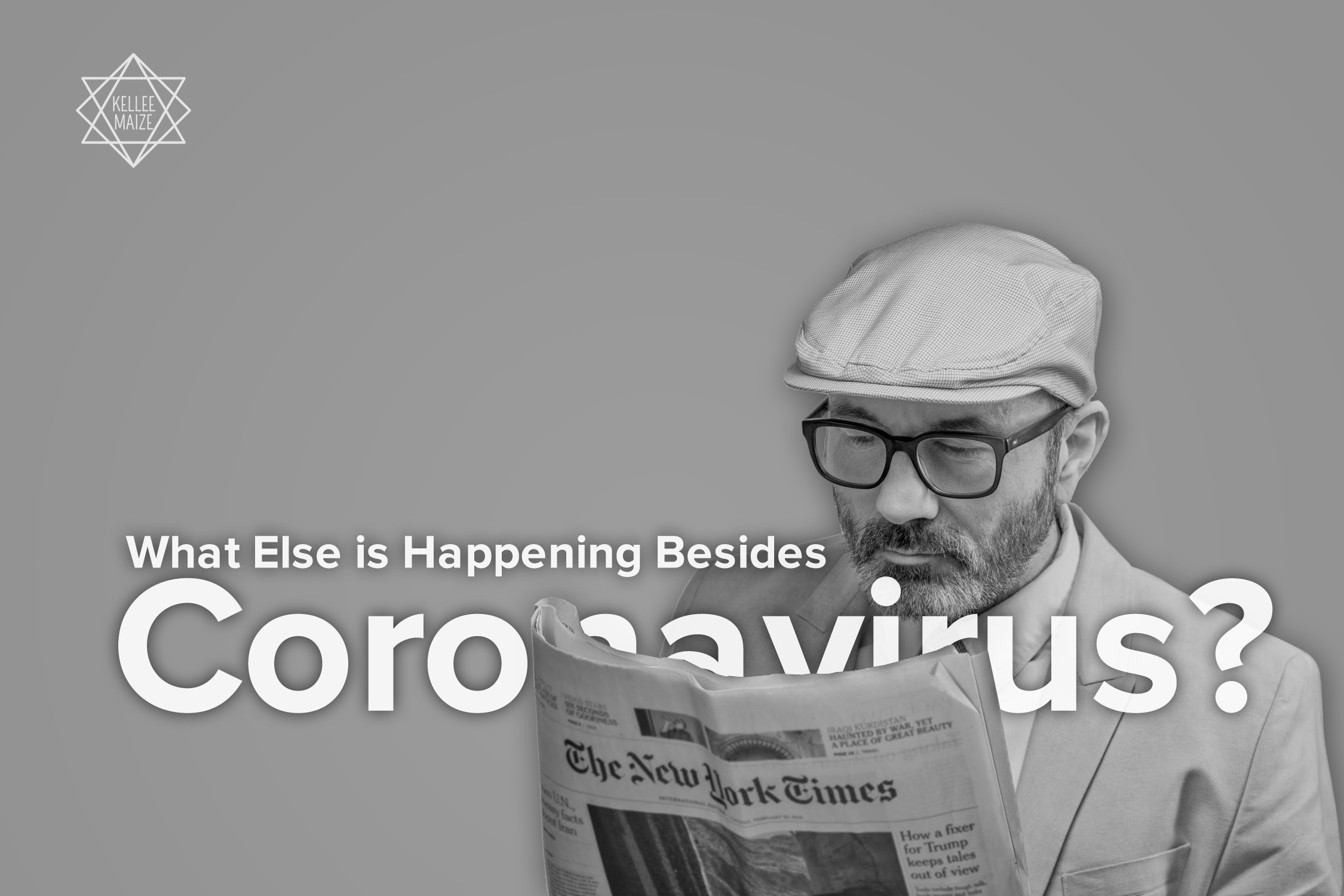 The Covid-19 pandemic has taken the spotlight and occupied a majority of news sources’ attention. On one hand this is important for keeping the public up-to-date on the state of the pandemic in regards to health and economics. On the other hand, coronavirus is not the only thing going on in the world. To take your mind off the pandemic while in quarantine, here are a few other news stories being pushed to the side.

The Cure for Genetic Blindness

The CRISPR Treatment to Revolutionize Medicine

For the first time ever, the CRISPR treatment has been injected into a genetically blind patient. CRISPR is a revolutionary treatment using the protein, Cas9, which edits DNA. The best part is it can be done while the patient is still alive and allows doctors to alter their DNA on an incredibly specific level. While CRISPR has been around for a while now, previously it had only been used to treat cancer and Sickle Cell Disease by removing cells and using CRISPR, then injecting it back into the body. In this new treatment, CRISPR will work within the body and overtime restore vision in patients with genetic blindness. This incredible treatment could not only spell the end of genetic blindness, but also change the entire medical industry with a simple treatment for genetic defects.

Offshore Bank Accounts in the Monarchy

Former king Juan Carlos Alfonso was caught smuggling 1.2 million euros to a secret account in Panama in order to set up a ski resort and luxurious mansion love nest with his mistress in Switzerland. His own son had shared the news about the Swiss bank account. Following this, the Spanish courts arranged to cut off his salary. His son Felipe, current king of Spain, has financially separated from his father amid scandal and vowed to “preserve the prestige” of the Spanish monarchy. It is unclear if Juan Carlos Alfonso will face any legal ramifications.

The EARN IT bill

The End to Encryption

This bill had its first hearing today. Despite remaining foreign to news coverage, this bill has implications that affect every American. The bill proposes that any website that does not follow the list of “best practices” will be stripped of their section 230 protections. These protections stop any blog host from being held liable for their users' posts. Without these protections, websites would be held accountable for the posts their users make, meaning they could be sued for offensive or slanderous material. In addition, the list of “best practices” includes zero end to end encryption and access to any digital message sent. The implications of this are worrying. EARN IT essentially strong arms websites into providing its users digital messages to the government for scanning by either forcing them to cooperate or stripping the site of its protections that allow it to operate without being sued out of existence. This means that the government will have full access to any digital message and the ability to scan its contents for language that raises red flags.

Croatia’s capital Zagreb has been hit by a 5.4 magnitude earthquake, killing 26 people. The area had not experienced an earthquake of similar magnitude for 140 years. Zagreb’s famous cathedral has taken major damage as well, the southern tower fell from a height that once marked Croatia’s tallest building. In addition to this, 63 educational facilities and most museums have been destroyed by the quake. Zagreb’s issues begin to mount as the earthquake has made containing the coronavirus especially difficult. The capital struggles to relocate displaced victims while the city lockdowns to mitigate its growing infection numbers.

In 2018 a series of cyclones from the Indian Ocean hit an area of the Arabian Peninsula, causing increased rain and flooding along with ideal conditions for locusts to breed. When a second cyclone hit during a period of their breeding cycle in which most locusts dry out and die off, the population exploded creating swarms three times the size of New York. The locusts have stormed South African crops in order to feed their massive numbers, threatening South Africa with a devastating food shortage.

Capping off all this bad news, here’s something nice. A naked eye comet will appear in the northern hemisphere in April. While the comet has the possibility of breaking up as it passes the sun and arrives closer to earth, there is a good chance if you track it and look out at the right time you might be able to catch a glimpse. Binoculars are recommended.

Which Zodiac Sign is the Strongest?
Curious to know what the strongest signs of the zodiac are? Keep reading!
Read More >>
How to Figure Out What Tarot Card You Are
Ever ask the question “what tarot card am I”? Well there’s a couple of ways to figure it out!
Read More >>
Which Zodiac Sign is The Meanest? (and How to Avoid Ticking Them Off)
Which zodiac sign do you think is the meanest out of them all?
Read More >>
How Do You Activate Chakra Stones?
You can easily activate chakra stones to help bring balance to your chakras!
Read More >>
Do You Know What Zodiac Sign is the Smartest?
Think you know which zodiac sign is the smartest, think again!
Read More >>
How to Make Your Own Tarot Cards in 4 Easy Steps
Channel your creativity and make your own tarot deck!
Read More >>
What Are the 7 Chakra Stones?
Learn which stones can help amplify and heal each of the seven chakras
Read More >>
Why (and How) You Should Cleanse Your Tarot Cards
Curious to know a little more about why you should cleanse your tarot cards? Want to know the most effective ways to cleanse them? Keep reading!
Read More >>
Good Things Are Coming: Understanding the Page of Cups
How to interpret the Page of Cups when it comes up in a tarot reading, and how it may interact with the other cards that you pull.
Read More >>
New Beginnings and Inspiration: Interpreting the Page of Pentacles Tarot Card
Understanding the history & meaning of the Page of Pentacles’ determination
Read More >>
What is The Page of Swords Tarot Card?
The changing energies are heavy as we approach the New Year. This card calls you to enlightenment of your worth.
Read More >>
How to Set Up A Samhain Altar
Samhain is a Pagan holiday that honors the cycle of life and death with the primary focus of honoring the harvest season, transformation, regeneration, the calling of spirits and honoring the dead. Celebrate by creating an altar to honor the dead.
Read More >>
Questions to Ask the Tarot Cards About Your Career
Whether you’re looking to change your line of work, or wanting to move further in your current career, a tarot card reading may give you the answers you’re looking for.
Read More >>
Why Thrifting is Better Than Fast Fashion
Fast fashion brands are killing the planet and hurting their workers
Read More >>
Top 6 Benefits of Daily Horoscope Reading
Horoscopes can be calculated by an astrologer based on a person's sun sign and the planets’ position. These astrology readings vary in each of the 12 zodiac signs, as their birth dates are different. While the predictions won't always be the same for everybody, they can still help anyone. These forecasts about the future are fascinating guides that can benefit the readers in so many ways.
Read More >>
What’s the Difference Between Halloween and Samhain?
As one of the oldest recognized holidays celebrated around the world, Halloween has been around for centuries. But have you ever wondered when and why it all started?
Read More >>
Questions to Ask the Tarot Cards About Love
Curious about the direction your love life is headed in? Here are some questions to ask the tarot cards and find out.
Read More >>
Tarot Card Questions to Ask About the Self
Questions to ask your deck, a brief history of tarot, and different tarot spreads
Read More >>
#WitchTok Accounts You Need to be Following This Fall
10 accounts that emanate perfect fall vibes, while also teaching you everything you want to know about witchcraft
Read More >>
Thrifting in Pittsburgh: Where To Go, and What To Look For
Thrifting Spots To Check Out and How To Build A Makeshift Fit
Read More >>