Fish are friends, not food. Find an alternative that works for you! 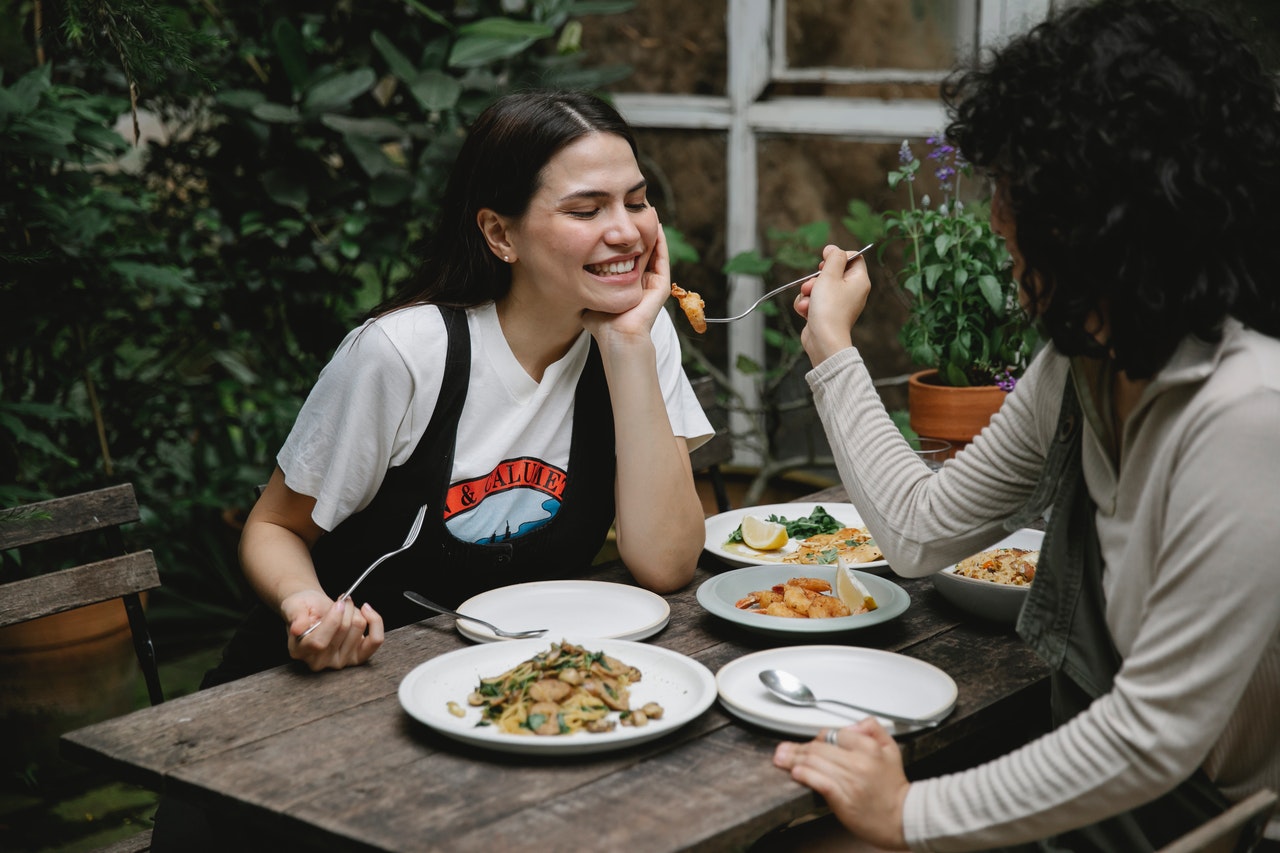 It’s no secret that our oceans are in a dire state of disarray. From pollution to over-fishing, it’s clear that the oceans need our help. While ditching plastic straws and grabbing your reusable shopping bags reduce your carbon footprint, experts agree that the most effective way to help our oceans (and our friends who live there) is to cut back on fish consumption.

Luckily, with the increasing popularity of veganism, there’s no shortage of plant-based options available to satisfy your seafood cravings. This article will guide you through fish-free options at home, from the store, and at restaurants!

How can I Make Easy, Great-Tasting Fish-less Meals at Home?

“Fishy” isn’t always the first word you want to hear when talking about anything other than fish. But, there are so many vegetables out there that have the potential to get fishy! Vegetables with mild flavors and the right texture are only a few steps away from being the perfect seafood alternative!

Mushrooms are a vegan’s best friend for a reason. They come in a variety of shapes, sizes, textures, and flavors, so there’s almost always a mushroom out there that fits what you’re looking for.

The most common varieties of mushrooms are found at almost all grocery stores. However, more specific types of mushrooms might require a trip to your local health foods store or even an online order.

When it comes to mushrooms that can taste like fish, two varieties stand out the most: Oyster Mushrooms and Lobster Mushrooms. They are so reminiscent of seafood that they’re named after them!

When sliced, pearl oyster mushrooms are great in vegan fish tacos. They easily replicate the fishy taste and texture of traditional fish tacos! They can also be made into vegan fish fillets that work well for sandwiches.

King oyster mushrooms can be chopped into vegan scallops! The mushroom’s stems mimic scallops’ taste, texture, and look. They can also be sliced and made into vegan fried calamari. Unlike real calamari, this vegan option gives you the flavor and feel of fried calamari without the rubbery texture that’s common in the real thing.

Lobster mushrooms, on the other hand, are slightly harder to come by. They resemble the look, color, texture, and flavor of lobster-- all without the fish! Lobster mushrooms are an easy substitute in lobster rolls, lobster mac n’ cheese, or seafood pasta. If you can’t find lobster mushrooms at a store near you, they’re super easy to buy online both fresh or dried.

Root vegetables are known for their mild flavors and standard textures-- this makes them the perfect base for vegan fish recipes. Carrots and celery root are easily accessible root vegetables that, with a little help, can replicate some fish staples you love.

Bagels and lox don’t have to come with all the baggage that salmon carries. All of the environmental injustice associated with both farmed and wild salmon, as well as the negative health effects from ingesting pollutants and microplastics can be replaced with carrots! Yes, carrots.

When boiled, sliced, and marinated, carrots make a fantastic homemade vegan lox alternative! All you need is a little vegan cream cheese and some bagels (gluten-free if that’s your thing), and you have a brunch staple that feels as good as it tastes.

If you’re itching for a more general smoked salmon flavor that works well in sushi, on salads, or on sandwiches, the carrots can be prepared slightly differently to better match what you’re looking for!

Celery root is an extremely underestimated root vegetable! A close cousin of the green celery stalks commonly found in grocery stores or as a side to buffalo wings, celery root is often roasted, blanched, mashed, or found in soups and casseroles in South America. However, with the right preparation, Celery Root can be transformed into a fish-less meal!

Out of the Box Vegan Fish Alternatives

Every day, more and more people are experimenting with and sharing new vegan alternatives to comfort foods they miss. Sometimes, these vegan foods may seem out-there, but don’t knock it ‘till you try it! These unexpected ingredients could be the answer to the vegan fish substitutes you’ve been looking for.

Poke Bowls-- a Hawaiian comfort food whose star ingredient is raw fish-- are becoming increasingly more popular in the continental U.S.. However, vegans and those looking to cut back on their fish intake can still enjoy a fish-less version of Poke with watermelon!

After the watermelon is cut into bite-size cubes and marinated, it quickly takes on the flavor and freshness of traditional Poke. When served with rice, cucumber, avocado, and sriracha mayo, the watermelon becomes the star of a vegan poke bowl.

While watermelon fish may make you skeptical, 93% of reviewers would make the recipe again, and it was 4.7 stars from almost a hundred and fifty reviews.

Banana Blossoms are just what they sound like-- flowers from banana trees! They’re usually found at the end of a bunch. They may not be the prettiest flower, but Banana Blossoms are a good source of protein, carbohydrates, and fiber. You can find them canned or jarred at your local Asian grocery store.

Chickpeas are good for more than just hummus! Packed full of plant-based protein, fiber, and magnesium, garbanzos make an excellent replacement for fish! They’re cheap, easily accessible, and have a long shelf life-- making them the perfect ingredient to have on hand.

When you’re craving tuna salad, but want to opt for a fish-free version, chickpeas have your back. Roughly mash the chickpeas, mix with mayo, red onion, and celery, and season, and you’re all set.

Seasonings to Help Put the Fish Back in Fish-less

You still want your fish-free food to taste like fish! Some basic seasonings and sauces to have on hand when cooking vegan fish alternatives are:

When it comes to making plants taste like fish, seaweed is a go-to! Usually, the thought of eating and cooking with seaweed might seem odd to someone who has never done it before. However, “seaweed” is an umbrella term used for any plants that grow underwater. There are many different types that are grown and sold in different forms. Nori, furikake, and powdered kelp are all extremely common seaweed or seaweed by-products that are wildly available in the U.S. and will instantly add the ocean into your fish-free dish.

Soy sauce is a great source of salt for any vegan fish alternative! Liquid aminos or coconut aminos are great alternatives for anyone with gluten or soy sensitivities. Soy sauce is an effective addition to marinades or dipping sauces to easily add that fishy feel you’re looking for.

There’s a reason Old Bay is a seafood staple-- if it ain’t broke, don’t fix it! Just because you’re ditching the fish, doesn’t mean you have to ditch the seasonings too. If you want your plants to taste like fish, season them like fish!

Just like real fish, lemon and vegan fish are a natural pairing. Especially in fried food, lemon is a great way to add brightness and cut through any saltiness or heaviness. Just finish the dish with a bit of lemon juice on top, or add it to sauces and marinades.

Vegan mayo is a great base for dipping sauces! Use it as the main ingredient in vegan tartar sauce, horseradish sauce, sriracha mayo, or anything else that usually calls for mayonnaise.

5 Fantastic Store Bought Vegan Fish Replacements You Have to Try

With the increasing popularity of meatless options, the plant-based section of the freezer aisle is growing. Whether you’re a seasoned vegan or an omnivore looking to explore fish-free alternatives, here are a few solid options to try!

Gardein is a tried and true brand for vegans and vegetarians for a reason! These Fishless Filets mimic the taste and flakiness of real fish-- without the hassle of making it yourself. Certified vegan, kosher, and dairy-free, make sure to pick up some Fishless Filets the next time you’re at the store!

Just like #1, Gardein has your back for store-bought fish-free alternatives! Their Mini Crabless Cakes are made from wheat and soy protein to replicate the real thing. Heat them up on the stove, in the oven, or even in an air fryer!

Just because you want to cut back on fish, doesn’t mean you don’t deserve to treat yourself! This seaweed-based caviar gives you the look, taste, and texture of caviar-- all without the fish. Made without gluten, soy, or any animal byproducts, Caviart comes in both black seaweed and orange seaweed flavors.

Good Catch makes a shelf-stable vegan fish alternative! Perfect for salads, casseroles, or in cakes, this fishless tuna is made from soy protein. Good Catch can usually be found at your local health foods store and is a great fish-free option to keep in your pantry.

If you’re trying to do your part to help the planet by going fish-free, there’s no need to feel left out the next time your friends grab sushi! There are so many fishless and vegan options you can try during your next sushi run!

Creamy avocado wrapped in rice and seaweed paper is a super common and delicious sushi roll found at most sushi places. Pair with sriracha mayo, pickled ginger, wasabi, or soy sauce, to feel like you’re eating the real thing.

If you’re looking for something crisper or fresher than an avocado roll, ask for a cucumber roll! Called kappa maki in Japanese, cucumber rolls are extremely popular in Japan.

While not technically sushi, vegetable tempura is a fish-free option found on most sushi menus. Vegetables like mushrooms, squash, and eggplant are fried in a light batter and commonly served with soy sauce.

Inari Sushi are pockets made of seasoned tofu stuffed with sushi rice and sometimes seaweed. It’s fun and easy to eat. Inari sushi is a comfort food for many people from Japan and is a great option for those looking for sushi without fish!

Kampyo is a type of gourd that is often dried and rehydrated in a flavorful stock. It can be found either in addition to fish in sushi or by itself. Kampyo Rolls are pieces of Kampyo wrapped in sushi rice and nori paper. Kampyo Rolls are a great fish-free option for those with gluten or soy sensitivities!

Trying vegan fish may seem scary at first, but there are so many incredible and innovative options out there! Just remember, every time you opt for a plant-based fish alternative, you’re helping to keep fish in the ocean-- and pollution out.