NBC News’ chief White House correspondent and her husband, John Hughes, are expecting the birth of their daughter in June. 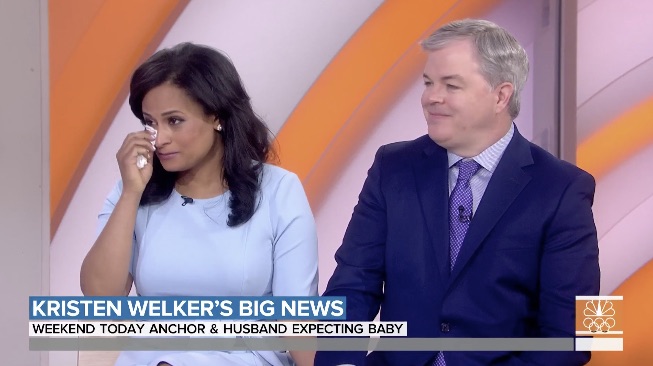 Immediately after marrying Hughes in 2017,  the pair began trying for a baby. After struggling to get pregnant, Welker sought help from a fertility specialist, who recommended in vitro fertilization (IVF). Though the first round of IVF went smoothly, Welker was hit with heartbreaking news: the lining of her uterus was too thin to carry a child.

After two years of constant tests, doctors appointments, and heartbreak, Welker accepted she would not be able to carry a child herself. Still determined to start a family, the couple explored their options.

After much careful research, Welker and Hughes found an answer: surrogacy.

For those who cannot physically have children, surrogacy offers parents an opportunity to grow their family another way. When a woman carries a child in her uterus on behalf of another couple, she becomes a surrogate.

Gestational surrogacy involves fertilizing the egg of the intended mother in a lab through IVF, then implanting the embryo in the surrogate. This way, the child is biologically related to the intended parents.

Another option is traditional surrogacy, where the surrogate is also the child’s biological mother. This, however, may lead to potential legal complications.

Welker and Hughes’ announced the pregnancy during April 23rd’s episode of TODAY, a nod to National Infertility Awareness Week. Their news was met with a thunderous applause from cast and crew.

Welker’s letter was published later that day, addressed to her unborn daughter. She writes, “...I cannot wait until the moment I hold you for the very first time - it is all I have dreamed about for years.”

The newscaster went on to describe the pain of infertility, writing that she “...cried so many tears that [she] didn’t think they would ever stop.” Welker spoke of the loneliness and sadness she felt, a sentiment shared by many who cannot carry a child of their own. Welker shares that the couple visited four doctors in that time, hoping the newest doctor would discover something the others had missed.

The letter’s tone shifted quickly to hopefulness and elation as Welker explained the surrogacy process. Welker has been vocal about the special relationship between the two women since the announcement, referring to the surrogate as “...a special helper who has turned into [their] hero.”

Welker ends the note with a reminder: “...while I didn’t carry you in my body, I have always carried you in my heart and I will always be your mommy.”

Like many women, Welker experienced hopelessness and grief following the news that she could not carry a child. Amy Beckley, a scientist, explains that prolonged feelings of grief are to be expected: “if you could just turn it off like a light switch, I think that might not be normal. It’s an ongoing thing that people think about.”

‍Welker took to Twitter to describe the process, stating, “Going through this process, I learned how difficult and isolating infertility struggles can be for hopeful parents. That’s why we opened up about our years-long journey to parenthood.”

Though miscarriage is more common than most think - one-in-four women experience a miscarriage during their lifetime - many are unlikely or unwilling to talk about it. When celebrities like Welker are open about their fertility struggles, it welcomes conversation and normalizes an event so many must endure.

We’re wishing Kristen Welker and John Hughes the absolute best on their quest to become parents.  The pair’s child is expected to come sometime in June.