How to be an LGBTQ Ally

How you can support the LGBTQ community in your life 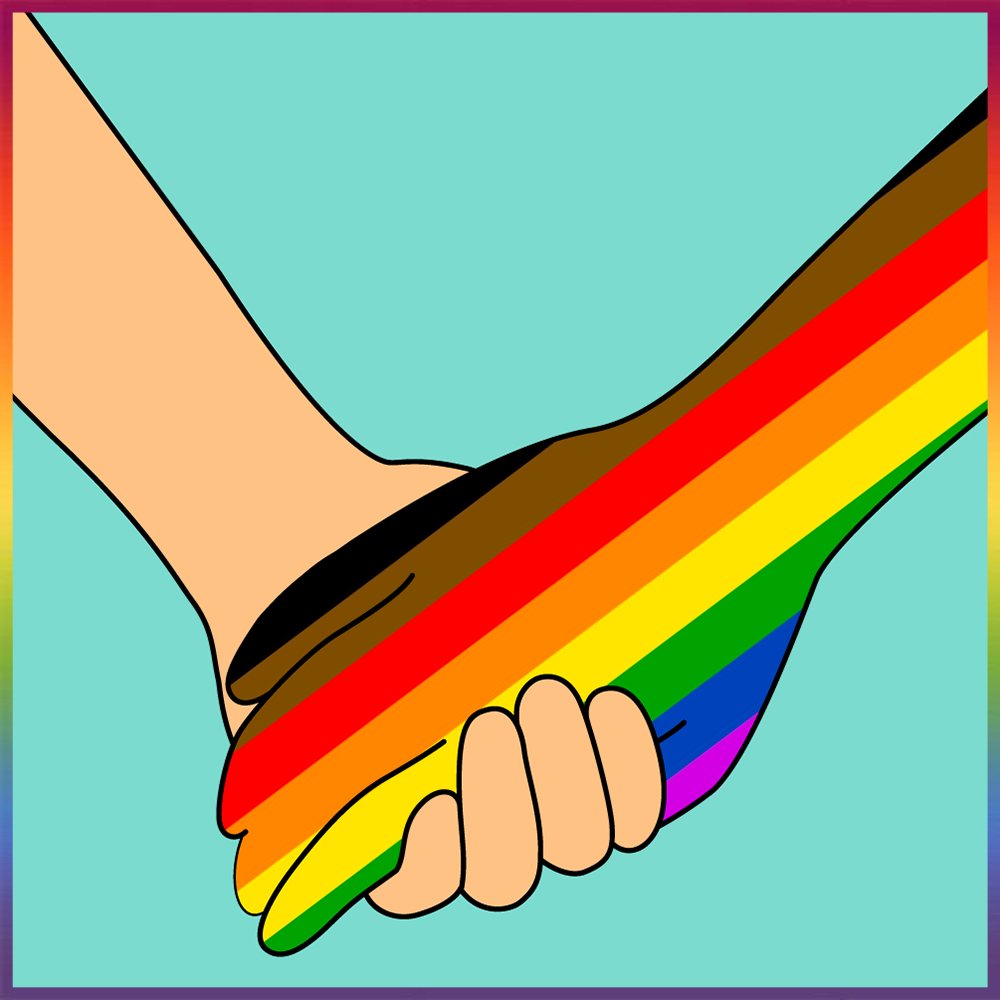 Believe it or not, this year’s Pride Month is coming up in June, and if you haven’t already gotten a headstart on the festivities, now is the perfect time to start educating yourself on issues related to the LGBTQ community—so you can be a better ally any month of the year! Read on to find out more!

LGBTQ stands for lesbian, gay, bisexual, transgender, and queer, and it’s an acronym that intends to encompass the wide varieties of sexual orientations, identities, and atraction that people experience. Basically, it consists of anyone who isn’t cisgender and heterosexual.

The history of LGBTQ rights in the United States is typically traced back to the Stonewall riots of 1969, which were spontaneous demonstrations by LGBTQ people at the Stonewall Inn in response to a police raid. These efforts were spearheaded by activists such as Marsha P. Johnson, a Black drag queen and gay rights advocate, and Slyvia Rivera, a trans Latina woman. The two then went on to found the mutual aid organization, STAR, to help trans sex workers and queer youth in New York.

Even in the rare cases when it is talked about, the history and culture of the LGBTQ community tends to be white-washed and conversations often center around the experiences of white queer people, ignoring the unique issues that queer people of color face as a result of the intersection of their identities. Erasing the contributions that so many queer people of color have made to the movement is erasing history, and it’s important to value the challenges and experiences that minority identities within the LGBTQ community face.

These terms may sound unfamiliar, but chances are, you’ve seen them in action. Performative activism is when individuals try to act or appear invested in certain social justice causes in order to seem like better people and increase their social status. This has been seen especially on social media recently, with many people adding BLM to their Instagram bios or using Twitter hashtags (referred to as hashtag activism) to spread the word about a cause. Although these aren’t inherently performative behaviors, they usually aren’t supported by concrete actions, such as signing petitions, contacting elected officials, attending demonstrations, or even just having real-life conversations about social issues.

Many people use their social media persona to manipulate people’s image of them, and may be entirely comfortable typing out #TransLivesMatter on Twitter while also casually using slurs against them and exhibiting transphobic behavior in real life.

On the other hand, rainbow capitalism is when corporations target the queer community to buy their products, especially during Pride Month in June. Every year, without question, most major brands will change their profile picture to have some variation of rainbows in it. They’ll release specific pride merchandise and offer sales and discounts, and the second the month ends, they’ll move on to 4th of July merchandise. If not sooner.

Rainbow capitalism is pretty much like performative activism but on a larger scale. When corporations do these frivolous things such to cater towards the queer community during a month that’s supposed to be about celebrating them, not exploiting them, they continue to mistreat LGBTQ workers and continue homophobic and transphobic practices that don’t aim to empower or uplift the LGBTQ community in any way.

How you can be an ally

First things first, don’t be a performative activist or actively participate in rainbow capitalism. Try to find small ways to support queer people, whether that’s by donating to organizations that help LGBTQ people, volunteering at shelters, or starting conversations about LGBTQ rights and equality.

It’s also important to stand up for what you believe in, even if it may be an unpopular opinion. It’s definitely easier said than done, but if you’re hanging out with your boys and one of them drops a homophobic slur (or a slur of any kind, for that matter), don’t be afraid to call them out on it. Words have power, and there’s a lot of history and negative connotations around slurs that have been used against queer people for years. Although many LGBTQ people choose to reclaim these slurs, it’s up to them whether to use them or not.

Another easy way to be an ally is just to pay more attention to the way that you think and speak. Often we don’t even realize how harmful or biased our thoughts may be! A lot of us tend to assume that everyone around us is just like us, and for most people, that means that they assume that everyone in the room is straight and cis, just like them. However, that isn’t always the case, so it’s important to keep your mind clear of any assumptions or classify people according to stereotypes and judgements like “oh, she looks like such a lesbian” or “he’s acting so gay.” These only continue to stigmatize LGBTQ identities and are harmful to the community.

You should also consider reevaluating the gendered language you may be using in your life. People tend to assign genders even to inanimate objects, which is seen when people refer to ships as “she,” and this reinforces the (false) gender binary by imposing it on… objects? Overall, it’s harmful and weird, and so is saying things like “he’ll be such a ladies’ man when he’s older” or “you’ll make such a good wife to your husband someday.” Instead of imposing stereotypes and norms on people, especially kids and teenagers, it’s important to just let people grow, change, and figure things out.

6 Sustainable Pet Brands that You, Your Pup, & the Planet Will Love
Eco-friendly Living isn’t Just for your Two-legged Friends, anymore!
Read More >>
Opening the Solar Plexus with Yoga
Learn to unblock the Solar Plexus Chakra through yoga poses
Read More >>
Top 5 Ways To Spend Your Anniversary
Read More >>
The Ten of Wands: A Guide to Demystifying the Tarot Card of Burden
Learn All About the Meaning of the Ten of Wands Tarot Card!
Read More >>
Ten of Cups Tarot Card Meaning: Unveiling the Path of Your Romantic Journey
Learn About the Meaning of the Ten of Cups
Read More >>
Healthcare Marketing Tips And Strategies From The Pros
Read More >>
How Young Female Rappers Can Gain More Musical Exposure Today
In a genre that is often dominated by men, young female rappers are fighting for their voices to be heard. Despite the challenges they face, these talented artists are determined to make a name for themselves in the music industry. In this blog post, we will discuss how young female rappers can gain more musical exposure today. We will also explore some of the obstacles they have to overcome and offer advice on how to achieve success.
Read More >>
Benefits Of Sleeping In Silk Nightwear
Read More >>
5 Fun Facts About Corgis
Read More >>
Top Ways To Have Fun On A Friday Night At Home With Your Friends
Read More >>
Our Latest Edubirdie Review by Professional Writers
Read More >>
Eco Friendly Music Festivals
Read More >>
6 Things You Need to Do After Buying a House
It is finally the day. You own your very own home. Choose your favorite paint to cover the walls, and maybe knock down one or two.
Read More >>
Decided To Start Your Own Business? Here's What Will Help You
Starting your own business is an exciting proposition, but it's also a daunting one. You're likely to face challenges you never dreamed of, and it can be hard to know where to start. But don't worry - we're here to help. We'll give you a roadmap to starting your own business. We'll cover everything from coming up with a business idea to getting your business off the ground. So if you're ready to take the plunge, read on!
Read More >>
6 Things Women and Girls Need to Know about Personal Injuries and How to Get Help
Read More >>
7 Surprising Kitchen Items to Put in a Chef’s Gift Hamper
Read More >>
Zodiac Signs That Like to Be in an Open Relationship
Read More >>
What Music Suits You The Best According To Your Zodiac Sign
Judging and studying all the characteristics of each zodiac and bringing some of the best genres of music that suit them the most.
Read More >>
What Type Of Student You Are Based On Your Zodiac Sign
The zodiac sign affects many things, including the ability to study and master information. In this article you will learn about the features of each of them.
Read More >>
How to Be An Ally for Diversity
How you can push for diversity, equity, and inclusion in your community
Read More >>