Giving Up the Gills

Why Should We Stop Eating Fish? 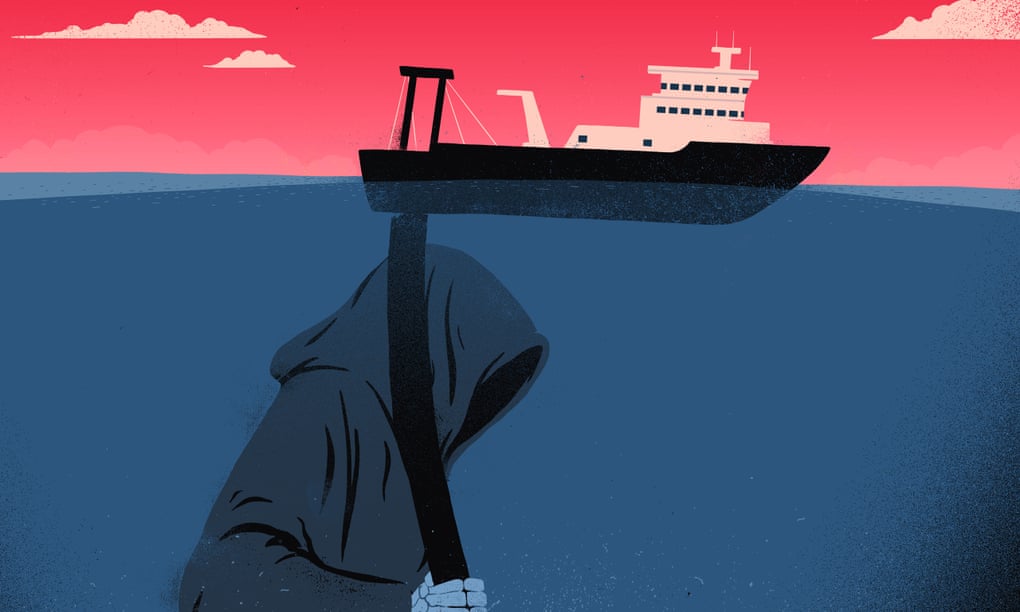 A depiction of commercial fishing killing our oceans. Image courtesy of The Guardian.

Why only name one reason to stop eating fish and seafood, when there’s so many! By consuming the amount of fish that we are, humans are disrupting precious ocean life and contributing to animal cruelty and extinction. There has never been a better time to stop eating fish or switching to a plant based diet in general, it’s 2021!

Reasons to stop eating fish and seafood are listed below:

A school of yellowfin tuna in the ocean. Image courtesy of World Wildlife Fund.

How Fishing is Harmful to Ocean Life

Overfishing: Catching more fish faster than stocks can reproduce is called overfishing. Overfishing is related to bycatch (catching other animals not meant for the catch) and it’s deteriorating marine ecosystems. Many people are working to improve their methods, yet there doesn’t seem to be a clear solution without the stop of commercial fishing, unless we stop eating fish.

Disruption Ocean Ecosystems: When too many fish are taken from their natural environments, it throws the whole ecosystem out of balance. The entire food chain is thrown off and many species are left without sources of food.

There are too many boats in the oceans fishing for fish that are no longer there, they’ve caught them all. Many commercial fishing boats are polluting waterways as well. Many boats use the bottom trawling method to catch fish, where they scrape far below the surface with large nets that damage coral and sponges that have been there for thousands of years. Many species of fish depend on coral reefs and sponges for shelter, food, and protection, yet they are left with nothing. If smaller species of fish cannot survive, larger species will not be able to either. Our ways must be changed, and this is such an important reason to stop eating seafood.

Ever heard that plastic in the ocean is killing ocean life? Yeah, 46 percent of that was found to be discarded fishing nets in The Great Pacific Garbage Patch. This specific garbage patch  is about 79 thousand tons of plastic and waste. Fishing is a major source of ocean pollution and plastic contamination due to discarded and lost fishing material.

Fish Feel Pain: Studies have concluded that fish do in fact feel pain. Despite this conclusion, fish are left out of any rules and regulations about the inhumane treatment they receive when it comes to fishing. Although they don’t react in the same way that humans would, fish have nervous systems that feel pain. When a hook is attached to and ripped from their mouths, they feel every second.

New studies have shown that fish have the emotion of fear that goes beyond a simple reflex. They have illustrated fear when they are flopping around gasping for air when they are caught. They fight for their lives when they are caught on a hook or in a net. Along with fear they feel stress. Farmed fish experience hyper-confinement through their lives trapped into an overcrowded enclosure, causing them routine stress. Think about all of the inhumane treatment fish go through when you are craving your next seafood dish.

Fish Farming and the Harm It Causes

What is Really Going on in Fish Farms?

Unless you are catching seafood you are eating yourself or asking all the right questions, chances are you are eating farmed seafood or fish. Farmed fish now accounts for 50 percent of all fish eaten in the United States. Farmed fishing is deemed the solution to meeting the world’s demanding need to consume seafood. Aqua farms or fish farms are overcrowded, man made enclosures or large netted areas in bodies of water and fish like salmon, tuna, halibut, and cod commonly spend their whole lives in these enclosures. Take a look at the long term effects of aquafarms for humans, fish, and other animals.

Farmed Fish- Not as Nutritious as You’d Think: Fish are only as nutritious as their own diets, and commonly fish in aquafarms are fed corn or soy. For example, fish is said to be high in omega-3 fatty acids, but if they are fed corn, soy or other vegetables, they will not be as high in these fatty acids when consumed. A farmed fish is likely to be higher in saturated fat with this type of diet.

The Impact on Other Species: Tuna and salmon need to eat up to five pounds of fish per pound of body weight, and fish farming (with an overpopulation of these types of fish) are pushing species like herring and anchovy to the point of extinction. The same goes for bigger sea life such as dolphins, sharks, and whales that prey on smaller species of fish that have been caught in these farm enclosures. If the cycle continues, sea life will not be able to survive.

The Spread of Diseases: Aquafarms are full of fish that live in dense, dirty pens that pollute the surrounding waters. These fish often become diseased and it is spread to other fish in the enclosures. Diseases are often treated with antibiotics and pesticides- this is half of the fish that humans are eating today. In their netted environments, often fish escape and introduce these diseases and toxic pollutants to other fish as well.

Because of the large amount of fish in these small enclosures or netted areas, large amounts of fish excrement is causing surrounded water to become extremely polluted and leads to poor water quality love in oxygen. Roughly 2 million salmon escape from aquafarms in the North Pacific alone a year, introducing disease to many other species.

Antibiotics and chemicals used on these fish also damage local ecosystems humans may not yet even understand.

Eating Plant Based, You Can Do It!

Benefits and Alternatives to Cutting Out Fish and Going Plant Based

Plant Based Diet: Have you ever thought about eating a plant based diet? It’s 2021, and there are so many alternatives to eating meat, and fish especially. An extremely important benefit of eating plant based is cutting down on human’s environmental impact. Many celebrities like Beyonce and Tom Brady follow a plant based diet, so why can’t we?

There are many different plant based diets to follow like vegetarian, vegan, raw vegan, or flexitarian. Vegetarian and vegan are types of diet we hear often, in addition to vegan, raw vegan is only eating raw, plant based foods. If you’re not totally sold on being completely vegetarian or vegan, a flexitarian diet may be the one for you. It is a diet that mainly consists of plants and plant based foods, along with some animal products here and there.

Health Benefits: Interestingly, a plant based diet does contribute to many increased health benefits. Lowered blood pressure being one of them. Studies have shown that a vegetarian diet reduced your risk for high blood pressure up to 34 percent.

Heart Disease and Type 2 Diabetes: Since meat contains a high content of saturated fat, which contributes to heart problems, eating plant based reduced those risks greatly. Following a plant based diet has been shown to reduce the chances of heart disease by 16 percent and dying from a heart condition by 31 percent! Limiting the intake of meat and fish can not only help your heart, but studies have also shown that it can help prevent type 2 diabetes. Plant based diets keep your cholesterol down.

Weight Loss: While the number one goal here may not be to lose weight, many people who make the swap to plant based have seen a drop in the scale. Adults who switch to a plant based diet on average lose 9.24 pounds. The fruits and vegetables that are eaten take longer to digest, which is burning for calories and contributes to weight loss. Not to mention all of the nutrients plant based diet brings to the body.

Life Longevity: You guessed it, a plant based diet long term may help you live longer! A study done by the Journal of American Heart Association concluded that by eating plant based, people can lower their risk of all causes of mortality by 25 percent.

Alternatives to Eating Fish: Phasing seafood out of your diet is simpler than ever before with so many vegan fish products. Gardein and Sophie’s Kitchen has great vegan fish filets, crab cakes, shrimp, scallops, salmon, and toona.

Tessa Mlinek is a student at Seton Hill University from Greensburg, PA.
See All Posts >>