Although 12 American states offer cannabis for adult use, marijuana based businesses encounter difficulty acquiring banking services. This leaves most operating on a cash only basis, with troublesome amounts of cash making them targets for robberies. Innovative cannabis cryptocurrencies now give these dispensaries the option to store their money digitally. 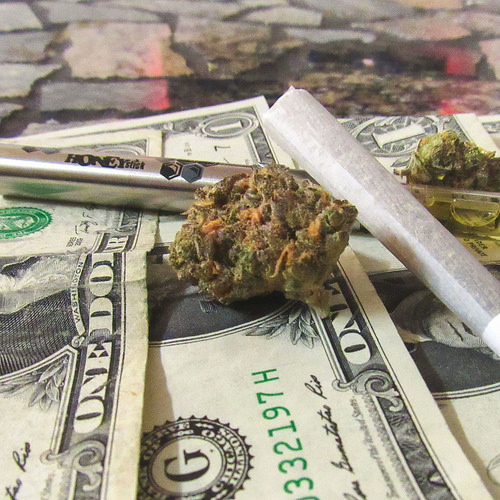 The North American cannabis market has swelled to nearly $10 Billion dollars in the last year, but most of the money spent on cannabis cannot be banked by American marijuana businesses due to federal prohibition. To solve this, Innovative crypto currencies have partnered with marijuana businesses to provide a safer means then cash only transactions.

The U.S. produces quite a lot of cannabis, especially at the present, with at least 47 states offering some form of legal marijuana for medicine, and 11 with full adult use legalization. The golden state of cannabis, sunny California, first legalized pot for medicine back in 1996, and has been on the forefront of the industry ever since.

According to Mother Jones, America produced 22 million pounds of cannabis in 2014. Washington, Hawaii, Tennessee, Kentucky, and most notably California accounted for 80% of these, or 17.6 million pounds. The Emerald Triangle, made up of California’s Humboldt, Mendocino, and Trinity counties, is perhaps the mecca of the American cannabis industry.

On average, the Emerald Triangle produces 1.7 million pounds of cannabis per year, acting as America’s number one domestic supplier. Following the advent of adult use legalization, California saw $2.4 billion dollars in cannabis related revenue in 2018. Although down from last year, California’s black market cannabis accounted for an additional $3.7 billion dollars, according to Forbes.

The Need for Cannabis Banking Services

Federal cannabis prohibition means most dispensaries and producers must conduct all their business on a cash only basis. Cash only operations can be inefficient, make cannabis businesses targets for robbery, and overall limit the potential of this fast growing industry.

Pictured in the graph above, the economic impact of the American cannabis market as a whole may bubble to nearly $75 billion dollars in size in only three short years. While this rapid growth should encourage future cannabis business owners, at present many find themselves in a tough situation where they have a large amount of money, but nowhere to put it.

In Massachusetts, one of the newest recreational cannabis markets, cash only purchases still reign supreme due to inadequate access to banking services. Since the federal government regulates and insures most banks and credit unions, federal marijuana prohibition means marijuana bank accounts could potentially be seized, and banks could face legal action.

The dilemma, according to the American Banking Association, is that marijuana transactions managed by banks technically count as money laundering under Federal law, despite cannabis’ growing popularity and legality. They believe that, “The growing number of states that allow [cannabis’] sale and use raises practical issues that must be addressed.”

Of these practical issues, the cash only nature federal prohibition requires may make cannabis dispensaries prime targets for robberies. Moreover, without access to banking, cannabis businesses miss out on debit/credit transactions, as well as potential Ecommerce sales. Many estimate the cannabis market overall would grow substantially if banking restrictions are lifted.

The cannabis banking problem has become so big that American legislatures are actually actively working to try to solve it. The Secure and Fair Enforcement (SAFE) Banking Act, which would protect banks working with marijuana businesses from federal. The House Financial Services Committee will vote on the bill next week.

In 2017, Only 4% of American banking institutions worked with cannabis businesses

The Past and Present of Federal Marijuana Banking

During the later years of the Obama administration, deputy attorney general James M. Cole issued a memo to all American attorneys that gave guidelines for banks working with cannabis businesses. Following Obama’s departure, this memo was repealed, creating further questions for cannabis businesses and banks.

From 2014-2017, A slow, steady growth of bank and credit unions began working with cannabis businesses following the 2013 cole memo, which provided guidance for banks on working with cannabis businesses without violating federal law. However, following the Obama administration, former attorney general Jeff Sessions repealed the Cole memo, with intentions to review the policy for changes.

Even when cannabis banking was on the rise, most banking institutions charged heavy fees to make up for the risk associated with cannabis. For example, a Maryland dispensary reported paying up to $1700 a month in fees. When you only accept cash and pay hefty taxes, costs like these can add up and hurt cannabis businesses bottom line.

Cryptocurrencies have seen increased in prominence dramatically since 2017

Due to federal prohibition, cannabis bank transactions can still be considered money laundering. An innovative cryptocurrency called Stablecoin may help cannabis businesses get around this, and help bank cannabis related funds.

In response, cannabis businesses have begun seeking innovative alternatives to traditional banking altogether, one of which is cryptocurrency. Members of the California state assembly have authored a bill that would allow cannabis businesses to pay their city, state, and county taxes via Stablecoin, a currency dependent on current business assets.

Stablecoin fills the need of a relatively fixed crypto currency, one that would allow cannabis businesses to process their cash revenue faster, and streamline all tax payments. Maker DAO, the innovator of Stablecoin DAI, tested its currency in July of 2018 in coordination with the Tradeshift Cash Solution.

The testing phase worked as such: when receiving a new invoice, business’ using Tradeshift’s platform may convert their invoices into blockchain tokens that can be purchased at a discount using the DAI Stablecoin. Then, the Stablecoins will be converted to fiat currency and stored in the small businesses account.

This provides a roundabout way for cannabis businesses to bank, and it’s got the attention of California cannabis business owners and legislators who want to move forward with their billion dollar industry. In an interview with Markets Media, Liz Prehn, Moskowitz LLP lead tax attorney, outlined the potential benefits cryptocurrency may offers cannabis business.

She described that cryptocurrency is legal, and, unlike cash, it can’t be stolen. “There is nothing illegal about using cryptocurrency,” Prehn said,  “Also, it’s secure. Cryptocurrency’s blockchain technology provides a secure payment and tracking process for cannabis transactions.”

“Secondly,” She continued, “the fees are generally less than 1% and it’s available everywhere. Cryptocurrencies….developed specifically for the marijuana industry, can buy most anything, anywhere in the world.”