BPA-Free: Not Free of Fertility Struggles

You probably paid twelve dollars for your water bottle because it had a “BPA-free” label on it. But recent studies have shown that the replacements for BPA could be just as dangerous, especially to the reproductive systems of women and men. So how do we keep ourselves safe in a world that seems submerged in chemicals? 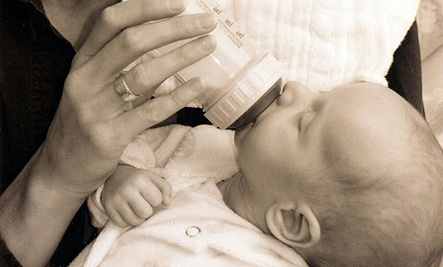 In the past few years, people have paid the premium for safety when it comes to their plastics. But the replacement chemicals used in the production of ‘BPA-free’ baby bottles and food storage containers may not be as safe as we’d like to think. These “regrettable substitutions” may leach out some damaging effects on the fertility of men and women.

What is BPA, and why is everyone freaking out about it?

Bisphenol A (BPA) is the base material for making polycarbonate plastics, which is used in a number of common household items, from canned foods to coffee pots, to grocery store receipts. Leftover BPA that is not consumed in the reaction that takes place to make these plastics leaches into the (often food) product and can be consumed.

There are a number of health concerns related to the consumption of BPA. It has been found to mimic the hormone estrogen, and due to this BPA can bind to estrogen receptors, influencing processes such as cell growth and repair, fetal development and reproduction, and increasing the risk for chronic diseases such as obesity, depression and an increased risk for cancer.

BPA can also cause infertility in women and men, the substance being linked to higher rates of miscarriages in women, lower quality embryo production among couples undergoing in vitro fertilization, and a greater likelihood of low sperm count in men.

The U.S. Food and Drug Administration (FDA) used to say that BPA was safe. But these adverse effects caused them to change their tune. In 2012, after BPA was found to potentially cause harm in the brain development of fetuses and infants, the FDA banned the use of BPA in baby bottles in the U.S. Many canning and plastic container companies followed suit.

Not quite. Unfortunately, many bisphenol replacements for BPA are believed to be just as dangerous as their BPA counterparts. A 2011 study showed that all of the commercially available plastics at the time released estrogen mimicking materials, therefore causing some of the same health concerns as BPA.

These BPA-free products are also showing similar signs of infertility in men and women. A study done at Washington State university found that these products were also leaching out chemicals, damaging the eggs and sperm of mice. The study showed that many BPA-free products, including the common BPS, showed many of the same chromosomal disturbances as BPA had in the past.

And even if the contamination were contained, its effects could linger for three generations.

What can we do then?

If commercially available plastics are not currently available for use, what should we do to protect ourselves as well as our children?

Since these bisphenol type plastics are cheap and flexible to use, they have permeated consumer products. The main source of bisphenol chemicals comes from your diet; however, there are many ways to reduce your exposure.

At the Grocery Store

First and foremost, try to minimize the amount of BPA and BPA-free plastics you come into contact with by buying fresh and frozen foods rather than canned foods. Fresher fruits and vegetables typically contain more nutrients, and frozen foods have those nutrients flash frozen to preserve--it’s a win-win situation.

If you can’t buy it fresh, stick to foods packaged in glass or ceramic containers, or cardboard cartons. Juice boxes are an example of this.

There is also a significant amount of BPA and bisphenol product in thermal receipt papers, so you may consider washing your hands after handling a receipt, or many stores are now offering the option to have your receipt emailed to you, eliminating the plastic contact entirely.

As the FDA only banned the use of BPA in baby bottles in 2012, and the BPA-free movement didn’t really pick up until after that, you’re going to want to replace all pre-2012 baby bottles,sippy cups, water bottles and hard plastic food containers.

Throw away any scratched or cracked containers, as they are more likely to leach out plastic material. Recycle them if possible; otherwise, just pitch them!

Use metal, ceramic or wood dishes and containers for cooking. Plastic chemical waste leaches out into food and liquid more when heat is introduced. Use non-plastic containers for storage as well. It may feel like going backwards in time, but it works!

Invest in some (probably still twelve dollar) stainless steel or glass containers. Here are some  really great stainless steel water bottles--they’re funny and so worth the price.

Keep plastics marked with a 1, 2, or 5: they don’t contain BPA or other hazardous plastic materials. Dispose of plastics labeled with a 7: not all plastics with a 7 use BPA or bisphenol replacement, but it’s hard to tell when they do--better safe than sorry.

Many children’s toys also use BPA and bisphenol substitute--if you are purchasing for a baby that is still in the “eat everything in sight” stage, be mindful of this.

While it is nearly impossible to remove plastics entirely from a twenty-first century household, minimizing your exposure to BPA and BPA-free polycarbonate plastics may really minimize the dangers to your fertility and your overall health.

BPA-free materials often market themselves as “safer” and “greener”, but they aren’t any better. The problem isn’t just the plastics--it’s the lack of regulation. There’s no one charged with the evaluation of these replacement chemicals, so they are not ensured to be any safer.

So far the state and federal government have taken steps to regulate the use of polycarbonate in items such as baby bottles and sippy cups. In 2016, the Toxic Substances Control Act, a 40-year-old law, was finally reformed.

However, it’s not enough. Current EPA leadership is attempting to weaken this reformed law. Here you can tell your Congress to implement this newly reformed law and not to give up on chemical safety.

BPA-free does not equate to safe. So it’s important not only to your fertility but to your overall health that you minimize your exposure and that we all work towards better chemical regulations.