Are Vegetarians Healthier than Meat Eaters?

There is a good chance that eating a plant-based diet is naturally a lot healthier than a diet that includes meat products. 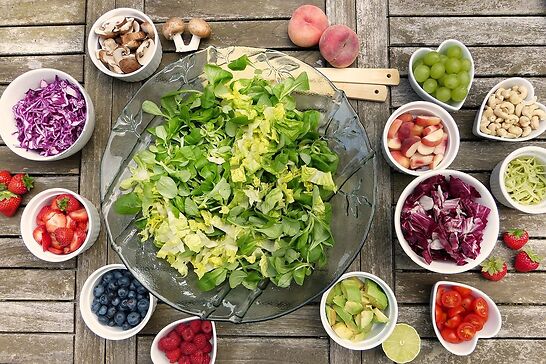 Vegetarian food has a reputation for being healthier than meat inclusive foods. Many people choose vegetarianism for the purpose of becoming healthier. They replace meat with foods that are not considered to be as harmful. Meat is known to be high in cholesterol, which can clog arteries. This includes all types of meat, even white meat that is usually looked at as a healthier option. Processed meats are considered to be carcinogens due to the chemical preservatives used to make them. For many people, processed meats are consumed regularly. Bacon and sausage for instance, are processed meats that are also common breakfast staples. Meat is already high enough in fat and cholesterol, processing tends to add more harmful elements to it.

Vegetables do not share meat’s reputation. Diets rich in fruits and vegetables are said to lower blood pressure and reduce the risk of heart disease. That type of diet is supposed to fix digestive issues and keep your blood sugar in check. It is even said to prevent certain types of cancer! The low glycemic loads of these foods are what help to regulate blood sugar. Fruits and vegetables also have a high fiber content. Fiber helps to regulate blood sugar levels. It also assists with maintaining bowel health and helps to lower cholesterol.

All meat is said to have the ability to cause harm, whether it is processed or not. Claims of this harm have been made throughout the years. Since consuming a lot of meat products can have detrimental effects on a person’s health, it makes sense that eliminating those products from your diet would be thought of as healthier. But is that truly the case or is it just an assumption?

What Are the Effects of a Meat-Based Diet?

A meat-based diet is the most common one in our society.

Many people love meat and cannot imagine living without it. It is usually a central part of the average American dinner. Meat is considered to be the main dish and it is often complemented by a starch and a vegetable side. Some people could not fathom life without it. They may crave it on a regular basis. Even many vegetarians and vegans love meat! (Or at least they used to!) Most people don’t change their diets simply because they hate meat. Oftentimes the things that taste the best to us can be the worst for our bodies. A diet made up of French fries and ice-cream would be a delicious one, but it would not benefit our bodies in the least. Meat is a highly enjoyed food, but it can have some drawbacks. These drawbacks are significant enough to cause some people to give it up entirely.

Meat eating is associated with a number of common ailments in our society. Among those ailments are high cholesterol, diabetes, high blood pressure, and cancer. These illnesses plague many members of our society, and our diets are one reason for it. Heart disease is a top killer for Americans. Meat contains high amounts of cholesterol and saturated fats. Saturated fats are considered to be one of the least healthy fats. It is solid at room temperature. It ends up clogging arteries the more it is consumed, and can lead to heart attacks and strokes.

Studies have found that the more meat a person consumes, the smaller their ventricles happen to be. People who consume higher levels of meat also happen to have stiffer arteries and poorer heart function. Cardiovascular health suffers more and more when meat is consumed in abundance. Red and processed meats are known to be among the worst offenders, but white meat, considered to be more healthy, is also not without blame. Any meat can have harmful effects on the human body, no matter how much healthier it is than processed meats.

Meat eaters can have relatively healthy diets, but the existence of meat in the diet will still have some level of physical effect. Meat eaters have to try much harder than the average vegetarian does to maintain their health. While processed meats have been labeled as carcinogens, as recently as in 2015, unprocessed meats have been labeled as “possible carcinogens.” While that consensus is not exactly clear, it would definitely be the safest choice to avoid something that has the potential to cause cancer. Cancer is one of the most dangerous ailments that plagues our society. It is the cause of many people's demise, and a disease that is best avoided if at all possible.

The prevalence of diseases like cancer, heart disease, and diabetes may have a strong connection to our society’s meat heavy diets. Meat is now consumed in volumes that were once not possible for people. Meat used to be expensive and sparsely eaten. It was not viable for people of the past to have meat on a regular basis. It was treated more like a special treat on occasion. Nowadays, with the existence of factory farming, meat is eaten in ultra high quantities by large segments of our population. It is no coincidence that the prevalence of diseases like high blood pressure, diabetes, and high cholesterol have skyrocketed over the past few decades. Our culture’s extreme reliance on meat has had an awful effect on our health. Even cutting back on meat a little bit can have positive effects on a person. Cutting it out entirely can have further effects.

What are the Effects of a Vegetarian Diet?

Vegetables, often a central part of a vegetarian diet, are not celebrated as much as they deserve to be. Many people paint vegetables as an unfortunate necessity of a good diet, but do not look forward to eating them. We are all used to seeing kids moan and groan when made to eat their veggies. Plenty of adults even refuse to eat them! This is mainly because vegetables are often neglected when served on a plate.

Since most people prioritize meat, they like to focus on their meat entrees, and then throw in some bland vegetables on the side. People then grow to associate vegetables with negative feelings and take no pleasure in consuming them. Vegetarians on the other hand find lots of ways to make delicious vegetables that are as crave worthy as meat! They come up with all kinds of amazing ways to serve their alternative protein sources. That innovation brings about many physical benefits.

Vegetarians aren’t thought to be healthier for no reason. Medical professionals have found vegetarians to have healthier biomarkers than meat eaters. Biomarker is short for “biological marker.” Biomarkers are molecules in the blood that indicate a person’s level of health. Biomarkers can indicate good or bad health, and indicate the level of disease present in a person. It has been found that vegetarians overall have healthier biomarkers. They have less chance of struggling with high cholesterol, high blood pressure, and diabetes among other debilitating illnesses. Vegetarian’s biomarkers were found to be so healthy that even smoking and alcohol consumption did not have too significant of an effect on them. They were still found to be healthier than meat eaters, whether they were smokers and drinkers or not.

Vegetarians show lower levels of 13 significant biomarkers. Those markers include “bad” cholesterol, apolipoprotein, a contributor to cardiovascular disease, AST, which worsens liver function, and creatinine, a cause of deteriorating kidneys. These factors paint a picture that shows how much healthier the average vegetarian tends to be in comparison to meat eaters. But it is not the case that vegetarians show all the best biomarkers. They tend to have low levels of certain good biomarkers which include “good” cholesterol, vitamin D, and calcium. This is where individual vegetarian diets count. Not all vegetarians are very healthy. Pizza is a vegetarian food as long as it's not topped with meat, but it is not at all known for being a healthy food. A vegetarian can very well consist of a diet of pizza, but they will not reap the benefits of a good vegetarian diet.

Vegetarian diets are normally healthier because many of them put a lot of thought into their everyday meals. The prominence of healthy vegetables is one large reason that a vegetarian diet tends to be healthier than the diet of a meat eater. Vegetables are usually not an afterthought in the average vegetarian diet. Treating vegetables as a main course rather than a side dish, or not including them at all, is extremely beneficial. Vegetarians mainly get their protein from different nuts, legumes, and grains rather than meat.

Vegetarians do appear to be overall healthier than meat eaters. The elimination of meat with all its harmful compounds from the diet has a large effect on a person’s body. Though the positive effects of a vegetarian diet really depends on the person. If all a person eats is vegetarian junk food, their health will still be at risk.