12 Alien Landscapes That Exist on Earth

Our earth has the capacity to create otherworldly, unbelievable landscapes that resemble something out of a science fiction movie. These 12 sights are some of the most brilliant and breathtaking weird landscapes out there. 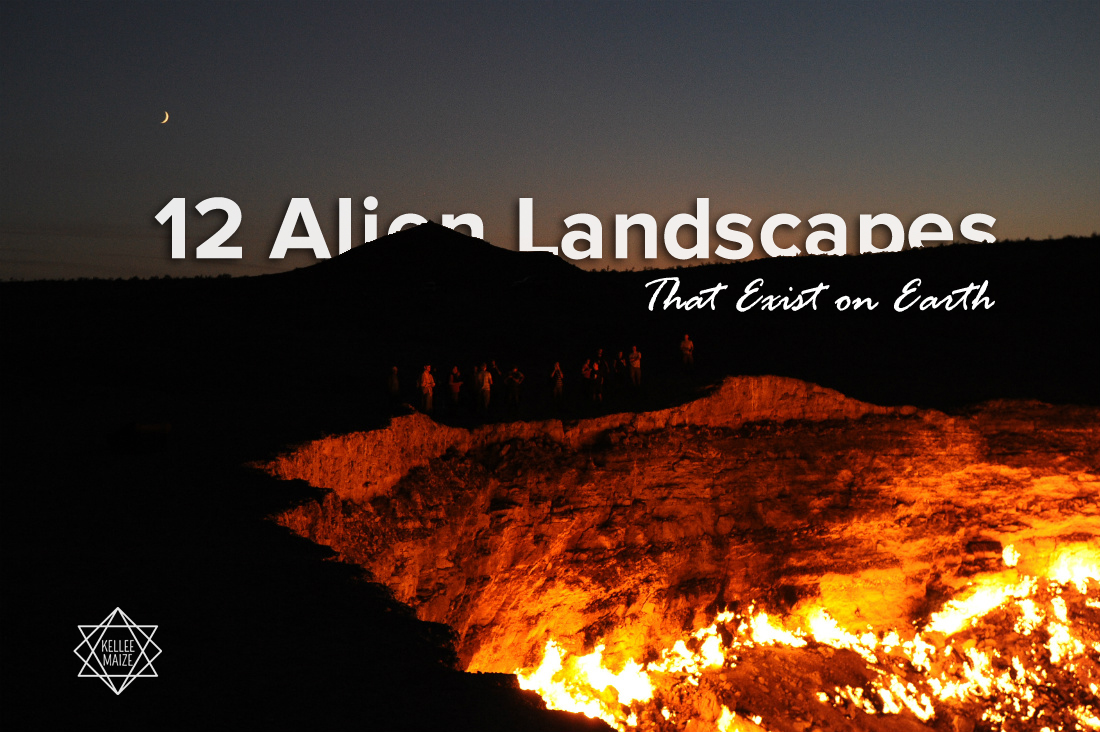 Located on the island of Bohol, the Chocolate Hills roll along the landscape and turn a dry brown chocolate hue during the dry season. This intriguing geographic oddity is classified as “conical karst topography” or large limestone deposits leftover from when the area was below sea level, although folklore provides a much more interesting origin story. They are said to be stones scattered on the ground from a battle between two giants who were hurling rocks at each other. Regardless, these hills provide a breathtaking landscape.

Otherwise known as the Darvaza gas chamber, in 1971 this was the site of Soviet geology drilling. During drilling they accidentally punctured an underground natural gas pocket which collapsed, taking the drilling rig with it. Fearing the release of toxic gas, the geologists lit the gas chamber on fire. The geologists had estimated the gas would burn off within anywhere from a few days to a few weeks. Instead, the chamber is still burning to this day. Somewhere deep within this gas chamber the drilling rig remains, burning deep beyond “the gate to hell”.

Covering an area of more than 2,200 square kilometers, the area is 95% percent dedicated to agriculture with the occasional relief left for homes and pathways. This settlement rests along the Ailao mountain range with terraces carved along for holding water and soil. While a popular destination for established photographers, tourism of the area remains near non-existent due to its distance from airports, relative isolation, and difficult road conditions. The terraces provide only one seasonal harvest between September and November. While it is an unlikely travel destination, for those who live here it provides a beautiful setting to a simple farming lifestyle.

These rock spires, or Hoodoos, bring in a booming tourist population of over two million annually. The national park provides both guided hikes and horseback riding for patrons to enjoy in this surreal landscape. Piaute folklore attributes these spires to a trickster coyote who turned people into rock, but the geographic reasoning for these interesting formations is thousands of years of wind and water erosion. This park is an all-round season affair, with the winter bringing an equally fascinating sight of snow-covered Hoodoos. The orange contrasted against the bright white of snow creates a startling and brilliant color palette.

Looking like something out of science fiction, Fly Geyser began in the 1900’s as a regular man-made drilled well. Overtime, cracks began to form within the walls of the well, leaking in geothermically heated water that began to spew out of the well. Workers attempted to cap the well in vain, as the force of the water was too strong. The geyser has been spewing to this day. Its mound-like appearance is due to minerals building up along the sides of the geyser and the vivid reds and greens are due to algae thriving on these mineral deposits thanks to the nearby water. Fly Geyser has since begun to slow its spewing, but the interesting geological formation remains.

42,000 years ago the Uyani was underwater and formed the bed of a prehistoric lake. With time, the lake dried and separated into several smaller lakes. One of which dried up completely, leaving the Uyuni salt flat, a vast wasteland of dried salt. Due to being surrounded by other lakes, this salt flat receives water during the wet season which turns the entire area into a massive mirror. In addition to being visually impressive, this area is also home to fifty percent of all lithium in the world, a massive reserve of the rare mineral. While this area serves as a travel destination, it is 12,000 feet above sea level and tourists are advised to acclimate slowly to the height in order to avoid altitude sickness.

While Yellowstone Park as a whole could fit on this list, the Grand Prismatic Spring serves as an especially good example of an alien landscape. This gorgeous natural wonder is larger than a football field and deeper than a ten story building, making it the third largest spring in the world. The rings of color are formed by varying species of thermophilic bacteria feeding on the hot, mineral rich water. While not the most famous landmark within Yellowstone’s limits, it is the most photographed thanks to its striking beauty and otherworldly appearance.

Zao Onsen was discovered in the year 110 AD. While renowned in Japan for its scenic features year round, in winter it becomes something unlike anywhere else on earth. The trees become shrouded in a thick layer of snow, making the “Snow Monsters” the resort is famous for. The resort also contains one of Japan’s most famous sulphuric hot springs.

These cave clefts are located in Patagonia and have been dubbed the most beautiful cave system in the world. It’s easy to see why, water has eroded the caverns into rounded, layered shapes while clear blue waters lap the edges of its entrance. In the summer the waves appear turquoise but as the year goes on and the water rises, it becomes a deep royal blue.

The White Sands Monument is located in New Mexico and represents the largest collection of gypsum on planet earth. These Dunes create a mini-desert of pure white sand that spans about 275 square miles. The desert is relatively warm too, reaching degrees of around 100 F in the summer and 60 F in the winter.

These mounds and hills are comprised of various shades of sandstone sandwiched alongside each other. Shifting of tectonic plates juts them out and presses different colors of sandstone together while eroding winds work to reveal the differing layers. The entire process has taken upwards of 20 million years. The bright colors and interesting landscape make this a particularly popular tourist spot, drawing in visitors from around the globe to photograph these fascinating rock formations.

This unbelievable underground world is located in the state of Chihuahua and contains some of the largest crystalline structures on earth. The conditions within the cave are particularly suited to growing crystals, but these conditions also make it uninhabitable for human life. The cave rests at near 100% humidity and at 136 degrees fahrenheit, requiring extensive specialised suits to access. Without proper protection, visitors can only last about ten minutes in the cave. The water pockets within this cave are rich with minerals, part of the reason crystals can grow so easily in the cave’s confines.