Can caffeine affect your baby during pregnancy?

There’s a lot of talk surrounding what foods and drinks you should or should not have during pregnancy, and caffeine is one in particular that raises a lot of questions. Is it safe to have caffeine while pregnant? 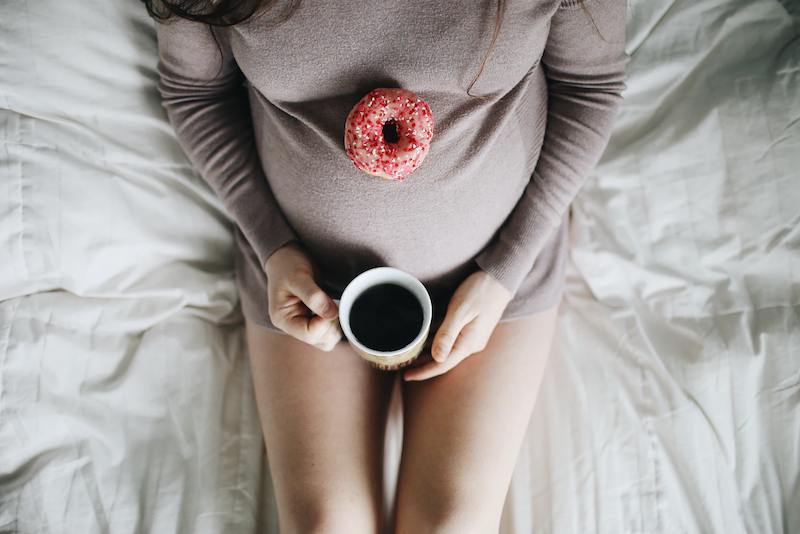 All moms, whether it’s their first or fourth pregnancy, should make sure to always consider what’s best for the new baby. One of the best ways to do that is to eat foods that will provide the necessary nutrients— when eating for two, food is extra important.

Drinks are important too, though, and everyone knows that pregnancy means no alcohol for nine months. But, what about caffeine? Will it have an effect on the baby? Are small amounts okay, or should it be avoided altogether? Is it safe?

These are all very important questions, and a lot of research has gone into figuring out the answers.

There are a lot of common misconceptions and beliefs surrounding caffeine during pregnancy, so it’s important to know what’s true and what is based on fiction rather than fact.

Caffeine is a stimulative substance that can increase your blood pressure and heart rate, which both aren’t good for the baby. You’ll take longer to metabolize caffeine while pregnant, and your baby will also not be able to metabolize high levels of caffeine like you are.

In addition, all food and drink you consume is also sent directly to your baby through the placenta to make sure they’re getting all the nutrients they need, and that would include caffeine if you were to drink it. So yes, high amounts of caffeine will have a negative impact on your baby.

In addition, a study has found the probability of suffering a miscarriage to double with 200+ mg of caffeine consumption, though other studies have found that caffeine levels between 200 and 350 mg don’t have any significant negative results.

Not only can caffeine have an effect on your pregnancy itself, it can also have long-term effects on the baby. A study has found that caffeine intake during pregnancy can have a negative impact on the baby’s brain.

21 sites across the country are collecting data for the study, entitled the Adolescent Brain Cognitive Development of ABCD study, including the Del Monte Institute for Neuroscience at the University of Rochester Medical Center.

At URMC, researchers led by the director of the institute John Foxe, P.h.D. have looked at over 9,000 brain scans from children between ages 9 and 10 who had been exposed to caffeine in utero.

Caffeine has long been found to have a negative impact on pregnancy, but now it appears through the results of this study that it also could have a lasting, negative effect on neurodevelopment— the actual structure of the brain.

Brain pathways, or connections between the brain regions, in these children look different as a result of the caffeine consumption of their mothers. Some symptoms observed in these children are more behavioral issues, difficulty paying attention, and hyperactivity.

While previous studies have shown that children exposed to caffeine in utero perform less well on IQ tests or have different psychopathology, this study’s results are much more conclusive in finding that these findings are the result of caffeine and not any other factor in these children’s lives.

So, now what? Should you drink caffeine while pregnant? If these studies are anything to go by, the answer is probably not if you want to be completely safe.

It’s not ideal, considering while your body is dealing with the stress and symptoms of being pregnant you’ll probably want a pick-me-up in the form of a cup of coffee more than ever, but you should probably leave the coffee drinking up to your partner.

Besides, if you’re pregnant, you should be trying to get a lot of rest. Let them do the heavy lifting around the house!

If you find that you simply can’t go without caffeine, however, the most important thing to do is make sure you limit your caffeine levels while pregnant. The less caffeine, the better, which is why avoiding it entirely is probably still your best option so you don’t accidentally have too much.

In addition, some studies say that 150 mg of caffeine would be too much while others claim that double that is the maximum. One cup of coffee, however, is on average 137 mg of caffeine, so if you stick to just the one cup then you should be limiting yourself effectively.

However, you should definitely discuss caffeine with your doctor if you want to keep having coffee while pregnant, because they can probably give you the margins best for you as they’ll know your specific situation better than whatever online research says.

You want to do what’s best for your baby, and your doctor will know what’s best for both of you. Keeping both you and the baby safe and healthy is more important in the long-term than whatever energy a cup of coffee can give you.