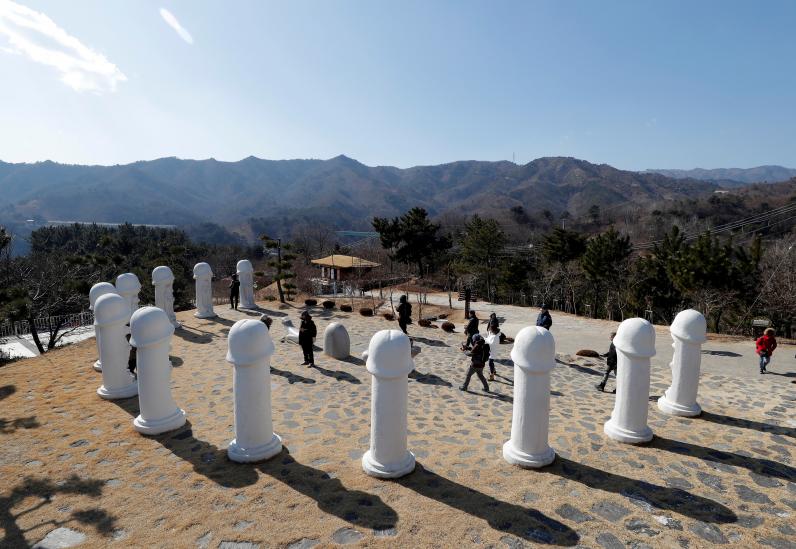 Tourists from around the world are making a quick visit to Haesindang Park in between competitions for the 2018 Winter Olympics. Also known as Penis Park, the public space features phallic statues and artwork ranging from totem poles to wind chimes.

There is an ancient legend surrounding the unique park's beginnings. According to the story, a young maid took her husband's boat out to harvest seaweed. The weather soon turned bad, and the husband was unable to rescue his wife in time. As a result, she drowned. Afterward, villagers were unable to catch fish and blamed the maid's death for their misfortune. In an effort to appease her, the villagers built wood carvings and held religious ceremonies for her. From then on, the villagers were able to fish successfully again. The place where the maid supposedly died is called Aebawi Rock and the building where the religious ceremonies were held is called Haesindang. Locals actually continue to hold rituals there twice a year.

According to the BBC, South Korea's birth rate was at an all-time low last year. Only about 360,000 babies were born in 2017. Low birth rates lead to a decrease in the number of workers available as well as an increase in welfare rates among the elderly. The government is currently trying to increase support for unwed mothers. "We want to expand support for single mothers and also launch campaigns that will change people's perceptions of couples living together," said an anonymous finance ministry official. The Korean Herald reported that families with at least three children would receive priority for child care facilities and teachers with at least three kids could choose whatever school they wanted to work at.

The park is also home to South Korea's largest aquarium theater, which features folk materials that show visitors the lifestyle of fishermen of the East Sea. There is also an arboretum, a botanical garden comprised only of trees. A bronze statue that tells the ancient legend of how the park was founded is displayed nearby.  If you're looking for a unique and interesting attraction in South Korea, this is definitely the spot for you. You will definitely come out of it with an interesting story to tell your friends.